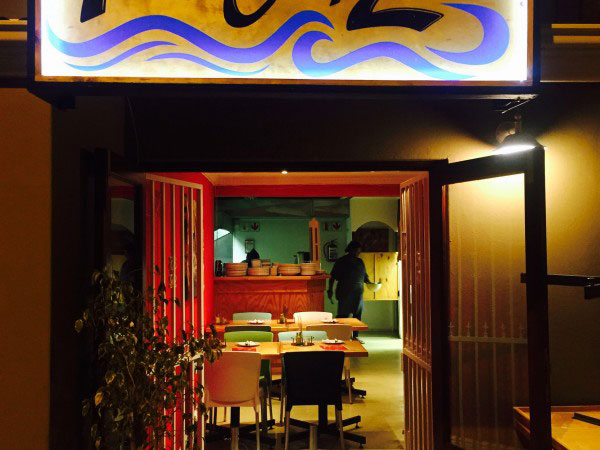 In the latest instalment of his Forked Tongue column, Ami Kapilevich finds nirvana in authentic Durban curries at Àvàla Gińjala in Cape Town.

There’s a new Indian restaurant in Harfield Village. So new, in fact, that it has three names.

Emblazoned above the entrance is a large sign that says ‘First on 2nd’ (the name of the previous establishment). In front of the restaurant is a blackboard with ‘The Mustard Seed’ drawn on it and, below that, ‘Àvàla Gińjala’, which, we later learned, means mustard seed in Hindi.

We’d booked a table here because it billed itself as ‘authentic Durban curry in Cape Town’. Now, as far as I’m concerned, there are only five, maybe six, types of cuisine that can or should be qualified as ‘authentic’: Thai, Italian, Indian, Mexican, Chinese and possibly Greek. That’s because the food of those countries is so good that it has spread throughout the world, and in so doing, has either garnered a local twist or lost a bit of its soul – or both. By that I mean that some of these cuisines have evolved to suit local palates (see: bunny chow) and some have spawned fast-food chains that have, by their nature, affected the quality of the original dish (see: chicken chow mein).

This is not to make any value judgments on commercially or culturally appropriated food. I’m told you can get a damn fine green curry at a Thai franchise in Bryanston. And if the residents of Cape Town’s northern suburbs demand that their sushi be deep fried and served swimming in flavoured mayonnaise, who are we to condemn them? Eat and let eat, I say. But these instances are precisely why you’d vaunt the real deal with the authentic tag.

So what, fellow restaurant goers, is an ‘authentic Durban curry’? Driving to Àvàla Gińjala, I was convinced that the proprietors had simply used the word authentic because it sounded nice. They had not thought about it as much as I had, I told myself, opening the car window to avoid suffocating on my own smugness.

North Indian curries use tomato bases rather than coconut milk or yoghurt, and their biryani is dry rather than wet. And there are also some important cultural differences, like whether you eat your poppadoms with your main meal or dessert. (When in Durban, with dessert.) 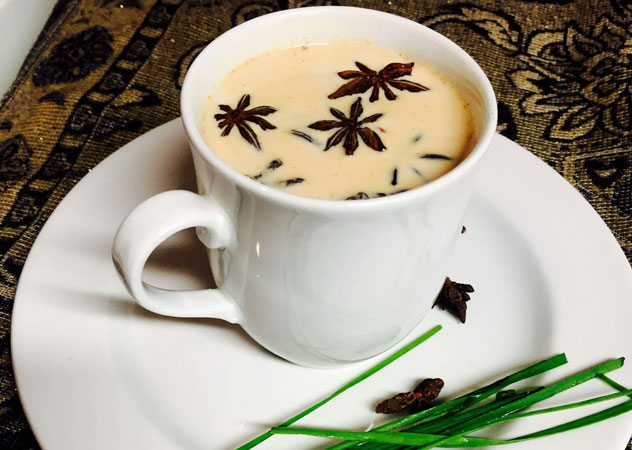 A warm and spicy drink at Ávála Giñjala. Photo supplied.

Kimberley’s mom, Pam, makes her own spice mixes. She sources ingredients from Durban, but dries, grinds and mixes the spices here in Cape Town. Pam is also the chef at the restaurant. The family moved to Cape Town from Durban a few months ago, after Kimberley returned from a stint in the USA.

“The mustard seed is a symbol of faith,” Kimberley told us. “Just a tiny bit can move mountains.” She was a charming host; we found ourselves basking in her presence each time she visited our table.

My companions for the evening were Denis and Adrian (of Fat Harry’s infamy). Denis is an old school friend whom we hadn’t seen in a very long time. These days he looks like a Sicilian mafioso: portly, trench-coated, slicked back hair, sideburns, and with a lazy confidence of someone who has had an enemy tied up in their boot. If I didn’t spend three years of Latin in high school with Denis I would have found him intimidating.

Denis is a ‘businessman’ whose hobbies included hacking backroom poker machines and chilli-eating competitions. Here is a man, I thought, who knows his way around a curry.

For starters we ordered a range of samoosas and chilli bites. The chilli bites were a bit oily but the samoosas were exquisite, with gossamer pastry and conversation-stopping fillings. The lamb and beef inside was well textured: grainy without being chunky, and moist but not soggy. A little triangular miracle.

For main course, we went for pretty much all the curries: lamb, chicken, butter chicken, and chicken tikka, with a combination of rotis and rice. (There was no beef that night.) We asked Kimberley if their curries were hot. Not really, she replied, but they would make a plan for us. 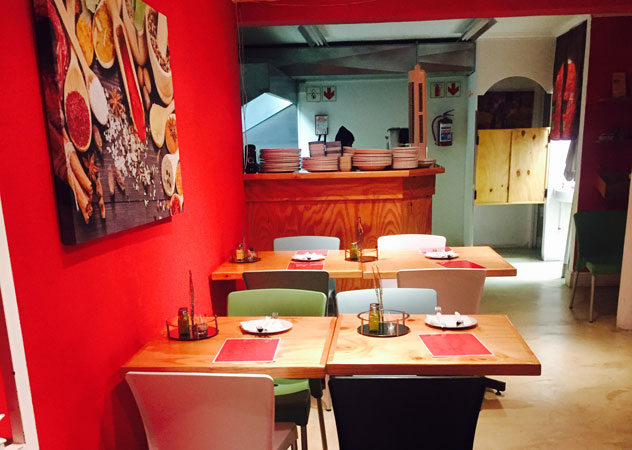 The lamb curry stole the show. The meat fell off the bones like a Sunday morning, and the sauce was psychedelic. It was the middle of winter but I was transported to an equatorial beach, where mysterious spirits leapt from bonfires and sang wordlessly to snake-like ropes. Pam Naidoo had risen to our chilli challenge.

She’d obviously overheard Denis telling us about his competitive chilli eating endeavours, the highlights of which included narrowly missed out on a Guinness World Record for eating eight habaneros in a minute, and the time he scoffed 29 spitfires and 29 habaneros in five minutes but had to stop for a nosebleed. “I don’t really like habaneros anymore,” Denis said. “Maybe I had one too many.”

While the chicken tikka (masala style, so made with an onion-and-cream base) and the butter chicken (also cream-based) were too mild to make much of an impression, the chicken curry was exquisite: a deep, rich, red dish. A lavish dish. The potatoes had absorbed about half a centimetre of the tomato-based sauce, and the heat was perfectly balanced, like a warm mid-winter oesophageal hug. With benefits.

By the end of the evening, Àvàla Gińjala had completely changed the way I thought about authentic food. Family-run small takeout joints are not always the soulless offspring of a spreadsheet. And, over time, local twists on traditional classics can develop their own authenticity.

What separates authentic food from culturally appropriated moneyspinners has absolutely nothing at all to do with origin or intention, and everything to do with who is in the kitchen. Pam Naidoo makes her food with a love that she had inherited. That much is absolutely clear.

Àvàla Gińjala is a gem. A little piece of Durban pride in the Cape Town suburbs. An Indian family has moved to the mountain, and their flavours will one day move mountains.