When we hear of the credentials of the chef at EB Social Kitchen & Bar, the new restaurant linked to Exclusive Books in Hyde Park Corner, we have high hopes. Australian executive chef Russell Armstrong has experience at three-Michelin-starred restaurants in France and the UK, including Le Gavroche. Eat Out critic Hennie Fisher goes to put the restaurant through its paces. 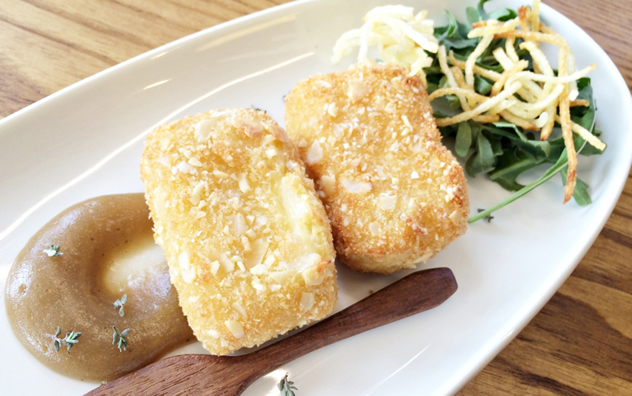 The food at EB Social Kitchen & Bar. Photo courtesy of the restaurant.

Things to nibble on – the menu lists these under ‘small plates’ – include charred sourdough with a brandade (salt cod) butter; goose-liver parfait served with brioche and sweet-sherry foam; and Swartberg Mountain olives, smoked garlic and roasted nuts. Other small plates include crisp bagel wafers with burnt brinjal, aïoli and olive cheeks; a selection of Neil Jewell’s charcuterie with pickled pepper and sourdough; shaved hand-cured bresaola (they use separate carving machines for pork products, in the interests of Jewish and Muslim customers) served with warm potato salad and watercress; and a spinach, feta and lemon spanakopita. Alternatively, you could order a few freshly shucked oysters with salt water dressing to enjoy over your Sunday morning newspaper. 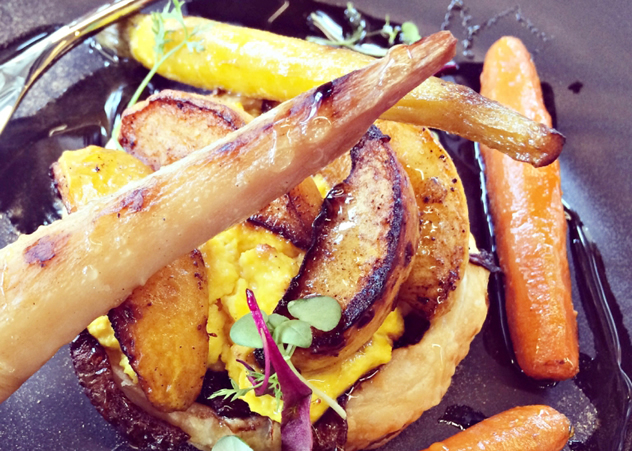 A main course at EB Social Kitchen & Bar. Photo courtesy of the restaurant. 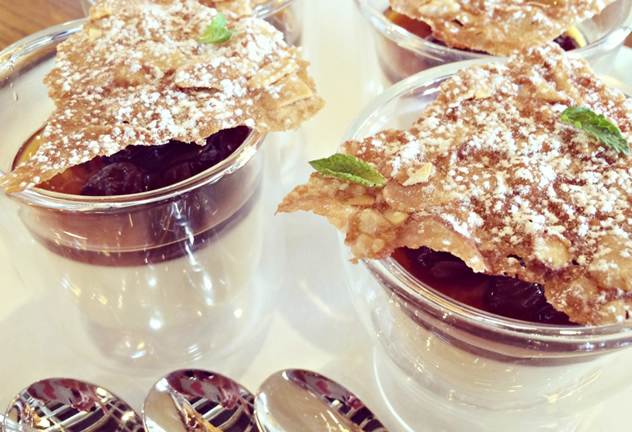 Almond panna cotta and handmade dentelle with minestrone of summery fruit at the EB Social Kitchen & Bar. Photo courtesy of the restaurant.

Sadly, the food at EB Social Kitchen & Bar doesn’t quite live up to its descriptions and our – admittedly – high expectations. A little freshness and wow factor is lacking, and the prices are very high for the portion size and quality. It’s still early days, however, and perhaps the new kitchen is still settling on a menu and ironing out the creases.

Before you do anything else, you should try some of their delicious cappuccinos, served in design-savvy silicone-grip glasses on rectangular wooden saucers, with sugar cubes in a little gold sack on the side. The drinks and wine selection is extensive, and encompasses a range of the best craft cocktails, beers, ciders, and draughts like Wild Beast Stout. There is also a comprehensive selection of Ronnefeldt teas, and considering that the restaurant shares a space with the Hyde Park Exclusive Books, the cocktails have been named after famous novels: think Breakfast at Tiffany’s; The Scarlet Letter or a Pride and Prejudice. Wines and sparkling wines are on the pricy side (such as Graham Beck Brut Rosé at R530) but by carefully considering the options, you could enjoy the 2013 Newton Johnson Felicité at R240 – a fresh wonderfully well-made wine with lots of classic pinot noir flavours and nuances. Other interesting wines include Delaire Graff Botmaskop, Tierhoek Grenache Noir and Raka Malbec. 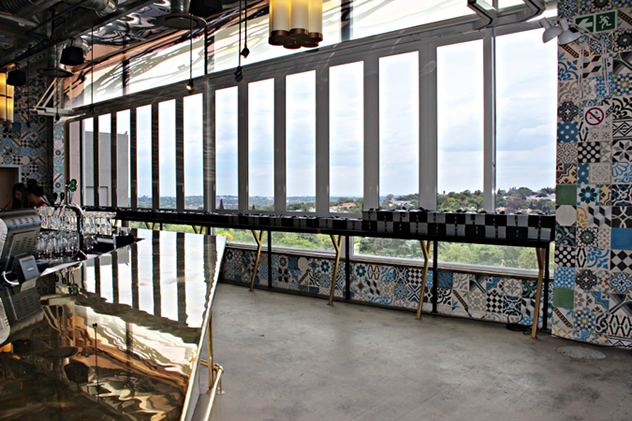 A meal with a view at the EB Social Kitchen & Bar. Photo courtesy of the restaurant.

Booking a table, arriving and being escorted to the table was carried out with professionalism and enthusiasm. The structure of the menu, which categorises items as ‘very small plates and jars’, ‘more plates to share’, ‘from our Josper oven’ and ‘small sweet plates’ might result in the wait staff not understanding that five individual people might want their orders served simultaneously. Although the restaurant claims to be happy to serve any of the shared items as a single serving main course, it is not clear that the kitchen always gets the message that all dishes should arrive at the table simultaneously. Although there were a number of serving staff around, there seems to be a need for a floor manager to ensure clear communication between the service staff and the kitchen – and that mistakes are rectified soon enough for the meal to still be salvageable.

The large, airy space is a delightfully quirky mix between a New York loft, a large bookshop and a warehouse kitted out with a lovely mix of mid-century and art deco furniture. Where previously the Hyde Park Exclusive Books was slightly poky, it is now an inviting open space with the restaurant right at the back. It has an expanse of large windows opening up to let in the fantastic Highveld weather and views over Johannesburg. The large open kitchen allows unobstructed views of the action, while a wrap-around bar with high chairs and a similar section along the large windows allow you to indulge in a coffee or quick bite while taking in the vistas. The cutlery, glassware and napery are simple and design-forward, if not always particularly user-friendly. 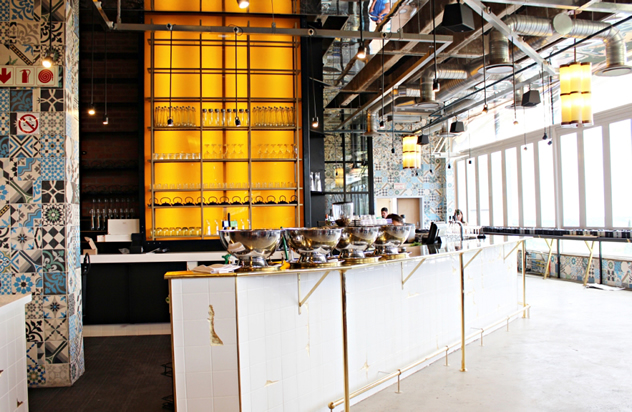 The buffet table at the EB Social Kitchen & Bar. Photo courtesy of the restaurant.

One of the trademark characteristics of a great restaurant is its service. Even though our young waiter is extremely helpful and attentive, the proper way to deal with the misunderstanding would be to discreetly remove the two plates that arrive first, with an indication that they will be re-plated and sent out with the three remaining plates. Instead, the blunder worsens with plates arriving one after the other with intervals of as long as 6 to 7 minutes between – with the result that one of our party has already finished his plate and while somebody else is still waiting for their food.

It’s still very early in this new eatery’s lifetime, so these niggles will no doubt be addressed in time.

Have you been to EB Social Kitchen & Bar yet? Let us know what you thought in a review.