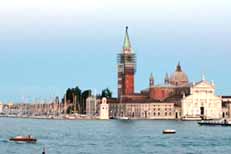 Abigail and Reuben Riffel (from Reuben’s restaurant in Franschhoek) were invited to attend the San Pellegrino Cooking Cup in Venice in July.

This is essentially a yacht race mixed with a culinary competition, where chefs from leading restaurants all over the world compete by cooking their unique dishes for the judges to taste.

Think fifty premium boats, ten of the world’s top chefs and two yacht races. Chefs battle against time to prepare their speciality – actually aboard the yacht – before they reach the finishing line.

Of course, if you read between the lines, this is a blissfully inspirational event, where you get to punt your flavours with passion whilst wining, dining and sharing ideas with a plethora of world-class talent – all in beautiful, dreamy Venice.

The Guardian newspaper calls it one of the most ‘outrageously indulgent events in the world’. Sounds like a dream? It was. Take some time out and read all about it in Abigail’s diary:

30th June
After spending a night at the boutique hotel, The Enterprise in Milan, Reuben and I got up early to see what shopping we could cram in before catching the first class train to Venice. It was early and Reuben was in pursuit of a Prada store or at least Zara as his luggage unfortunately did not arrive with us.

However, we soon forgot the shopping as we ooh’d and aah’d over boxes full of baby marrow still with their flowers attached and crates of porcini. I got so excited at the sight of the Parma hams that I nearly knocked over a tower of Parmeggiano wheels plonked in the middle of this fab supermarket.

And we hadnt even seen the markets yet!

After spending a good hour in the shop, the baker pulled an enormous loaf out of the oven, ready for you to buy a wedge and fill it with super ripe tomatoes, basil and Prosciutto. I told Reuben I thought it was a great idea for his restaurant.

On our way home from Tuscany we would have another night in Milan and a day to shop (and boy did we shop). We were soon on the train after eating a focaccia on the station stairs. It took three hours to get to Venice station – what a great way to see the plush scenery.

We arrived to Italian flags hanging from balconies all along the way, as it was the end of the soccer World Cup. We were going to the San Clemento Hotel, it was hot and loads of people queued for a water taxi. A very tanned Italian man loaded my bright pink suitcase, but still no sign of Reubens.

We whizzed away zipping past ancient buildings, churches, hotels and homes. Reuben and I stood snapping away with the Italian flag waving behind us. We passed gorgeously grand hotels, crossing fingers that one would be ours. We edged up to a busy jetty in front of a pink palace (the entire San Pellegrino Cooking Cup was being hosted here: delegates, chefs and journalists from all over the world).

I tried to eye the hotel in the distance through the grand old gardens, rows of trees and flower beds – it was sheer opulence! We sipped chilled bottled water – the still Aqua Pana and the sparkling San Pellegrino. We signed in and got a quick glance of Terry Durak (I wondered if Jill Dupleix was with him too!).

We joined the rest of the world teams later at an Italian dinner and feasted on antipasta, pastas and tiramisu as well as loads of wine and more of the best bottled water. I sneaked off before the soccer quarter final started though, as we had an early morning start – each chef and journalist would have to go off to Rialto market to shop for the event. And I couldnt wait.

After feasting on the most delicious pots of coffee yoghurt (a bit like panna cotta) and slices of Parma ham with sweet icy melon, I made my way down to the jetty.

Reubens luggage still had not arrived – what about the gala dinner that night on the island? Again, we soon forgot about clothes as we buried ourselves at the market. Shopping list in hand we ran about buying little bags of wild berries, micro greens and fresh prawns in between the squeals from the live snail man and the live eel man! Are you sure you dont need a bunch of peonies Reuben – any excuse to buy them!

And then I spotted Jill in the cheese shop with Terry – they were buying chunks of cheese to take back to London.

We spent the rest of the day following the yachts and eating tiny tastings of panzanella and antipastas of all sorts, with more wine and loads more water – the flavoured San Pellegrino waters are fab, my favourites being chino, rosso and Mandarin. I also got to meet great chefs and journalists from Dubai and Greece.

At about 5pm we headed to the island (where the event ended) to cheer the teams in and to see the final presentations of all the food. While I was waiting I couldnt resist taking a peek of the gala dinner venue. It was breathtaking! Hosted in a huge open air grassy courtyard surrounded by verandahs and colosseums. It looked like a princess was about to be married.

The yachts came in and proudly showed their finished dishes to the panel of judges, with Jill and Terry heading up the British judging team.

I tried to see where Reuben’s team was, I needed to take some pics. Someone then mentioned that Reuben was not so well…

Later, we saw blue rice that resembled the sea. Black rice. Gondolas filled with seafood and yachts filled with clams! I recognised Reubens immediately – all stylish and just Reuben!

We all started to make our way back to the hotel. I found Reuben and his luggage had arrived, at last! At the awards ceremony, we feasted on all the local and traditional dishes, partied, watched soccer and sat through the whole ceremony in Italian, but I didnt mind as the MC (who I had seen on MTV the night before) was a very good looking Italian boy!

Our last day, and we could do anything we wanted. We caught a water taxi into town and shopped a bit. I bought a Venetian glass ring, lots of lattes and treated Reuben to lunch, but I had a few conditions – it had to be at place on the water with gondolas outside and red geraniums! Well I got it all and a ride back to the hotel in a gondola!

We spent the afternoon feasting on vongole, crab, fish, oysters and wine. We talked food. It was heaven and the bill was all so well worth it.

Our last evening was spent dining outside right on the water’s edge at the hotel with the last few remaining guests who were going on the same tour as us – to Tuscany to see the beautiful wine estate Frescobaldi, to Florence and to the Aqua Pana and San Pellegrino sources, of course fitting in a trip to the Prada factory shop and then back to Milan.

We did loads more shopping as the saldas were on (thats the sales). I packed my extra suitcase and prayed it didnt go missing at Cape Town International.