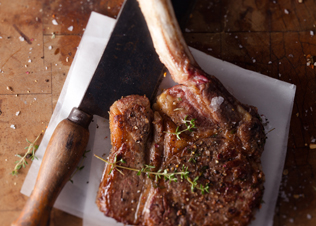 Winner of the Paddock (fresh) category of the 2013 Eat Out Food Network Produce Awards, Greenfields Farm is famous for its free-range beef. How does this farm in the KwaZulu-Natal Midlands produce the best healthy and ethical red meat in South Africa?

Free-range beef
Greenfields Farm, just outside Mooi River, has raised beef since 1893. In 1998, Adam and Cathy Kethro acquired the property and returned it to its roots as a cattle farm.

General Manager Mark Muncer and the Kethro family live on the farm, constantly keeping an eye on the 3000 head of cattle. This number of animals may seem, for a beef producer, quite low – you could find over 50 000 animals standing in the feedlots of commercial beef farmers – and the Greenfields cattle will grow much slower than their concentrated-grain-fed counterparts.

But this is because Greenfields Farm does it the ethical way. They follow the four main pillars of ethical beef production: free access to food and water, in large pastures; freedom from sickness and disease; freedom from pain and suffering; and freedom to express natural bovine behaviour. No stimulants, hormones or routine antibiotic are used in the production of Greenfields meat.

As Mark explains, “We adhere to the natural, old-fashioned practice of raising cattle. We make hay and grass silage bails all throughout summer to feed over the winter months, and all the production animals are on grass pastures and veld throughout their lifetime.”

James Makoto is the butchery manager, in addition to 19 staff on the butchery side, and 20 on the cattle farming side.

“Adam Kethro is particularly involved in the food production side of the business. We are basically grass farmers, growing enough grass and hay to feed our cattle all year round. We all live on the farm, so we’re never not at work.

“We do run around a lot,” Mark says, chuckling.

Certified and audited
And there is a lot to do to keep standards high. Greenfields is certified free-range and independently audited. The process is assessed from field to fork, with restaurants and retailers being included in the auditing process.

“There is a protocol that governs what is labelled ‘free range’, and we are audited according to that. Twice a year, unannounced, we will be visited and inspected. The philosophy governs everything from the calves being born to the way the meat arrives back in the butchery. The animals must also be kept happy, healthy and un-stressed.”

When Mark started at the farm in 2011, Greenfields had already adopted this non-commercial way of raising beef. In the years since, Mark says the food revolution has encouraged people to learn more about where their food comes from.

“Consumers are more interested in the provenance of what they’re eating these days. And it’s not only meat: the wine industry has been like that since inception. Now people want to know about where their apples or pears are grown – and so they should.”

The business
How does it all happen, from the luscious farm pastures to the package you buy at the butchery?

“Every day on the farm is different, but our weekly routine is pretty much the same. On Wednesdays, the animals for slaughter are selected. We slaughter on weight protocol, so the 30 heaviest animals (who are in peak condition), are chosen.”

On Thursdays they go to the abattoir 28 kms away, close to Estcourt, and the process usually starts very early on Friday morning. The beef is hung and chilled at the abattoir over the weekend, then returned to Greenfields butchery first thing on Monday, where the cutting, boning, slicing and dicing begins.

Mark says he likes to see clients at least every six weeks. “We won’t do business with you unless we’ve met you. We’re a really small company and we like to see who’s buying our products, what they’re going to do with it, where it will end up. It helps us keep the personal touch.”

From coffee shops to five-star hotels, everybody wants special treatment, in some way, says Mark. “And we try to accommodate them.”

For example, Delaire in the Cape winelands orders four-week dry-aged steak, and winner of the Best Steakhouse at the 2011 Eat Out DStv Food Network Restaurant Awards, The Local Grill, features Greenfields beef prominently on their menu.

“But the one that’s really fascinating for me is Post, in Braamfontein, Joburg. They do amazing sirloin prego rolls and burgers, cooked by the same person who takes the order and brings it back to you,” Mark enthuses.

“Post has been undying in their support of us. They’re really an under-the-radar coffee shop, serving the best of everything. It’s unusual to find such quality in what looks like a regular coffee shop. It’s a delightful surprise.”

As a retail outlet for the farm, Greenfields runs a deli and butchery in the village of Nottingham Road just around the corner, which is open 7 days a week to service the local community and visitors to the Midlands.

Mark says it’s their priority to keep the Notties butchery stocked, but they also deliver to Durban twice a week, ship via airfreight to Cape Town twice a week, and send a vehicle to Johannesburg every Thursday.

Unusual cuts
With its processed beef products, Greenfields uses all natural and organic spices where possible. They also make use of a fruit extract as a preservative in their wors and other sausages, and only natural casings are used. The majority of Greenfields beef is dry-aged.

Everyone eats steak, says Mark, but what he’d like to encourage is trying one of the “variety of treats” from a beef animal. “Something like shin, slowly braised with bacon and baby onions, and Asian-style short ribs are phenomenal!”

Steak is Greenfields Farm’s biggest seller, but they also prepare rolled briskets – for casseroles and slow cooking – as a staple, which you won’t find in a lot of other outlets. Sales of the more unusual cuts of meat are still slow, but Ros Foyn, the ‘keeper’ of the Greenfields Farm Butchery and Deli is always an eager proponent of nose-to-tail eating.

Mark explains, “Yes, it is for the more adventurous cook. But my advice is: be a bit daring. Try something you haven’t tasted before.”

Where to buy Greenfields Farm free-range beef
At the judging for the 2013 Eat Out DStv Food Network Restaurant Awards, the juicy rib-eye on the bone had everyone in the room drooling – judge Pete Goffe-Wood in particular. We were hard-pressed to save one of the steaks for photographing. (Following the shoot, however, it seemed miraculously to disappear….) Eat Out editor and judge Abigail Donnelly reckons one of the best ways to enjoy the rib-eye is simply seasoned and grilled to rare perfection, with a horseradish-flavoured whipped cream to enjoy alongside.

Buy Greenfields beef seven days a week at the butchery and deli; at selected Spar and Pick n Pay supermarkets in KwaZulu-Natal and Gauteng; and at Wild Organics in Cape Town. You can also visit www.greenfieldsfarm.co.za or email mark@greenfieldsfarm.co.za to chat to Mark about orders.

Read about our other 2013 Eat Out DStv Food Network Produce Awards winners in the (dairy) cheese, bakery and dairy (other) categories, as well as winner of the best new product award, Bacon Jam.