The menu is designed to appeal to non-vegans and meat lovers. As such, it tends towards accessible food – the kind you might make for yourself – rather than groundbreakingly innovative dishes.

In some cases, this approach works well. The red lentil stew with spices, sautéed spinach, chopped sambals and brown rice (R75) is subtly but sufficiently spiced, and makes a hearty main meal. The crispy potato quinoa croquettes are also a hit, thanks to a delicious garlic aioli.

In other places the kitchen could afford to be a little more adventurous. The loaded lentil potato skins would benefit from a kick of spice, as would the butter bean bunny chow (although this is really not bad value at an affordable R60.) The lentil shepherd’s pie with caramelised onion mash doesn’t quite live up to the rich flavour its name suggests. Some fresh coriander and some different textures wouldn’t go amiss here. 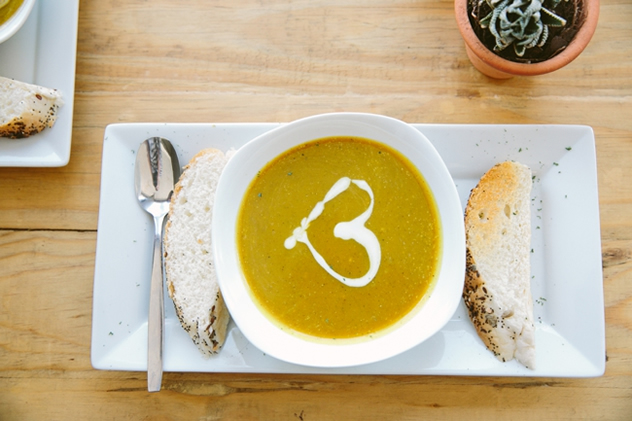 Conscious 108. Photo courtesy of the restaurant.

For dessert, we sample the raw cheesecake – frozen, almost like a parfait ¬– which is quite tasty, along with a very crunchy ‘snap’ bar which shoots across the table as we bite it, but is sweet and toothsome.

It’s worth noting that, despite eating three courses, we leave feeling healthy and comfortable, which is a rare thing after indulging in a meal out.

Coffees are served with soy, almond, rice, coconut or oat milk substitutes. There are also freshly squeezed juices, smoothies and ‘un-milkshakes’ made with soy milk and syrup. The restaurant recently acquired a liquor licence, so craft beers, cocktails and wine will be available soon.

The staff are friendly and hands-on.

Charcoal walls, bare wood and a profusion of triangles and prominent light create a hip interior, but this is a slightly quieter part of the Greenside area, so would suit a relaxed midweek meal, rather than a raucous party or romantic meal. 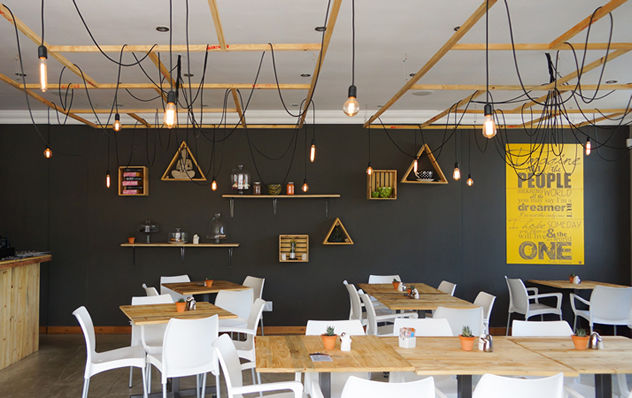 Conscious 108. Photo courtesy of the restaurant.

While we feel there’s room for a bit of adventure in some of the dishes, we can recommend this as a great spot for an affordable end-of-the-month meal, or a quiet, relaxing bite during the week that will leave you and the earth feeling just a little bit healthier.

Have you been to Conscious 108 in Greenside? Share your experience by writing a review.