Wednesday, May 8th, 2013 by Katharine Jacobs 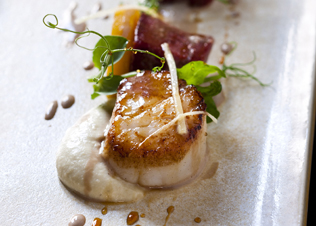 Instagram menus, veggies for dessert and African ingredients: internationally, there are some exciting food trends taking off. We checked in with some of our local top chefs to see what’s going to be hot this winter in South Africa.

Africa’s where it’s at
Now is the time for Africa, according to Paris-based trends analyst, Li Edelkoort, who spoke at this year’s Design Indaba. Fashion is going artisan, but African prints aren’t the only thing that’s hot. Teff, an Ethiopian staple grain, is the new quinoa on the international scene and it’s fitting that several top local chefs are drawing ideas from traditional African ingredients more than ever before.

David Higgs of The Saxon’s Five Hundred is one chef who’s been exploring. “I’ve just been up to Namibia and was quite inspired by what I saw there,” says David. One dish that’s just been added to his menu recreates a Namibian desert scene. “We’re using kameeldoring – quite a fragrant wood – to smoke porcini mushrooms,” David explains. The soup dish also uses another Namibian product, !Nara oil. “It’s buttery and rich; a great winter dish.”

At Hartford House in KZN, chef Jackie Cameron is creating a gourmet version of the traditional samp and beans. It’s made with zebra beans from Enaleni Farm, winners of the Eat Out DStv Food Network Produce Award for South African Heritage, and also incorporates ‘Frieda’s green cabbage’, a recipe Jackie’s domestic worker used to make for her as a child, crispy carrots and capers, and beef tongue that’s cooked sous vide for 35 hours. “We’ve been brainstorming dishes with the whole team around childhood memories,” explains Jackie, and their winter menu is likely to feature nostalgia-inducing favourites for South Africans from a variety of cultures.

At La Colombe, meanwhile, things are going micro local. “We’ll be doing a type of ‘roadtrip’ through the Western Cape,” says chef Scot Kirton. “Each course will be dedicated to that specific town, with a wine paired from the town too. The ‘trip’ will start at Constantia Uitsig, with a sauvignon blanc granite, rose geranium from the farm, candied rose petals and shattered grapes; and stop in at Franschhoek for Three Streams’ fantastic trout, as well as regions like Elgin, the Swartland and Cape Point.

At The Greenhouse at the Cellars Hohenort in Cape Town, chefs Peter Tempelhoff and Gerald can der Walt will be using wild herbs, African staple veggies, wild mushrooms and fruits in a new African wild tasting menu.

Adventures with venison
If you were squeamish about the meat-labelling debacle, now’s the time to educate your palate: hunting season has opened several chefs are embracing wild meats more than ever before.

“We feel that SA chefs don’t explore this natural resource enough,” says Peter. “It is a sustainable source of protein and less harmful to the environment – unlike cattle.” On the cards for The Greenhouse winter menu are takbok, nyala, springbok and wild game fish cooked over wood and herbs.

At Roots at Forum Homini, chef Adriaan Maree is lucky to get fresh venison such as blesbok and springbok directly from the farm. “We hang it ourselves,” says Adriaan, “and use the whole animal in a variety of dishes.”

You’ll also find plenty of game on the menu at Overture, Pierneef à La Motte and Five Hundred this winter. We love the sound of David Higgs’s ostrich liver with beetroot and pomegranate, and hear there’s also warthog and impala to be had.

On the autumn menu of Eat Out’s restaurant of the year, The Test Kitchen by Luke Dale-Roberts (named One to Watch at the recent World’s 50 Best Restaurants Awards), you’ll find fynbos-cured blesbok, with springbok liver parfait and eland marrow.

Eat your veggies
Veggies have been in the spotlight for some time, but it seems diners are driving this trend, too. “We’re getting a lot more vegetarian and vegan diners,” says David. While previously they were seeing one or two per month, The Saxon is now getting at least one or two per day.

Babel, Jordan Restaurant, Delaire and a host of other winelands restaurants grow their own fruit and vegetables, and we’re thrilled to hear that The Saxon now has its very own organic urban garden, a 20m by 30m space on the roof of The Saxon Hotel. “We feed the entire restaurant and its staff from the garden,” says David. The Upper East Side Hotel in Woodtsock also has a rooftop garden of herbs and greens for pestos, salads and garnishes.

Mushrooms reign supreme
“We’re not even supposed to get mushrooms now, but they’re everywhere, and so many different kinds,” says Chris Erasmus of Pierneef à La Motte. He’s putting them into multiple dishes such as smoked-watermelon-glazed beef rib-eye with grilled pine rings; and rose-glazed sweetbreads with cep mushrooms and organic bacon ragout. “That thing of not repeating an ingredient doesn’t really apply here,” says Chris, dismissing the old-school golden rule of menu construction.

Plenty of other chefs are getting excited about seasonal bounty, too. The Test Kitchen is test-driving morel marmalade and porcini powder, while La Colombe’s Scot Kirton and his team are foraging in Tokai forest for nature’s gifts.

Quirky desserts
And veggies are so trendy they’re even making it into desserts now. Fancy some parsnip cake, chocolate courgette cake or cauliflower and raspberry cheesecake? We’ve even seen one recipe for cake made with squash.

Luke is working rosemary and olives into his desserts, with a lemon mousse served with rosemary tort, olive shards and lemon foam.

And at Roots in the Magaliesburg, Adriaan is drying flowers grown on the farm to create a range of teas, from hibiscus to elderflower.

Also read about 10 food trends we wish for 2013 (including bacon-print fabric) and the magical rise of the peanut butter trend.