In the mix with Reuben Riffel 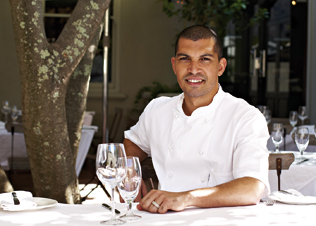 The story of Reuben Riffel’s rise is no secret. The chef – who now has not one, but three restaurants to his name – grew up tasting the tidbits his mother brought home from her restaurant job, and worked his way up the ranks from a waiter to head chef, after the previous head chef, Richard Carstens, left unexpectedly.

However, it was in 2004 – after a stint in England – that Reuben won both Chef of the Year and Restaurant of the Year at the Eat Out Johnnie Walker Restaurant Awards, and the Franschhoek-born chef was catapulted to fame.

Today he’s cooked with Martha Stewart, been interviewed by the Wall Street Journal, and has become something of a household name in South Africa, thanks to his endorsement of Robertsons Spices.

And while there’s been a mixed (and sometimes amusing – not safe for sensitive viewers) response from the food community, Reuben seems unashamed of the association. When quizzed earlier this year during a panel discussion, he pointed out that while fresh, premium ingredients may be de riguer in the top establishments, there are plenty of food lovers in South Africa for whom that kind of luxury is out of reach. Touché, Reuben. (And after all, if Gordon Ramsay can endorse Checkers, can we really criticise our local boy for his support of a local brand?)

With three restaurants – Reuben’s in Franschhoek, Reuben’s at the One&Only Cape Town and Reuben’s at the Robertson Small Hotel – as well as recipe books, cooking courses and sponsorship deals, there’s no doubt that Reuben is a busy man. So has his role shifted, since becoming a restaurateur? Does he miss the thrill of the kitchen?

“It has shifted, and obviously – or unsurprisingly – it is something that took some time to get used to. You become more aware of your own limitations and have to start relying more on the people around you, which is not always a bad thing.”

He admits there’s still plenty to learn, but says he does enjoy the business side, too. And though the time he spends in the kitchen may have reduced, he certainly still puts in the hours in the kitchen, particularly during season when there are fewer other commitments. “I enjoy the busier season and like to be part of the brigades,” he says.

Right now, Reuben is working on a new summer menu. “Our style is very much focused on keeping dishes simple, fresh and full-flavoured with a few twists. We are working on a delicious slow-cooked octopus dish with oven-dried tomatoes, pernod-mustard aioli, basil chilli and olives.” Other fresh, summery dishes include a chilled sweet melon and lemongrass soup and a strawberry gazpacho with sour cream.

Some of these ideas seem to hearken back to the first memorable meal Reuben ever ate: oysters poached in Champagne with leeks, salmon roe and lemon cream. (Tasted in the first kitchen he ever worked in.)

Inspiration comes, he says, from ingredients, the sheer enjoyment of creating dishes, and his fellow chefs. He’s also a closet recipe book hoarder. According to an interview with the Wall Street Journal, Reuben has over 250, a habit he blames on the fact that he didn’t go through the usual training to become a chef. “Even now I feel I might not be versed in everything,” says Reuben. His favourites? Neil Perry, Andrew McConnel, On the Line by Eric Ripert and Eleven Madison Park.

He also admits to being a fan of French chef Joel Rubochon, who boasts the most Michelin stars of any chef for his dozen restaurants around the world; David Chang, founder of the Momofuku restaurant group (of crack pie fame); three Michelin-starred French chef Pascal Barbot; and yes, Jamie Oliver.

So what does he think of the young up-and-coming chefs in SA? Is the future bright?

“There are many talented chefs out there. Ultimately it’s the ones who grab opportunities and who can balance kitchen duty with running the business side the best. I think at all the top Cape establishments there is plenty of potential; some of them just still lack the belief,” he says.

And what about Reuben himself? What’s on the boil?

“I’ve got too many plans at the moment! I’m hopefully doing a local South African cooking programme that entails some travelling and meeting some extraordinary people. My big dream is to travel to some places I haven’t been before; food destinations like Mexico, Peru etc. I think there I can learn more about fresh, new flavours.”

That said, he hasn’t forgotten his hometown, and still gets nostalgic for tomato bredie, the way his mother used to make it. “We’re planning some fun things for Franschhoek as well as Groendal, the community I come from,” he reveals.

Reuben will be one of the industry leaders participating in the panel discussion at the Eat Out DStv Food Network Conference, taking place on 24 November 2012. A limited number of tickets to the full day of festivities is still available. Click here to find out more and book yours.