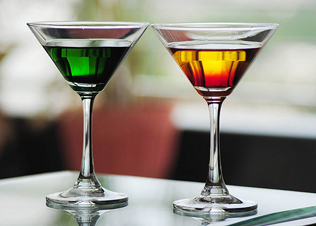 Liqueurs always seem so mysterious. Those gleaming bottles with vivid liquids, elaborate ribbons and wax seals are quite overwhelming to the untrained eye. What’s in Galliano, exactly? Why is Curaçao electric blue, but orange-flavoured? And does absinthe really make you hallucinate?

They’re also a versatile bunch. The same liqueur can appear in your granny’s glass after dinner and in the most wicked concoction at the club at 1am. Many liqueurs began their lives as medicinal drinks, but have since evolved to become the source of illness on modern mornings after. (We’re looking at you, Jagermeister).

To be properly old-school, order an aperitif before a meal to stimulate the appetite, and a digestif for afterwards. And while the International Bartenders’ Association has a list of official cocktails, we’re more concerned about getting to know the liqueurs in them first. This (almost) A-Z list will take you through the best of the herby, fruity, floral, sweet and bitter lot.

Absinthe
This anise-flavoured spirit is derived from botanicals such as wormwood and fennel. Also known as the green fairy, it was outlawed in many countries due to its supposed psychoactive properties. (Since proven false.) Absinthe was a favourite of many prominent artists, such as Vincent Van Gogh, Oscar Wilde, Henri de Toulouse-Lautrec and Ernest Hemingway. Many enjoy the ritual of drinking absinthe with accessories like silver slotted spoons, sugar cubes and special glasses.

Advocaat
A custardy liqueur from Holland, made of egg yolks, brandy, sugar and vanilla. Thick advocaat is often sold at markets, where it is eaten with a wooden spoon.

Amaretto
This almond-flavoured liqueur is made with almond or apricot pits. Try this recipe for affogato at home.

Bénédictine
This aromatic liqueur is made according to a secret recipe developed by monks in Normandy in the nineteenth century. Made with herbs, roots and sugar with a cognac base, it is often mixed with brandy in a B&B cocktail.

Campari
This bitter Italian apèritif has a dominant orange flavour and a dark red colour. Made from the infusion of herbs, fruit and spices in alcohol, Campari is often served with soda water before a meal. Try this ruby grapefruit and Campari granita for your guests. (Or just for yourself.)

Chambord
This decadent French liqueur dates back to the seventeenth century and is said to have been enjoyed by King Louis XIV. Chambord is produced in the Loire valley in France and is made from cognac, red and black raspberries, honey, citrus peel, vanilla, herbs and spices.

Cointreau
This orange-flavoured family member of triple sec is made with bitter orange peels from Spanish, Brazilian, Haitian and Ghanaian fruit. Try the Cointreau-politan or Pretty in Pink at home.

Crème de Cassis
A speciality in Burgundy, this sweet and dark liqueur is made from blackcurrants.

Crème de Menthe
Flavoured (and sometimes coloured) with mint leaves, this old-fashioned sweet liqueur is served as a digestif, in cocktails and in desserts. It can be either clear or green.

Curaçao
This liqueur comes in a striking electric blue colour, but can also be orange, green or clear. It is made with the peels of small bitter oranges called laraha (native to the island of Curaçao), spices and sometimes Port and rum.

Drambuie
This historic Scottish liqueur is 46% alcohol by volume, golden-coloured and made with malt whisky, honey and herbs.

Frangelico
With a bottle shaped to resemble a monk, this hazelnut-flavoured liqueur is said to derive from the recipe of a friar called Angelico in the fifteenth century. Made from an infusion of toasted hazelnuts with alcohol and water, it also has flavours of toasted coffee, cocoa and vanilla. Try this Elephant’s Reverie cocktail as a dessert.

Grand Marnier
Numerous cognacs are blended and flavoured with distilled bitter orange to make this French liqueur with a naturally rust-orange hue. It is served neat as a digestif, used in cocktails and in desserts dishes such as Crêpes Suzette.

Jagermeister
This liqueur, produced in Germany with 56 herbs and spices, was originally developed as a digestif with medicinal properties.

Lemoncello
This sweet Italian dessert liqueur is made with the zest of lemons.

Maraschino
Made from marasca cherries, this bittersweet liqueur has an almond-like flavour that comes from the cherry pits.

Ouzo
This popular Greek apéritif is anise flavoured and has a high alcohol volume.

Pernod
Several aromatic herbs and plants complement the distinctive anise flavour in Pernod. (It can be used as an absinthe replacement.)

Pimm’s No. 1
This brand of British-style ‘fruit cups’ is gin-based and tea-coloured. It has a subtle flavour of spices and citrus.

Sambuca
Flavoured with oils from anise, liquorice, elderflowers and other spices, this Italian liqueur has a distinctive flavour that you either love or hate.

Southern Comfort
This American liqueur is made with a whiskey-flavoured base and fruit such as peaches.

Strega
Saffron gives this Italian herbal digestif its yellow colour. Other ingredients in the brew (strega means ‘witch’ in Italian) include mint, cinnamon, juniper and fennel.

Triple Sec
This colourless orange-flavoured liqueur is made from orange peels and can be enjoyed neat, on the rocks or in cocktails. Some variations include the addition of orange-flower water and orris root.

Vermouth
Vermouth is not a liqueur as such, but this fortified wine is used in many cocktails like the martini (with one of our other favourites, gin). Additional alcohol and aromatic herbs and plants materials like roots and bark are added to the base of grape wine to make a sweet or dry vermouth.

Now grab your shaker and swizzle sticks (see these 30 great cocktails to get you started), or sit back at a restaurant and sip these liqueurs straight.