MasterChef 2 episode 9: the proof is in the pizza 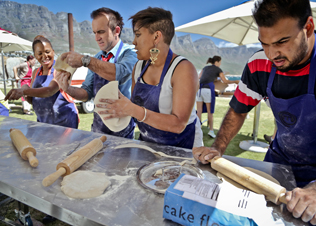 “It’s only going to get harder!”

The scene was set: trendy food-trucks at Camps Bay, a holiday snap of quiet serenity.

Only 14 contestants arrived on that scene after we lost the brave financial analyst, Tumi, last Wednesday. He just-just didn’t make it through the pressure test of replicating a bouillabaisse after a sensory test elimination round identifying cheeses.

Last night we saw how two teams of seven contestants each organised themselves to compete for the production of the most delicious savoury pizzas, followed by tastiest dessert pizzas. Our relaxed, shirts-out MasterChef judges, Andrew Atkinson, Benny Masekwameng and Pete Goffe-Wood, arranged for ten of South Africa’s top food bloggers – among them Aubrey Ngcungama, Nomi Matlala, Fritz Brand of Real Men Can Cook, Andrew Lieber of Gourmet Guys, Sam Linsell of Drizzle and Dip, Thuli Gogeli of Mzansi Style Cuisine, Candice de Noury of The Gorgeous Gourmet, Thando Moleketi of Jozi Foodie Fix, Luvo Ntezo (sommelier at One&Only Cape Town) and Ishay Govender-Ypma of Food and the Fabulous – to be the pizza judges.

Two cute trucks rolled up – but seven panicking people into galley kitchens do not fit, no matter how nicely equipped. The first frenzy was finding all the ingredients in the equivalent of a trolley dash on the sunny lawns of Maiden’s Cove.

Prepping time was 45 minutes, including the proofing of the dough. The pizzas were suitably ambitious: the red team almost had blackened duck breasts (courtesy of Neil and fast-flaming gas jets) and the blue team had to rethink and replace their seized mascarpone (courtesy of Herman’s zealous beating). There were another 45 minutes to complete and present the pizzas.

Against that picturesque blue serenity, it was comic mayhem in the foreground: pizzas flopped and folded in front of erratic pizza ovens that sizzled white chocolate to carbon, and the southeaster flung flour, toppings and herbs right across the beach. In one tightly packed galley, sugar was spun over someone’s shoulder. Pizzas were banged into boxes only to be turfed by the wind.

The suave bloggers seemed oddly oblivious of the berserk food comedy. Through it all, the red team delivered savoury pizzas of crispy-edged, pink slivers of duck and chorizo on caramelised onion with rocket. The blue team produced chorizo and mozzarella pizzas with chanterelle mushroom cream.

The bloggers tweet-voted their delight at the duck pizzas, a vote of nine out of ten, with only one vote going to the blue team’s savoury efforts. “No-one thought it would be this bad,” mourned blue Kamini. It meant that their tiramisu pizzas with a trio of ganache and basil coulis, crowned with spun sugar, would have to get all ten votes to swing the win from the jubilant reds, who had already presented their stoned peaches and crème fraîche pizzas with thyme-infused white chocolate.

Indeed, the spun halos beguiled the blogger-judges. There were pronouncements of “succulent” and “sexy”, versus the unfortunate reception of the red team’s efforts. The tweet-vote was a perfect ten for the tiramisu pizzas, leaving the red team as sudden losers.

Tonight the red team goes into an elimination round, while the blues enjoy their win of a Top Tips session at Pierneef à La Motte with chef Chris Erasmus.

By Marie-Lais Emond Tune in on Thursday morning for a run-down of Wednesday’s episode, and check out our MasterChef SA page, sponsored by Nederburg, for weekly updates.