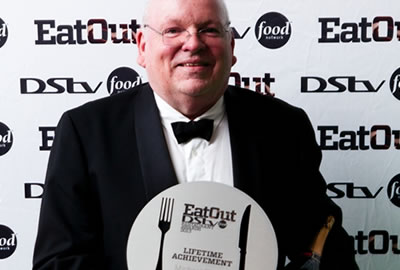 Food and wine guru, former restaurateur and media personality Michael Olivier was named the winner of The Lannice Snyman Lifetime Achievement Award in Association with Paarl Media at the 2013 Eat Out DStv Food Network Restaurant Awards this November. We asked Kamini Pather, one of Michael’s foodie friends (who also won the second season of Masterchef SA earlier this year) to interview the award-winning man met die pan.

It may not have been Michael Olivier who said, “Wine improves with age. The older I get, the better I like it,” but it may as well have been. He was raised on a wine farm in Durbanville, which is where the seeds of his passion were first planted, but his appreciation has grown along with his expertise.

He recalls with starry eyes, “As small children, we were given a glass of wine at meal times. Well, it was half wine, topped up with water, of course”.  This is where it all started, his lifelong affair with wine, food and the wonderful friends that one shares it with. 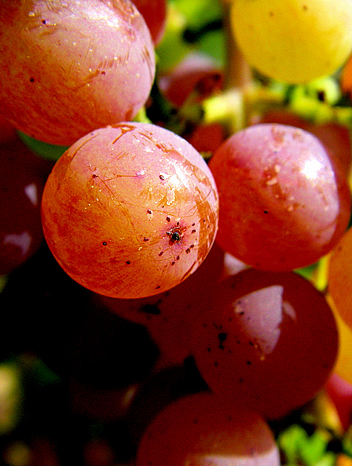 There can be a lot of pomp-and-ceremony when it comes to wine appreciation. I like to take a rather simplistic approach and I know that Michael shares my sentiment. To put it simply: if you like it, keep drinking. Case closed.

While Michael has lived in Europe and tasted wines from elite cellars around the world, he’s still very in touch with what the regular Joe will enjoy on the palate and in the pocket. My guess is that it’s because his take on wine is a rather sensual one, and he has a remarkable talent for remembering all the wines he’s tasted. When faced with flavour combinations, he is able to tap into his repository of wine memories and make the connection.

Michael’s special “wine moments”, as he calls them, stay with him to this day. “In 1981/82 our friend brought over two of the biggest crayfish we had ever seen. We had a bottle of Tavel rosé. I can still, if I think hard enough, remember the exact taste of that crayfish with the homemade mayonnaise and the rosé.”

It’s clear that food, wine and friends are deeply personal to Michael, which made his stint as a restaurateur a logical step. The Cordon Bleu experience that Michael gained whilst working overseas stood him in good stead when his fine dining restaurant, Parks, opened its doors in Constantia. I had mentioned to a few friends that I would be interviewing Michael and Parks made an impression on many of them.

Michael admits to having toyed with the idea of making his dream wine. “A barrel-aged red” is what he would want to create. He isn’t sure of a name or even if winemaking’s really on the cards, but there’s no harm in living in a perfect world, even if it’s just for a moment. 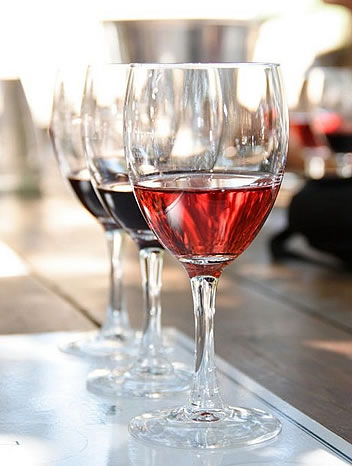 In the media spotlight

All of us foodies have been following Michael Oliver on twitter (@manmetdiepan) and on Facebook for updates on wine events, pairing ideas and of course his Wine Of The Day posts. I enjoy them because he understands the breadth of the wine world, highlighting both braai-time quaffers and something a bit more special.

Michael has been part of the wider food-media world as well. He was one of the founding members of Crush Mag, one of SA’s first digital food magazines. He also does regular food inserts on SABC 3’s morning show, Expresso. (He got the gig after working in Consumer Relations for Pick n Pay for a number of years.) Michael doesn’t seem to share my giddy excitement for live TV, however. The fear of messing up still plagues him, even though he’s been doing it successfully for 3 years. There was only one slight booboo “when the butter caught alight,” he admits.

“Paying it forward” is a motto that holds true for Michael. He’s in constant contact with peers and food-loving friends via social media and digital streams, and he really understands the value of sharing experience and knowledge. “It’s my way to giveback to an industry that has given me so much,” he offers, with his trademark modesty.

Abigail Donnelly, chief judge and editor of Eat Out, explains why he was chosen as the worthy recipient of The Lannice Snyman Lifetime Achievement Award in Association With Paarl Media: “Michael has mentored countless chefs: so many of the country’s best have passed through his doors in one way or another.

“Notable for his complete involvement in the industry, Michael knows everyone and has a story about everything. He is compassionate, considerate and kind. He takes time with people and he is unfailingly supportive of his peers. His whole life is about the industry and that’s why he thoroughly deserves this award,” she concludes.

It’s almost a month since the 2013 Eat Out DStv Food Network Restaurant Awards, when Michael’s name was called, but he’s still reeling. “To be given an award like this and to be in the presence of people I love and admire, who have won the award before, is a great honour. I would not be here but for the support and love of my wife Madeleine and the wonderful people who have given me opportunities in life,” he tells us.

Finally, Stephen van der Walt, CEO of Paarl Media, weighs in: “Paarl Media would like to congratulate Michael Olivier on receiving the prestigious Lifetime Achievement Award at this year’s Eat Out Restaurant Awards. We commend Michael’s dedication to his craft and relentless pursuit of excellence.”

As we sit, drinking tea for this interview, Oliver greets many passers-by. He introduces them to me by first and last name, something I find quite charming. Once they pass, he shares a story or two about each one. The last friend to walk past was once the mayoress of Cape Town. And then it dawns on me that Michael could very well write the food story of this great city that I have grown to love.