Number 2: Restaurant Mosaic at The Orient

Restaurant Mosaic at The Orient moved up three places to number 2 in the Top 10 at this year’s Eat Out Mercedes-Benz Restaurant Awards. Watch the video and read the review to find out why.

Coming in at number two in this year’s Top 10, Restaurant Mosaic offers a special treat. The experience begins with welcoming drinks and not just one amuse bouche, but two, and a fantastic bread trolley with gluten- and lactose-free breads (careful attention is given to special dietary needs). They’re accompanied by no less than five flavoured butters, ranging from plain salted to butternut-and-calendula and honey-and-cinnamon. 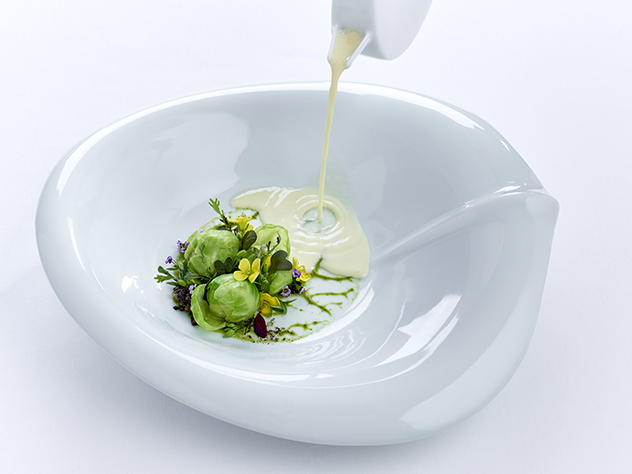 Before the eating begins in earnest, expect several other mini artworks to amaze all your senses, the most invigorating of which is an arugula-and-lemonade shooter to cleanse the palate. The current menu is named Tabula Rasa, and kicks off with a snail and slightly spicy cauliflower-and-corn mousse. Next is a dish entitled Tidal Pool, which is playful and satisfying. Goose-liver spheres encased in Brussels sprout leaves are served with a velvety cauliflower purée perfumed with truffle. This dish is followed by Sea Mist, which features a fat and tender scallop and an East-Coast lobster tail enrobed in a saffron froth, which has everyone in the restaurant in delight.

The mains options vie for first place. There’s the smoked venison with madumbi mash, duck with plum and suurvygies, and a tilapia-and-halibut duo cleverly called Where the River Meets the Sea. Cheese is always a treat here and may include a 36-month-old French Comté, or a goat’s cheese from a Johannesburg artisan with a small herd of goats. 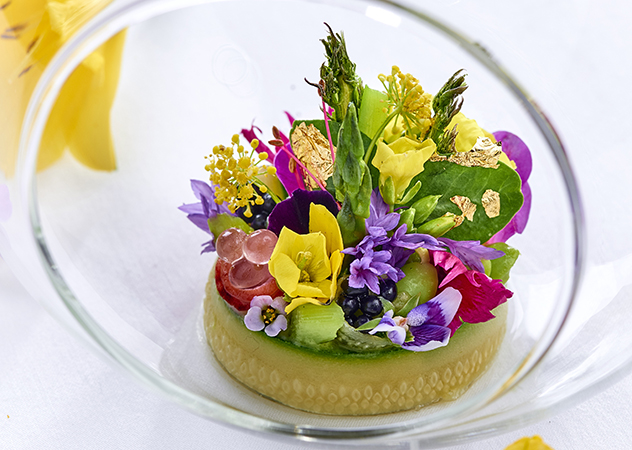 When it comes to dessert, you could opt for a sophisticated pear filled with white chocolate and a fluttering of dried pear ‘leaves’ perfumed with tonka bean, aptly named First Frost. SmartTease is a tongue-in-cheek play on everyone’s favourite candies, comprising chocolate, many colourful mini macarons and a pistachio ice-cream cone.

Moses Magwaza and Germain Lehodey comprise the passionate team in charge of all the beverages served at Restaurant Mosaic. Moses took the Wine Service Award at the 2017 Eat Out Mercedes-Benz Restaurant Awards. The wine and non-alcoholic pairings are done with the same verve as everything else in this establishment. The team has decided to replace the local and international option with a sommelier’s wine-pairing option, giving guests the chance to sample a fantastic selection of local and international wines.

The front-of-house team took the Eat Out Service Excellence Award in 2017 too. The team rarely changes and the result is that the overall service is faultless – efficient and most engaging. One needs only show a little interest for the entire team to share the pleasure they derive from their trade. It is a rare treat to find as much pleasure from service perfection as one does at this restaurant. 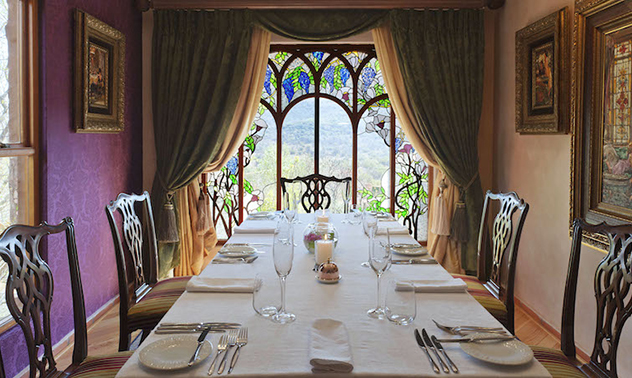 Although Restaurant Mosaic is relatively small, it can expand to various other levels of the building. At the back, past the kitchen, there’s a smaller private room with its own little lounge, as well as a larger private room off the main dining area. Banquettes and small tables line the two main rooms, which are always inviting and well-presented. Mosaic has established itself as a destination. For those who can afford to stay over, there are rooms available, which adds to the enjoyment.

Chantel Dartnall is a master at cooking protein. Whether she cooks tilapia or scallops, she is bound to make it taste its very best. Even though the food displays an undeniable delicate sensibility in both preparation and presentation, no one needs to fear leaving hungry, as Chantel knows how to cook food that satisfies on all levels.

Take a look at the rest of the Top 10 here, and the other worthy winners of 2017 Eat Out Mercedes-Benz Restaurant Awards here.