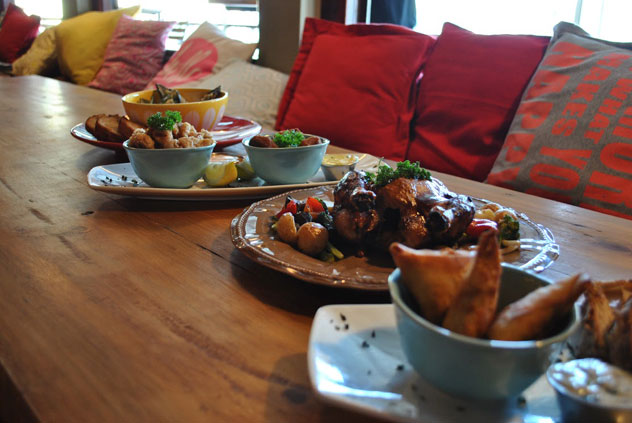 There are many benefits to old friendships, but the two biggest ones are the low maintenance, and an almost total lack of small talk.

I hadn’t seen Adrian in several months, but it didn’t matter. Within minutes of sitting down at the table we were talking about impostor syndrome (feeling incompetent), the difficulty of recognising and changing compulsive behaviours that are generally viewed as positive (like being a workaholic or a perfectionist or an overprotective parent), and Bananarama. 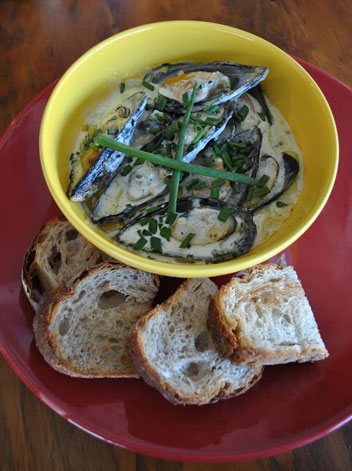 Adrian was saying things like, “You’ve got to let the software discover itself.” Which is the sort of thing that you should only say to a very close friend, and even then only after they’ve had a few beers.

As Adrian’s fortune would have it, I had just then discovered the quaffable charms of the Brew Dog Punk India Pale Ale – an excellent alternative to the rich bittersweet goodness of my beloved Devil’s Peak Kings Blockhouse IPA. Sucks that the Brew Dog was the most expensive beer on the menu, at R59 for a 340ml bottle. But what, as my granduncle Schmuel used to say, “Can you do?”

We were at Fat Harry’s pub. Neither of us had ever been to this place before, but it seemed apt. Gone are the days when Adrian and I would hit Jo’burg on Long Street for seven pints after work on a whim. These days we need to give our wives a week’s notice and a foot rub. Fat Harry’s is in Kenilworth. (“I drove past a park on the way here,” Adrian gasped, “with people in it.”) They play Bananarama. Hell, we weren’t even the oldest men in the place!

I’ve known Adrian since high school, where we were forced to bond because loners were dead meat. Needless to say, there’s been a lot of bullshit, beer and bodily fluids under that bridge since. So it’s good to make the occasional effort.

My first impressions of Fat Harry’s were good because it’s both dark and neon-lit, which makes you feel like you’re in a movie by Robert Rodriguez, or Jim Jarmusch, if you prefer, or David Lynch if you’re a psychopath. “This menu is quite South African,” Adrian noted, “but with enough standard pub stuff on it too.” A summary that I can’t really improve on. 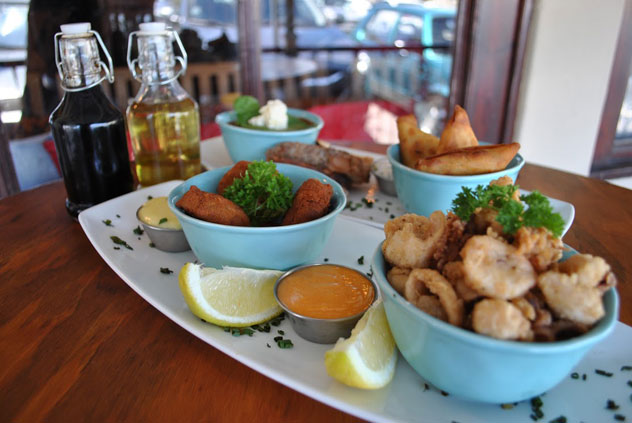 The starters are labelled tapas, which means that they’re mostly smaller portions of the mains – which, in a pub, is not necessarily a bad thing. The mains include a few interesting options: two mussels dishes, pork belly and a classic Durban beef curry, and the burgers section is substantial enough to be taken seriously.

For starters we went for the free-range chicken livers and the salt-and-pepper baby squid. For mains, we ordered the pork belly ribs and beer pairing slider board.

Chicken livers are a thing with me and Adrian. We’re both big fans of chilli, to which the dish lends itself, and once spent a week’s waitering wages at the Russian Tea Room in Hyde Park just to try their chicken livers. (They did not disappoint.)

You can tell a lot about a place by their chicken livers. That’s one dish you need to love in order to make it well, unless you’re a damned good chef. And people who love chicken livers were raised properly by decent folk. Make no mistake, chicken livers speak volumes about many things in life.

Adrian is not drinking alcohol that night because he sees his life as some sort of psychological experiment – a trait he inherited from his father, The Martian, may he rest in peace. Adrian’s on and off the booze frequently, and I’ve never known a person who has quit smoking and taken it up again as frequently as he has.

“I struggle with moderation,” he shrugs. Which is bullshit. He’s just a bit of a masochist, and almost messianically self-aware. I don’t really believe in star signs, but Adrian Frielinghaus is one heck of a Leo. 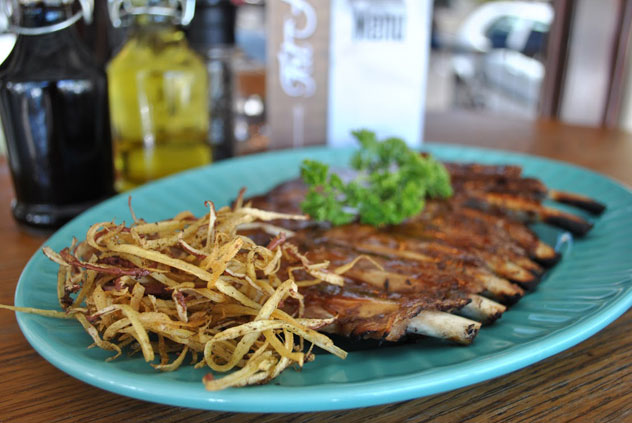 So, out come the starters. The chicken livers are well cooked but a bit bland. There’s a dollop of cream cheese on top, which is intriguing, but it could do with a bit more bite. Admittedly, we’re a tough crowd in this department. When we were waiters at the original Posticino in Norwood, Adrian and I would eat so much chilli that the kitchen staff made us chop our own. Adrian recently bought chilli plant seeds on the internet and grew a California Reaper, which, he claims, nearly killed someone. This is entirely possible.

The baby squid tubes and heads are excellent: The crumbs are dry and crisp, and the meat is soft. You need to be a bit of an alchemist to pull that off, with the quickest of dips in the hottest oil. Bravo.

The ribs, however, are a trainwreck. The basting just sits on the meat like it was slapped on as a slimy afterthought. Zero flavour penetration. A pub should be able to stand and fall solely on the quality of its ribs. Seriously, guys. And while you’re at it, lay off on the Bananarama. 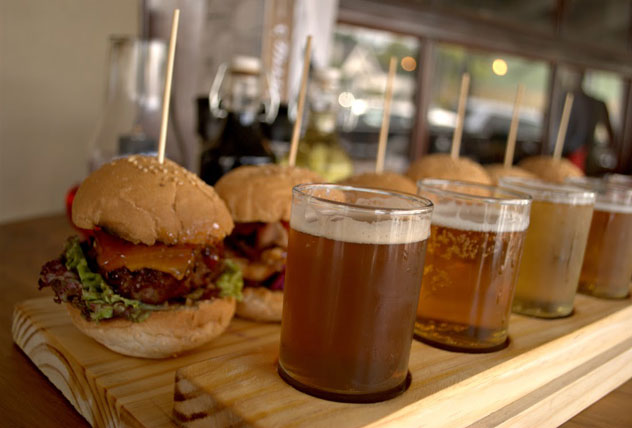 The burger menu is divided in two: there are the gourmet burgers, and the beer-pairing burgers. The gourmet burgers, for the most part, sound utterly disastrous: there’s a lamb burger with tzatziki and hummus; the banting burger comes with a Noakey mushroom; the Hoola Burger has a damn pineapple; and the Fat Harry’s Burger starts off well enough – with poached egg and bacon – but then commits banana suicide.

The pairing menu is a different story, however. Each of the sliders is available in full size, so this is a good opportunity to sample the lot. The patties are satisfactorily unique, with an interesting spice profile, and even the small ones used for the sliders are juicy enough.

Stand-outs include the Stellenbrau Burger, with melted mozzarella, tomatoes and pesto (not usually my cuppa, but there you go); the Brannas Burger, with a brandy-infused cheese-and-mushroom sauce; and the Dragon Burger, which is a chicken burger topped with bacon, a peppadew-feta relish and caramelised onions. I’m not the world’s biggest chicken burger fan, but that last one absolutely blew me away.

All in all, the food at Fat Harry’s may not have been the best in town, and the beer may be a tad pricey, and there were guys with facial tattoos getting drunk on the stoep outside. But one of the benefits of old friendships is that you’ll end up enjoying yourself anyway. Until you catch yourself tapping your feet to Bananarama.