R55 lunches and how to listen actively 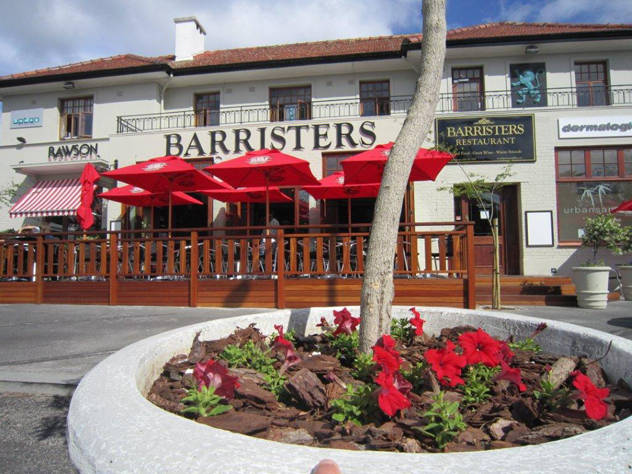 The outside area at Barristers. Photo Supplied

My wife and I do this thing where we go to Barristers Grill Café for lunch once a month. We do this because raising children is an almighty pain in the arse, so you need to make your marriage bearable by having some fun. At least that’s the theory. Michele says that it is also a good opportunity to talk about things. Which is where the wine list comes in.

The wine list at Barristers is outstanding in two respects. Firstly, the actual range and selection are great. Secondly, the descriptions are written by Lance Chandler, the proprietor of the establishment for the past eight years, and they make you want to try every damn bottle. 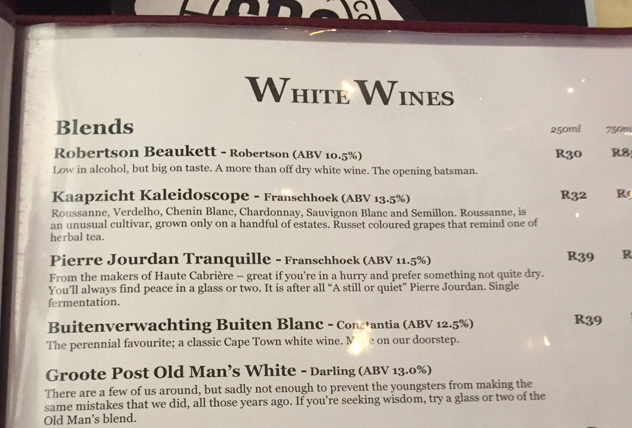 Under the Fat Bastard Sauvignon Blanc it says: “Crisp, fresh and vivid. Unlike the utterances of the gentleman sitting in the corner of the bar.”

The Nitida Semillon is “like a beautiful blonde with an astrophysics PhD” and the Robertson Chenin Blanc reads: “Why it is spelt with a ‘c’ but pronounced ‘sh’ beats me. Perhaps it has to do with the second glass?”

We decide to go for the Tierhoek Sauvignon Blanc which, Lance writes, is “only available at boutique wine shops and restaurants… how we managed to pull this off remains a mystery.”

When it arrives, the Tierhoek smells like a recently divorced cougar in the VIP section of an exclusive nightclub, and it tastes like one too. 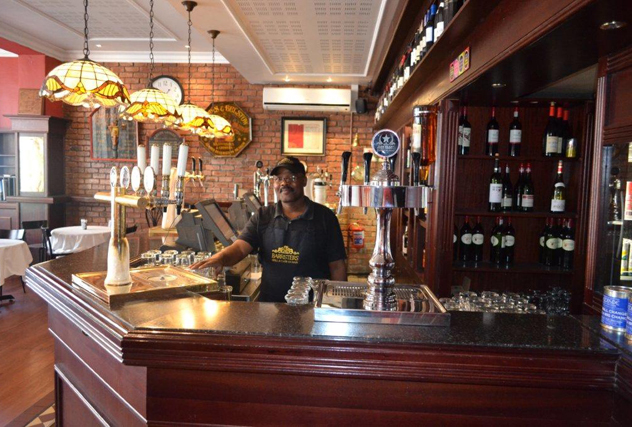 “…just bought a jacuzzi,” Michele is saying, “so when he left the office he was like, ‘Cheers, I’m off to have a jacuzzi installed. If I call you later you’ll just hear BRLBRLBRLBRLBRL in the background, so you’ll know where I’m calling from.’ It’s like he fell into the cauldron as a baby.”

I’m practicing active listening. This is the hardest thing in the entire world. It means concentrating on what the other person is saying without feeling the overwhelming need to respond. It’s like a form of meditation, except that instead of filling your mind with breathing, you fill your mind with gossip.

“…phone call from Jannie,” says Michele, “telling me the farm basically runs itself, so he does stuff like clean out barns and make sure the electricity generators are working even though he doesn’t have to. He sounds so happy. After all he’s been through, he really deserves it.”

Barristers lunches are a Southern suburbs institution because at R55 per meal, they’re the best value in Cape Town. When the waitress comes to take our order, we ask her what the special is. We always ask about the special, and one of us usually orders it. Today it’s the beef pie (Fridays are pie days), so I order that. Michele is in the mood for bangers and mash.

“…those pictures on Facebook. Imagine being able to head off on a scientific expedition to some remote island in the middle of nowhere for three months. What a life!” 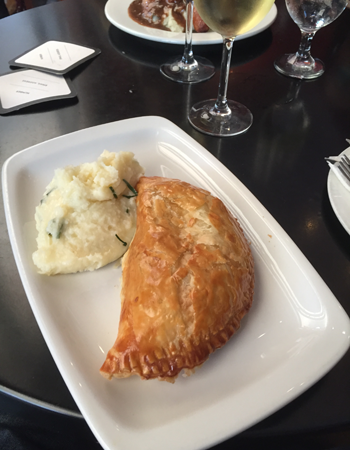 The food arrives. Michele’s bangers and mash look like what bangers and mash are supposed to look like: swimming in gravy and onions. The peas and carrots are not fresh, but I’ve never considered those to be an edible part of the meal anyway. I have a nibble of the sausage, and it’s creamy. Michele says the onions are cut too thick, but she’s wrong. You can never cut onions too thick.

My pie is very peppery. Yes, there are mushrooms and succulent beef in gravy, but it’s really all about the black pepper here. It’s a good thing that I’m a huge fan of the stuff, because this pie is making me want to grow tobacco and chop down trees. Perhaps the waitress should have referred to it as a pepper steak pie instead of a beef pie. But I don’t care.

The only casualty of the pepper, for me, is the wine. As seductive as the Tierhoek sauvignon blanc is, its charms are wasted on this pie, and vice versa. It’s like someone switched the lights on in the club. Rookie error, and one which illustrates how your choice of wine can dictate the course of your meal from quite early in the…

I look up from my food and immediately notice that Michele’s purling brook of happy natter has encountered a dam of expectation. I’ve probably given the impression that she has been doing all the talking during lunch, which is not true. Over the course of the meal we’ve also spoken about our dog’s separation anxiety, the value of sleep, and whether or not a penguin is able to lay an unfertilised egg.

But responding is a big part of active listening, and now it is time for me to respond. And the listening part is about to pay off. Listen:

“You know what I love about you,” I hear myself say. “You genuinely get a thrill out of other people’s good fortunes. Most people gossip about other people’s trouble, or just feel jealous when something goes right for others, but not you. When other people are happy, that makes you happy.”

I know, right? As soon as the words leave my mouth, I know I’ve scored. Thank you, active listening! If I were an old Chinese sage I would tell you that the best response comes from having no response at all. It’s like communication kung-fu.

Lance comes by the table. “Did you survive the Tierhoek?”

“Barely,” I reply. “But it’s definitely whet our appetite.”

I scan the wine list and order the Groote Post Old Man’s Blend, whose description reads: “If you’re seeking wisdom, try a glass or two of the Old Man’s blend.”