A serious feast at Reverie in Observatory

I have a confession to make. I’m not like the other writers on this website. I don’t rush off to book a table at the new restaurant that everyone’s talking about. I am not abreast of international culinary trends. Frankly, I couldn’t tell your dariole from my derriere. 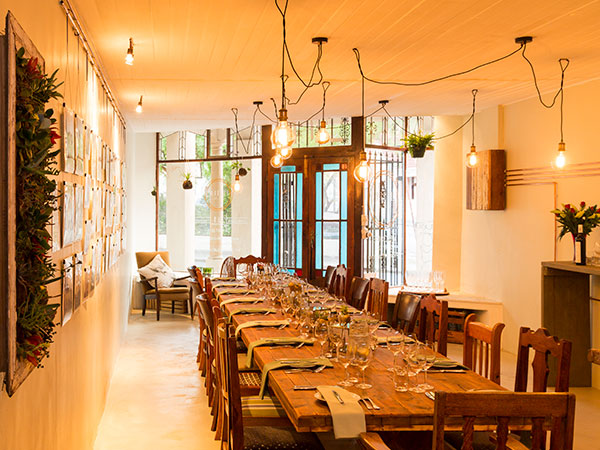 The interior of Reverie Social Table in Obs. Photo by Michael Le Grange.

So I was a little bit hesitant to book a table at Reverie Social Table in Observatory. The establishment bills itself as a “table d’hôte style” fine dining establishment, which means that you sit around one big table with complete strangers, and eat a set menu of several fancy courses. “Guests are encouraged to put away their cell phones and engage with one another.”

“That’s not dinner,” I texted Darren, “that’s an anxiety dream.”

“This whole thing started with us wanting a casual beer,” Darren wrote back, “so I can almost understand how the nuclear procurement deal got to where it is. A bit of a draft blows out a candle, torch batteries are slightly flat (because aren’t they always), next thing you know your friends have bought up the entire uranium value chain and you’ve cut a deal with Vladimir Putin.” 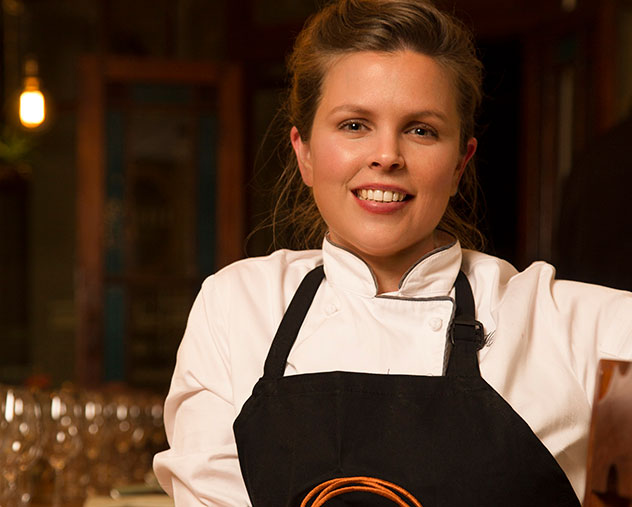 Darren and Lynda were joining us for the evening because they are our most respectable friends.

Lynda looks after piles of money for Sanlam Private Investments, and sits on the board of the Kay Mason Foundation, which puts underprivileged kids through the top schools in the country. She says things like, “A hundred and fifty million rand.” Which makes my head spin.

Darren is one of the cleverest guys I know, and also one of the most understated. He is an e-commerce geek by profession, a consummate macro photographer, and a nascent gourmand. He says things like, “Communism has never actually existed.” Which is true but still drives me crazy.

Needless to say, Darren and Lynda met doing an MBA. 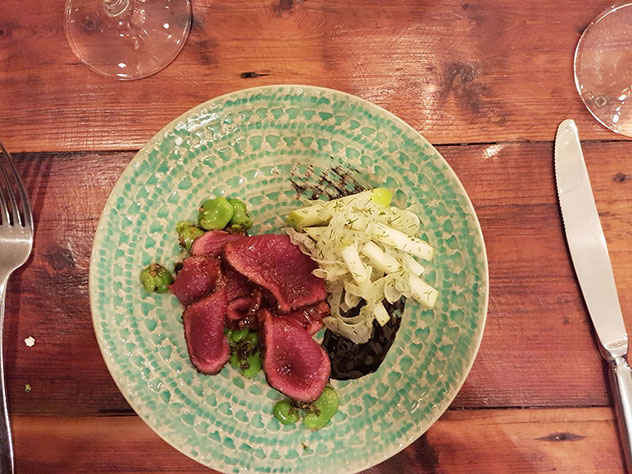 Reverie is on the ground floor of an old Victorian townhouse in Lower Main Road in Observatory. The single room is dominated by a long wooden table. There’s lots of Oregon pine, and modern art on the walls.

Darren and Lynda were making small talk with Chef Julia Hattingh when Michele and I arrived, but I was too preoccupied with seating arrangements to properly engage. The moment we were invited to sit I made a dash for the head of the table. Darren sat on my left, Lynda on my right, and my wife sat next to Lynda. Perfect. My mood lifted, and I was suddenly curious about the people further up the table. Oh well. 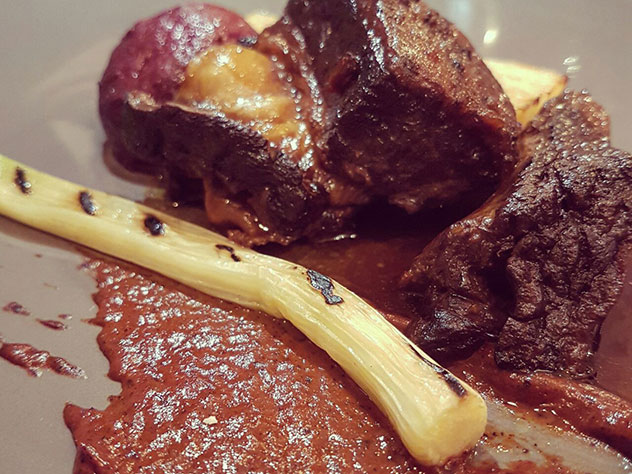 Each week there is a different food and wine pairing at Reverie. On our night, the meal was inspired by Ormonde Private Cellar from Darling.

First course was a sheep’s cheese from Beatrix – a boutique goat farm in Ficksburg run by millionaire journalist-turned-goat farmer Barry Sergeant. It was served with a nasturtium pesto and paired with the Ormonde Chenin. I wouldn’t normally eat the cheese of an animal whose milk I’d actively avoid but this was just exquisite. Matched with the “slight saltiness” of a Darling chenin, it tasted like a feta had had a baby with a brie.

Darren was explaining that some cheeses are actually related. “When you make mozzarella,” he said, “the natural byproduct is ricotta. You know: curds and whey.” 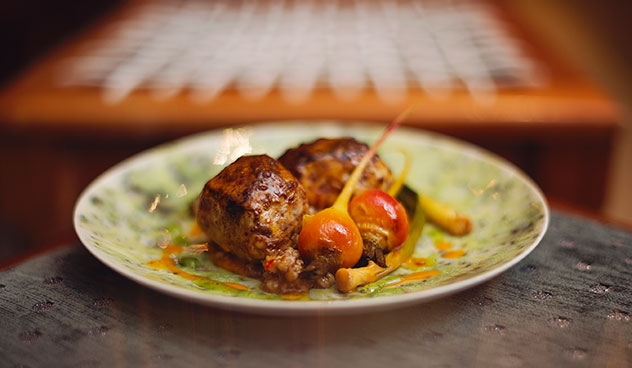 Next up was a warmed freshwater trout with a black sesame paste and beans that had been marinated in seaweed. And apple strips. I know you’re supposed to eat everything together in order to elicit the intended symphony of flavours, but I ate the apples first to get them out of the way. The trout was so moist and soft and yummy that it was more like the Platonic ideal of a fish than an actual fish.

As if her professional and philanthropic achievements weren’t enough, Lynda is also a minor Instagram celebrity, posting beautiful pictures of food under the (presumably ironic) hashtag #chubbygirldiaries. Darren, it turns out, provides additional lighting for these shots from his phone. They’re like a culinary Mulder and Scully. 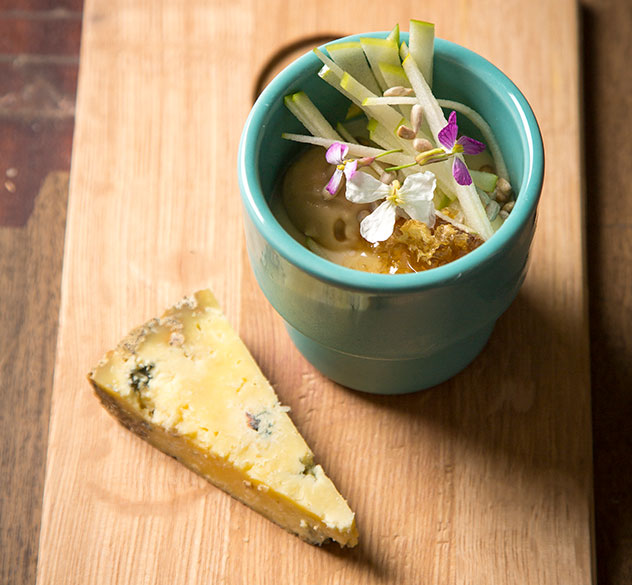 I’m a big fan of duck and liver and duck liver, but the textures didn’t quite work for me here. You had this melt-in-your-mouth parfait with quite chewy duck strips. Conversely, I am not usually a fan of sweet wines but this stuff was amazing.

“You should try the Vin de Constance,” said Darren. “A bit pricey, but apparently Napoleon was a fan.”

I’m probably making Darren sound like a bit of ponce here but you have to remember that he delivers these pearls with an almost self-effacing, professorial absent-mindedness.

At last, it was time for the main course: a blackened beef short rib and cauliflower dish with charred red pepper puree and celeriac gratin. It’s at this stage of the evening that I started regretting the chef’s delicious bread. I’m one of those people who gorges themselves on the bread at the beginning of a meal like some early hominid that stumbles across the carcass of an antelope that had died in a natural brushfire. It’s not something I am proud of.

I did somehow find plenty of space for the Ormonde Cabernet Franc. “More feminine than a cabernet sauvignon,” said Chef Hattingh. 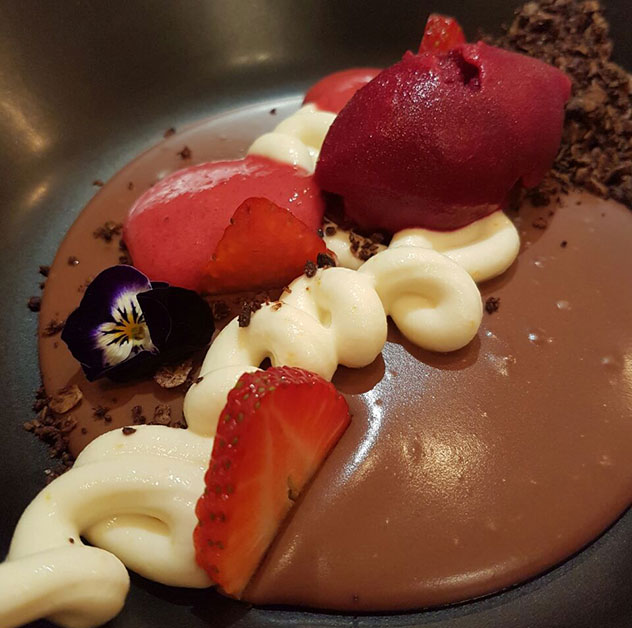 The dessert. Photo by Lynda Cooper.

Dessert – a majestic dark chocolate and fruit creation – was a bit over my head, to be honest. Lynda had one taste and immediately sort of misted over. With each spoonful she reminded me more and more of the time we took my wife’s cat on a road trip and discovered that cats have an inner eyelid – the nictitating membrane, as I’m sure Darren would call it – that they close when they are in a trance.

Darren had finished his dessert and was resting his bearded chin on the back of his interlaced fingers. My wife was leaning back in her chair, smiling in conversation. I swirled my wine glass and listened to the babble of familiar strangers.

I suppose you could say we were in a reverie.