With so many different cultures in the mix, defining South African tastes can be tricky. But take a step back and some patterns do emerge, like our enthusiasm for meat, and our love of the trio of bacon, avo and feta on everything from burgers to pizzas. Katharine Jacobs goes in search of South Africa’s favourite dishes.

1. Chicken
When it comes to fast food, South Africans really, really like chicken. According to Business Tech, chicken fast-service restaurants lead the pack. The biggest of the chicken brands is KFC, which currently boasts around 850 stores in the country. Its most popular meal is the Streetwise Two – two pieces of chicken available either with chips or with pap. Crucially, the Streetwise Two is also one of the most affordable options available, costing just R31.90 with chips or R29.90 with pap.

There’s nothing like a Streetwise Three Chips to bust that hunger one time! Show us what you’re up to this evening and tag #iFLGMoments & @kfcsouthafrica. #iFLGTakeOver

Home-grown Nando’s is the sixth biggest chain in South Africa in 2016. The most popular order? According to the marketing department, choices vary depending on whether the diner is ordering for just themselves or a group, and on the location. “Johannesburg leads the pack for ¼ chicken, single chips and a Nando’s roll (R54.90); however, KwaZulu-Natal customers love our full chicken and two, sharing the sides, the most (R179.90).” And if you’re curious about the most popular sauce, it’s the mild basting sauce, although in retail sales the hot sauce sells more. Steakhouse chain Spur also lists chicken wings as its most popular starter.

2. Burgers
The second-most popular fast-food type is burgers. This is no surprise given the prevalence of burger-focused eateries like Steers, Wimpy and McDonald’s, but they’re also a hit at family restaurants like Spur, where they are the most popular main course. At the slightly higher end of burger joints, Hudsons, which currently has eight branches countrywide, reports that its most ordered burger is The Player, which features a classic combo of bacon, feta and avocado. The Works, with mustard-mayo, cheese, lettuce, dill pickle, and sliced onion, comes in second.

3. Pizza
Banting may have changed how some consumers order, but pizza is still the third biggest segment in fast food. The biggest player, according to Business Tech’s last survey, was Debonairs, with 431 branches in SA. Gerry Nhlapo of Debonairs says the brand’s most ordered pizzas are the Triple Decker (yes, that’s three layers of pizza!), Chicken & Mushroom and Something Meaty with macon, salami, ground beef and barbecue sauce.

A photo posted by Debonairs Laudium (@debonairspizzalaudium) on Aug 23, 2015 at 3:22am PDT

Chips remain the most popular side at most of the chains we contacted. At Ocean Basket, rice and chips reign supreme, although the new grilled vegetables are becoming more popular as customers look for more healthy options. Nando’s single side of peri-peri chips remain the most popular option at the chicken chain, but there is now a wider variety of sides including pap and relish, peri-spinach and a green salad, and the Casa Pap & Nando’s Relish is reportedly climbing the charts quickly. At Hudsons, sweet-potato fries join the regular variety as equally popular options.

Milkshakes and decadent milkshakes are very popular at Ocean Basket. At Hudsons, the Cookie Monster shake – with Bar One, cookie crumb rim, whipped cream and chocolate-chip cookies – is the most popular. And while artisanal roasteries might be driving coffee consumption at the top end of the market, tea remains the South African favourite by volume. (Even at Ocean Basket, tea is the most popular hot beverage.)

How are tastes changing?

“South Africans are more educated and more adventurous, and they expect more,” says Natasha Sideris of tashas, a growing brand of eateries across SA. We’re also becoming more health conscious, mirroring the global trend, she says. While the café classics remain largely unchanged on the menu, she has kept her options open, and adapted to location by customising each branch. “When we were creating the second tashas location in Bedfordview, I realised that I didn’t want to create the cookie-cutter format that other franchisees have. Instead, I chose to create an inspiration behind each location based on the surrounding community, the demographics and the location.” (Across all tashas locations, in case you’re interested, the most ordered dish is the salmon fishcakes.)

Salmon is a big favourite at CTFM too – when it comes to sushi, with salmon roses leading the pack in that market. CTFM’s most popular dish overall though remains the classic fish and chips. 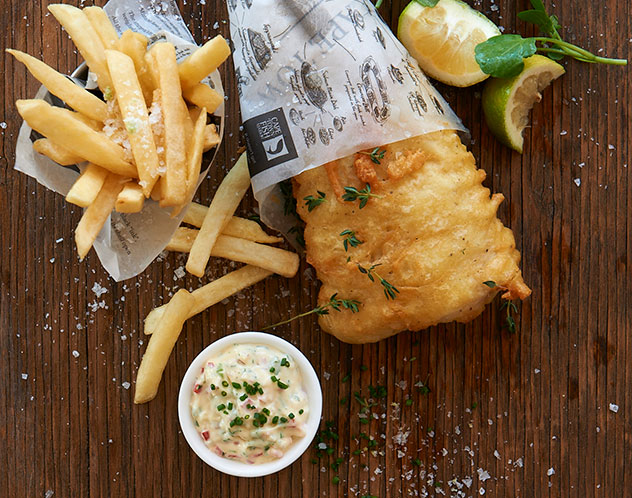 The Nando’s team has noticed South Africans are beginning to prefer customisation when it comes to their meals, hence the addition to the menu of the new pap, spinach and salad options.

Jean Sloane, group marketing executive for Ocean Basket, says that people are sharing more – and that the group is responding by offering bigger platters. “Sushi continues to grow, since younger people love sushi and South Africans have become more adventurous in their eating habits.” (Ocean Basket’s most ordered dishes are the famous fish and chips, calamari, and platters for two or more.)

At the higher end

Even in the fine-dining market, value is a concern.

“South Africans have, and always will, want to see more bang for their buck when they dine out,” says Michael Cooke of Camphors, a Top 10 restaurant in Somerset West. So even at the top end, we want the most value out of our dining experience. “Big and bold flavours seem to be what the locals are after, and we’ve seen the trend of chefs bringing the braai into the kitchen and working fire flavours into proteins, baking ingredients in ash, and wood-roasting fruits and vegetables to achieve the more pronounced flavours locals are after.
“It seems that foreigners generally appreciate a lighter approach to cooking slightly more, with cleaner flavours showcased through the use of acids, fruits, botanicals etc., and a less-is-more belief when a dish has too many varieties of ingredients on a plate.”

We are evolving, however. Michael has seen a big shift towards vegetable-driven dishes, and meat-based dishes are advancing, too. Today, a new brace of nose-to-tail restaurants is serving up a wider variety of cuts, and getting great responses. Giles Edwards of La Tête in Cape Town says that his menu, which features dishes like rolled pig face and lamb heart, has been received amazingly well by diners. “People have been excited to try ox heart and pig tails,” reports Giles, a factor he attributes in part to pre-opening publicity. He says many South Africans grew up eating offal, things like lamb smileys, skilpaadjies and tripe, so while these dishes may seem new and exotic to some, for others, eating this kind of food is simply a return to their heritage.

What are your customers’ favourite dishes? Let us know in the comments below.