Taking food to the next level 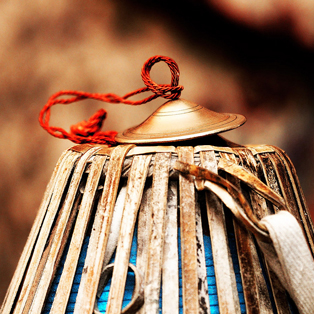 Food has always played a central role in religion. With communion, Catholics believe they are sharing the body and blood of Christ, and at Pesach Jews have constructed a culinary narrative of their exodus from Egypt.

The role that food (or the absence of it) plays in political protest was in the news recently when the Indian yoga guru Swami Ramdev embarked on (then called off) an eight-day hunger strike in protest over corruption.

Another link between food and spirituality was celebrated this week with the publication of The Cake the Buddha Ate, a fine collection of vegetarian recipes from the Buddhist Retreat Centre in Ixopo, KwaZulu-Natal.

But what kind of restaurants serving devotional food can be found in Johannesburg?

A good example is Shayona in Mayfair. The restaurant is run by followers of Swaminarayan, who (as a devotee called Vishal explained to me) was born “after Lord Krishna”. There are a number of framed posters of the man on the walls of the large dining room and he appears to be gazing down kindly on diners.

You will find no onion or garlic in the meals at Shayona but you would be hard pressed to say they were missing.

They believe that garlic and onion dilate the blood vessels, of which there is a surfeit around the genitals, which makes them “very difficult to control”, according to a Swaminarayan website.

The “de luxe lunch” is a large meal and should be ordered only by the very hungry. For R65, it includes pea and potato samoosas, a stack of paper-thin rotis, three rich curries spiced with dhania seeds (potato and brinjal, paneer and sugar bean, and served in small silver pots), rice, dhal, a papadum, an undressed chopped salad and a dessert. They will also send over a good lemon pickle if you ask for it.

On a less spiritual note there are also pizzas and pastas on the menu, but with the pizzas, at least, you would never find anything quite like them at an Italian restaurant.

One has spicy tomato sauce, mozzarella, feta, peppadews and “soya prawns”, which are little strips of soft brown textured vegetable protein. They bear no resemblance to prawns, except perhaps for their vaguely oblong shape, but are rather pleasant if you’re into that sort of thing.

The pizzas are also served with two nosebleed-inducing chilli sauces.

There is no proselytising and the staff and managers are courteous — a little distant — but perhaps their minds are on higher things.