Tuesday, May 21st, 2013 by Katharine Jacobs and Linda Scarborough 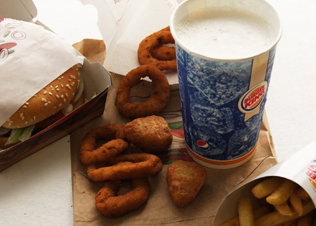 Since SA’s very first Burger King branch opened on 9 May in Cape Town, we’ve been inundated with stories of hour-long queues at all hours of the day. (We even know people who’ve waited at the doors before opening time on a Sunday morning!) So is all the hype worth it? And is the Whopper better than a Big Mac or a King Steers Burger? For those not in Cape Town – or those not prepared to wait an hour to find out – we decided to stage a burger-off. Warning: do not try this at home.

When we arrive at Burger King on Heerengracht Street just before noon, the queue is already reaching round the full length of the store outside.

“It’s like the launch of the iPhone 5!” exclaims the guy in the queue behind us.

We wait a very long time. So long, in fact, that I violate all Capetonian ethics and actually begin conversing with the people around me. They all seem to be gainfully employed, which is somewhat surprising to me. Who are these people that have an hour just to queue to buy their lunch?

“We work across the street,” explains one of the men behind me. “We’ve been watching every day to see when the queue wasn’t too bad.”

After roughly 65 minutes I emerge, triumphant. Hugging my brown bag like a warm, flavourant-laden baby, I glance back at the queue. While I’ve been inside, it’s grown the length of another shop front. One man has (apparently) even fainted, and been ushered inside to sit down. How can the burger possibly live up to such expectations?

As previously discussed, I have pretty high standards for chips.

“Ugh! Those are awful,” I say, sneaking a McDonald’s chip as we ‘style’ them for a quick snapshot. Sadly, all the chips are a little cold after being rushed back to the office, and the McDonalds ones are the worst affected, thanks to their extreme skinniness. “There’s not much inside; no creamy potatoeyness,” observes copy editor Linda. (Yes, that’s a real word. It should be, anyway.) I make an unkind comparison to clammy cardboard.

The Burger King chips, by contrast, have great creamy innards, crispy outers, and aren’t revolting, despite being a little chilly. But it’s the Steers chips that have us coming back for more. “These really taste like potato!” I exclaim. “You can see that they’re slices of an actual food,” observes Linda approvingly. No reconstituted Smash here.

Steers wins the chip round convincingly, coming in ahead of Burger King, with McDonalds trailing rather far behind.

“Is that strawberry?” Linda asks doubtfully, looking at the somewhat pale Burger King shake. We draw our straws and slurp.

“It’s surprisingly strawberry-tasting,” says editorial assistant Kelly. Sure enough, it sort of makes me think of something approaching a fruit, if you can imagine a fruit with the capacity to hold approximately a boat-load of sugar. Kelly pronounces it her favourite.

The McDonald’s milkshake is thick and cold, with a pretty soft-serve peak at the top.  The Steers one, however, gets my vote. It’s truly ‘pink’ flavoured, in that unashamed way that reminds me of childhood Nesquick shakes. “It’s converted me from my firmly anti-pink-drink stance,” agrees Linda, who had previously moaned about being made to ingest something flavoured with faux strawberry.

The Whopper
This is what we’ve been waiting for. I carefully unwrap our Whopper to admire it. This one seems to be the widest burger, if not the highest. I cut it down the centre: one layer of meat pattie, plenty of fresh tomato, lettuce and some rings of raw onion.

“There’s a big umami hit on the first bite,” notes Linda, tasting a slice. I concur: there’s some great tangy mayo and onions for texture, but I can’t taste any gherkin. “Insufficient gherkin!” I declare, opening up the burger to discover that there is indeed a green pickle, but I’ve just missed it because of the distribution system. All in all, though, it’s a solid performance: plenty of flavour, a good balance of sauce to bun ratio, and fairly meaty. On to McDonalds.

The Big Mac
It’s been a while since I’ve had a Big Mac and the combination of sweet secret sauce, gummy artificial cheese and chopped onions has me swooning. It’s a very sweet burger, which is probably a bad thing.
“I kind of love McDonalds,” I admit sheepishly. “I know. I love them too,” laments Anelde, who appears to have magically escaped her meetings for the all-important burger round.

The King Steer
This is the biggest burger in both height and topping quantity. “It’s quite mustardy,” I note, overwhelmed by this flavour in my first bite. But what stands out about this King Steer is the meat. “It’s like an actual burger,” agrees Linda, noting the natural meaty texture and hearty, authentic flavour of real mince. It has cheese, too, which is a big plus in its favour in my book.

“Perhaps it’s not fair to compare burgers with cheese to burgers without cheese,” points out Linda. “We’re comparing flagship burgers,” I counter. “How can you not have cheese on your flagship burger?” (We’re looking at you, Whopper.)

As far as price goes, the Big Mac is the cheapest of the burgers at R22.50, followed closely by Burger King’s Whopper at R23.90. The King Steer Burger is quite a bit more expensive, at R39.90.

In the end, we’re a hung jury. Anelde and I plump for the Big Mac, Linda for the Steers burger, while Kelly gives Steers, Burger King and Big Mac precisely the same scores. (Which when all is said and done, is probably a pretty accurate appraisal…)

Before it’s over, we break out the onion rings and chilli cheese bites from Burger King – two products that are not available at the other chains. The onion rings are kind of great – puffy and perfect – with just a little bit of crunch in the centre. “Delicious,” pronounces our esteemed editor, Abigail, grabbing a cold one on her way off to a shoot. As for the chilli cheese bites, they are something of a revelation: crispy batter filled with gooey, melted, very yellow cheese and spicy sliced chilli. They’re a little like a chilli popper, only with more cheese and batter.
“I would go to Burger King just for these!” pronounces Kelly. Definitely a winner.

So there you have it. Head to Mickey Ds if you like a salt-and-sugar rush, Steers if you want something a little closer to an actual burger, and Burger King if you want cheesy chilli bites, crisp and puffy onion rings, and the opportunity to make new friends in the queue.

By Katharine Jacobs and Linda Scarborough