Top trend: Why we love horseradish 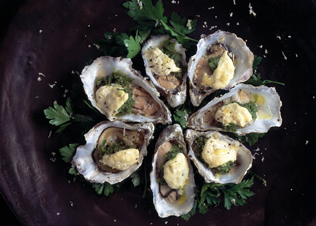 No food item tries harder not to be eaten than horseradish. First, the tasty root hides under the soil. Then, when you finally get to it, it tries to scare you away by being ugly as sin. Once you get over the initial shock and attempt to grate it, you are punished with burning eyes and a runny nose; then it spitefully turns bitter the second you turn your back. And, if you finally get horseradish onto your plate, it tarnishes your finest silver.

Why is it that a food item this stubborn is always on the shopping lists of top chefs and enthusiastic foodies? Kristia van Heerden investigates.

Horseradish is hotter than wasabi, and you don’t have to go to Japan to get it. In fact, horseradish is often used instead of wasabi due to the scarcity of the wasabi plant.

Oysters can’t get enough of it

Fresh horseradish is about twice as strong as the store-bought version, which is why Rudi Liebenberg of Planet Restaurant at The Mount Nelson likes to mix it into a frozen buttermilk mixture that he grates over oysters. Celebrity chef Reuben Riffel also enjoys his horseradish with a side of oyster – and very kindly shared his grilled oyster and horseradish recipe.

It can outlive most actual horses

Whether you’re passionate about pickles, a sucker for salads or a horseradish puritan, the root can last forever and a day. Adding a tablespoon of white vinegar and a pinch of salt to grated horseradish will extend its life in the fridge by three or four weeks, giving you a plenty of time to experiment.

Chris Erasmus from Pierneef à La Motte loves pickled horseradish. Try your hand at his horseradish and beetroot pickle. If that doesn’t sound like your cup of tea, you can wrap a whole root in cling wrap and keep in in the freezer until the cows come home. Take a microplane grater to the frozen root when needed and return it to its chilly retreat for next time. That is precisely what David Higgs  (of Five Hundred at The Saxon in Joburg) does: “We grate frozen horseradish over salads, so every now and again you get that pungent flavour coming through. It’s almost like a powder – it’s nice and fresh and clean.”

Fish love it too

Okay, fish don’t love to eat it, but we love to eat it with fish! Rudi likes to serve smoked salmon with a horseradish panna cotta cream and The Greenhouse’s Peter Tempelhoff enjoys a touch of horseradish with his yellowtail. Try Peter’s yellowtail tataki with buckwheat noodles and powdered dressing on for size.

All these years we’ve gorged ourselves on oranges to prevent colds and flu when we could have been eating horseradish. On average each 100g of horseradish contains 79.31 mg of vitamin C. Horseradish helps fight respiratory infections, tonsillitis and urinary tract infections. Infused horseradish also has known antibiotic properties. For more ideas on eating yourself healthy, read our list of food remedies for winter.

You can even drink it

“The one thing you have to do with horseradish is have it in a Bloody Mary,” says David Higgs. “I’ll never forget having a Bloody Mary first thing in the morning in New York with loads of fresh horseradish grated into it. It was unbelievable!” It’s ironic We love food with a sense of humour. Contrary to its strange name, horseradish is poisonous to horses.

Read our other trends articles on pickling, cooking with flowers and peanut butter.