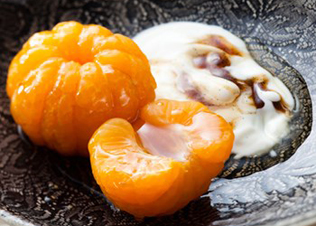 “Homemade yoghurt has more flavour than store-bought yoghurt; it’s cheaper and it’s better for you,” says chef Reuben Riffel. Around the world, people are choosing homemade or homegrown ingredients over mass-produced or commercially farmed alternatives. Homemade yoghurt is becoming increasingly popular for its fuller flavour and fewer preservatives.

“Making yoghurt is actually a very simple process,” says Gregory Czarnecki, Chef de Cuisine at The restaurant at Waterkloof. ‘’There are so many recipes, but the principle behind making yoghurt is always the same.” Here’s how to make your own.

Milk is at the heart of a good yoghurt and, according to Bevan Rees, co-owner of the Timothy and Clover online market, you can’t expect good yoghurt if you don’t invest in good milk.

“The milk from Mooberry Farms, for example, is taken from a small herd of six Jersey cows that live a lifeunknown to animals from a normal commercial dairy,” he says.

“They roam freely, graze on grass, are hand-milked twice a day and don’t receive antibiotics or growth hormones. This translates into dairy of greater flavour and higher nutritional value.”

How to make homemade yoghurt

To make yoghurt, you need active bacteria. You can either buy this in powder form or you can use pre-made yoghurt. Make sure the yoghurt is plain, contains live cultures, and is additive free (look out for pectin, gelatin, or dry milk powder on the ingredients list). Once you’ve made your first batch, you can use your own yoghurt as a starter for new batches, so remember to keep some aside.

To begin, bring the milk to 80 or 85°C. Do not boil. (If boiled it loses a lot of the nutritional qualities and flavour, warns Gregory).

From there, cool the milk to between 43 and 45°C while adding plain yogurt or powdered bacteria. You can use an ice bath (fill your sink with ice) to speed the process.

Once at 45°C, maintain that temperature throughout the whole fermentation process in order to get the best result. Thermos flasks work well here to maintain heat, but remember to heat them up first.

Allow the yoghurt to incubate for five to ten hours. The longer you leave the yoghurt, the tangier it will be. Do not stir during the incubation process. Once you’re happy with the flavour, transfer to sealable containers and refridgerate.

Recipes and ideas with yoghurt

“Most people use cream for dessert, ice cream and sorbets, but I find yogurt a bit more interesting,” says Gregory. “Last year I made a pomegranate yogurt mousse, served with beet caramel, biltong soil, buchu meringue and grilled cucumber. Yogurt is a very versatile ingredient.” Here are some alternative ways to use your yoghurt:

Labneh is a type of cheese made with strained yoghurt. It’s wonderful with warm flatbread and can be used in a variety of dishes.

“I think what I love about tzatziki so much, is that it is incredibly fragrant and flavourful but it feels healthy and light, even though I use thick as can be Greek yoghurt,” says blogger Alida Ryder. Try her recipe.

Versatile and delicious, tzatziki is can also be used as a sauce to add a bit of flavour to ordinary dishes, like this cumin and coriander sweet potato recipe.

Alida also uses yoghurt to marinade chicken or lamb. She adds either Greek or Indian spices to her yoghurt marinade. Try lamb marinated in yoghurt at Bhandaris in Fish Hoek or marinate your own chicken for this delicious Mexican chicken roll.

Rudi likes to add a bit of yoghurt to a curry right before serving. Yoghurt takes away a bit of the bite of some Indian dishes, like this do-it-yourself butter chicken bunny chow with tomato and yoghurt.

For a slightly different take on yoghurt and curry, try the home-smoked salmon at Coobs in Johannesburg. Served on curry yoghurt with coriander and litchi salsa, it’ll make you sorry you ever thought yoghurt was a breakfast food.

Yoghurt is a great ingredient in hot or cold soups. Try a cold avocado soup with cream and yoghurt, or this cold cucumber soup.

Also give Alida’s spicy lentil and coconut soup with roasted chickpeas a go.

Ramp up your dessert repertoire with these yoghurt-based desserts:

Where to buy homemade yoghurt

Rudi remembers his mom buying him a yoghurt maker as a child. “I wish I paid more attention,” he says. “I was too young to understand the fuss and the contraption ended up in the garage.”

If, like young Rudi, you want all the goodness of homemade yoghurt without all the effort of actually making it at home, he recommends the goat’s milk yoghurt by Foxenberg and buffalo milk yogurt by Rockwood.

“They make natural yoghurt and Greek-style yoghurt that has been strained twice through muslin cloth to get the extra thickness to avoid adding thickeners. The flavoured yoghurts are sweetened with raw honey. It really combines a move towards homemade produce with good food principles: respect for animal welfare and ingredients as natural as possible,” he says.