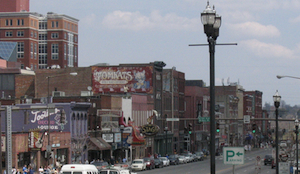 Nashville, Tennessee is not your typical foodie destination. In fact, it’s not even your typical holiday destination unless you’re an aspiring singer or want to see where Johnny Cash and Miley Cyrus took their first cowboy-boot-clad steps.

But, as I discovered on my recent trip to the “capital of country music”, there’s quite a bit to see, smell, taste and buy in this laid-back Southern city.

My discovery of the food scene in Nashville was quite haphazard. Soon after I arrived, I realised that things in the south happen at their own (i.e. slow) tempo, and that the best way to fit in and have fun is to just go with the flow – to eat and drink as you merrily meander along.

I started my amblings on Broadway, Nashville’s main tourist drag and home to a string of noisy honky tonk bars. Squeezed between stores selling guitars, boots and hats, you’ll find the odd barbeque restaurant. My first foray into Southern cuisine was at Rippy’s Smokin’ Bar & Grill, which certainly lived up to its name, serving smoking hot barbeque grills.

In true American fashion, the plate was loaded with food – delectable spare ribs, coleslaw, onion rings and fries, washed down with a Budweiser.

Twenty minutes’ walk from the market is another Nashville institution – Monell’s. If you want to experience true Southern hospitality and cooking, you can’t get better than this. The restaurant is situated in a beautiful old house filled with large oval wooden tables. You can’t make a reservation, and you can’t choose who you sit with – you simply get plonked onto the nearest available seat. The result is a family-style dining experience where conversation between strangers flows as freely as the big bowls of food. They have two sittings – brunch and dinner – and both offer a smorgasbord of typical Southern dishes. The most popular dish seems to be the skillet-fried chicken – it’s even served at brunch!

I visited Monell’s for brunch and was ambushed by bowls and platters of smoked sausage, bacon, country ham, biscuits and gravy (biscuits are a variation on our scones), hashbrowns, fried apples, pancakes, corn pudding and cheese grits (coarsely ground hulled corn, mixed with cheese, and then boiled). Greasy and cheesy and fatty, but delicious. Fighting cholesterol might well be the official sport in Nashville.

But it’s not just at Monell’s that fried food is popular. Whether it’s chicken, beef or catfish, every menu at every eating establishment is bound to serve something that’s been deep-fried. It’s as much part of this part of the world’s culture as the Southern drawl. Apart from Monell’s, there’s also Arnold’s Country Kitchen, Prince’s Hot Chicken Shack and Swett’s. All three are excellent for fried chicken and meat-and-three – another Southern staple consisting of a portion of meat and your choice of three vegetables (of which one is, oddly, often cornbread).

In search of something green and un-fried, I happened upon Marche Artisan Foods. This open, airy café is the brainchild of locavore chef extraordinaire, Margot McCormack and serves fresh, local fare that is both innovative and delicious. The menu changes regularly, but lunch might include lamb burgers, seafood paella and leek and goats’ cheese tart. Dinner brings home-made ricotta ravioli with sugar snap peas, mint and shallot butter sauce, and pan-seared Alaskan halibut with lemon risotto, asparagus and extra virgin olive oil. There’s an overwhelming selection of desserts and home-made pastries, but the best has to be the baked cheesecake with berry compote. p Nashville also has a vibrant university culture (including the well-known Vanderbilt University), which naturally leads to a buzzing and quirky bar-cum-coffee-house-cum-restaurant scene. A perfect example is Fido, an offbeat eatery that’s located in a former pet shop and forms part of Nashville’s independent Bongo Java chain of Fairtrade and organic coffee shops. They’re good for far more than just coffee – the menu is original and varied and includes anything from breakfast staples such as scrambled egg and toast, to grilled chicken breasts with butternut and bacon hashbrowns.

My final foodie outing was to Las Paletas. About 30 minutes’ drive from the CBD, this tiny shop sells gourmet Mexican ice-lollies. The shop is owned by two sisters who learned the craft in Mexico and now produce popsicles in fabulously fun flavours, such as rose, basil, strawberries and cream, avocado, chocolate and hot pepper. The trip to Las Paletas was somehow a fitting end to my Nashville excursion. The friendly taxi driver who took me there was from Senegal, and we chatted animatedly about Africa. We laughed at the Americans and their fried-food obsession, and how when he was growing up he never dreamed he’d end up in the town that made country music famous.