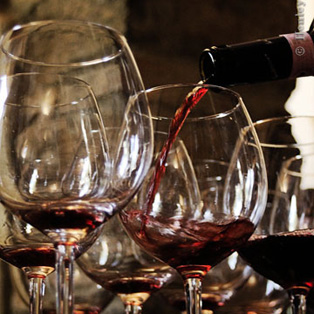 How often do you find yourself drawn to a restaurant because of great specials on the food, only to discover an exorbitant bill at the end of the evening due to pricey wine? It happens all the time. And why is it that the price of the same bottle of wine can vary dramatically depending on where you’re eating? It’s frustrating, to say the least.

A good starting point is to gain behind-the-scenes insight on how the pricing structure on wine lists actually works. Let’s start by taking the same bottle of wine – one white and one red – and comparing the price at various restaurants across the country.

A bottle of Diemersfontein Pinotage – possibly one of the most popular picks on any wine list – will cost you R175 at Café 1999 in Durban, R205 at Five Flies in Cape Town, and a whopping R295 at Wombles in Johannesburg. And this is taking into consideration that these three restaurants are on a par in terms of food prices, where you can expect to pay an average of R100 for a main course. A bottle of Buitenverwachting Blanc de Blanc (another popular choice on wine lists) will cost R110 at Wombles, but R125 at Five Flies. It doesn’t seem to make any sense.

Firstly, it helps to know that restaurants pay different amounts for the same wine depending on who they’re buying it from (wine merchant or ex-cellar), when they buy, and how much they’re buying. And with more wine available than ever before, the competition is fierce.

Secondly, understanding the formula used by restaurants when pricing their wines helps if you’re trying to find a better deal. According to the Wall Street Journal, “The standard restaurant markup is about three times the wholesale cost, or about twice the retail price. In most restaurants, the mark-up decreases as the wholesale price of the bottle increases: an inexpensive bottle might be priced three to four times its wholesale cost, while a pricey wine may be marked up only one and a half times. This so-called progressive markup helps sell more expensive wines.”

This rings true to pricing structures in South Africa, but with 200%, 300% and even 500% mark-ups, somebody’s losing out. And it’s not the restaurants. Most restaurants order only six bottles of one wine at a time; half for the sponsored fridge and half stuck out of the way in the kitchen or storeroom. And, to make matters worse, many well-known and well-rated restaurants charge wineries thousands of Rand to list their wines. In the end, the mammoth brands or corporate-owned wineries will buy up the majority of wine lists because they can afford it. (This is now illegal, although there are loopholes.) The result: handcrafted works of art from family-owned estates never make it to the table.

Respected winemaker Philip Jonker of Weltevrede makes an interesting point: “If a winery supplies a bottle of wine to the trade at R30, the winery has to make the wine, package it and deliver it to a distribution agent in Cape Town or Johannesburg,” he says. “Of that R30 – taking into consideration the cost to produce and deliver the wine – the winery gets less than R3 as gross margin to run his business. The distributor or agent delivers it to the trade at, say, R40.

“The restaurant buys it and puts it on the wine list for R100. Dinner is served, a bottle is opened and, at the end of the evening, the wine appears on the bill together with the food. The waiter gets a 10% tip; in other words, for the wine alone, the waiter pockets R10.

“What this means is that for an entire year of creativity, effort and risk to produce a wine and get the bottle to the agent, the winery receives R3; for delivery within one week, the distributor or agent gets R10; to serve the wine, the restaurant takes R60; and the waiter, for a friendly smile, gets R10. That’s R7 more than the winemaker,” Jonker concludes.

A factor to consider is that more expensive, top-end restaurants would naturally have higher wine prices, as they carry the costs of a sommelier, pricey stemware and, very often, a wine cellar with expensive cooling systems. But are they buying large quantities of exceptional vintages to mature in temperature- and humidity-controlled cellars for years until they are perfect to serve? Hardly, but for a few precious exceptions.

Where does this leave diners? At the end of the day, it seems the more expensive wines are a better deal due to less mark-up – but it depends on how many people you’re dining with. And if it’s real value you’re looking for, try not to order wines by the glass: typically, the first glass of wine sold by the restaurant pays for the cost of the bottle should the rest not sell and need to be thrown out.

Perhaps the solution (unrealistic, unless you live in the Cape) is to buy directly from the wineries and pay corkage. And perhaps the same goes for restaurants. If chefs and proprietors were to form relationships with winemakers, and select and buy their own wine directly from wineries – therefore cutting out the middleman – this would mean they could charge less mark-up and keep their customers coming back for more.

Posticino in Sea Point, Cape Town, is a good example of a restaurant that keeps its wine mark-ups to a bare minimum. They sell stacks of wine and the restaurant is packed every day. Their philosophy: they charge only a standard fee on the cost of a bottle of wine, so the selection of great wines makes it attractive to diners. Their informed customers (smart phones can reveal the wine’s retail price right there) know for sure they’re not being ripped off. “We want people to come back for the food,” says employee Amy Kropman. “We’ve been in the game for a long time and this is a recipe that works.”