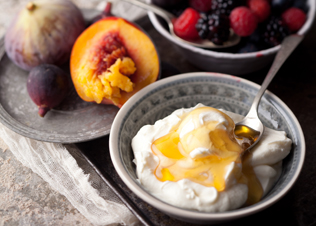 “At 21 my mother married a charming Greek gentleman and was whisked off to Athens, where she learnt the use of strained yoghurt and soft feta in simple yet delicious recipes,” Filia Dimitriades wrote on Gourmet Greek’s entry form after being nominated for an Eat Out DStv Food Network Produce Award earlier this year.

On retiring to the KZN midlands, Filia’s parents, Rosemary and Dimitri, decided to bring these flavours of Greece to South Africa. But the reality of cheese making is much less romantic than it sounds, we discover.

Gourmet Greek is still in its infancy – the cheesery was built in July 2012 and the first products were sold in October 2012 – and it really is hands on.

“We still have a long way to go,” says Filia. “At the moment, it’s just my parents, myself, and two more staff.”

Dimitri gets up to light the fire at 4.30am, as their ‘donkey’ needs to start heating the vats to pasteurise the milk. After the fires are lit, he gets in a bakkie to fetch the milk from a dairy farm about 15 kms down the road. The little team does everything, from heavy lifting and turning moulds to cutting curds, labelling, marketing and even deliveries. (A luxurious van with a refrigerated cab is still a dream at this stage, I am told with a chuckle.)

I ask then if the family has plans to expand the outfit. Not too much, says Filia. “We want the cheesery to keep that ‘Midlands quality’.”

Eat Out fans will know what she means – there are so many top quality producers in that part of the country. Previous produce awards winners from KZN include Dargle Ducks and Croft Chickens, Piggly Wiggly farm stall, Swissland Cheese and Enaleni Farm, which won this year’s Heritage Award.

“The [Midlands] Meander is so rich,” Filia agrees. “People do the most incredible things on their small farms.” To attract more visitors to the area, Gourmet Greek has just this week erected a sign to their farm (on the D369 between the award-winning Piggly Wiggly stall and the highway), so traffic is sure to improve. And Filia says that the exhausting work becomes so much more rewarding when customers show their appreciation.

“I get such a sense of pride when I see people enjoying the products. That makes it all worth it.”

The milk from down the road is one of the secrets to this rich, luscious, all-natural yoghurt. Jersey milk is used because of its high butter fat content, guaranteeing a higher yield. Filia’s taste for the creamiest dairy was formed when she was really young. “I didn’t know anything else… I just remember growing up on rich feta and spinach pies and such creamy cheese. You basically didn’t even have to dress the salad because the flavour of the feta was enough. In Greece a lot of recipes for which we’d use cream in South Africa are actually made with yoghurt. A healthy, thick yoghurt cuts down on the fat and the price.”

Dimitri and Rosemary still have a house in a Greek village, complete with stone footpaths and old ladies who take the goats into the mountains everyday. This community has really learned how to work with their produce, says Filia. “You wouldn’t think they could make their food without a Spar around the corner!”

At the moment Gourmet Greek sells their award-winning yoghurt as well as cheddar, gouda, feta, halloumi, pecorino and brie. I ask if there are any plans to branch out into non-dairy products. “We are thinking of opening up a meander shop,” reveals Filia. “In addition to our cheese and yoghurt we might have baklava and things like that; a few Greek dishes, maybe. So it would be like a small coffee shop. But that comes with time and staff!”

The yoghurt is pudding in a bucket, according to the produce awards judges. It will also make glorious tzatziki – just add grated and drained cucumber, chopped garlic, lemon juice and chopped fresh coriander. Filia enjoys it simply with some homemade lemon curd mixed in. “Or maybe with meringue and strawberries, and a sprinkle of sugar on top. I tasted this combination once, but it didn’t last very long!”

Buy directly from the farm in Lions River, KwaZulu-Natal, and at various delis and shops on the Midlands Meander. Gourmet Greek also supplies selected Spar stores around KwaZulu-Natal and in Pretoria.