Woodstock’s The NOB is big on burgers and rockabilly cool 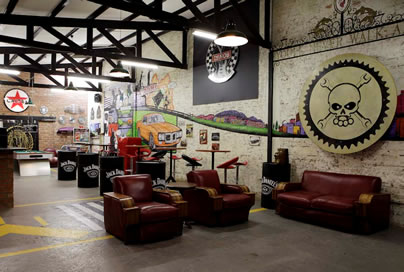 In years to come, we’ll look back on the noughties and the twenty-teens (is there a name for our decade yet?) as a time when we ate an extraordinary amount of burgers. Whether it was the recession that gave rise to new ways of dressing up the humble patty, or the influence of fast food on our menus, one thing’s for sure: never have there been so many gourmet burgers to sample.

Cape Town’s most recent offering, The NOB – an acronym for ‘no ordinary burger’ – opened up in Woodstock in October last year, courtesy of husband-and-wife team Zezia and John Fourie.

“Being from up-country originally, we understand meat very well and have been spoilt with ample choice and availability of the best red meat. But finding a good burger here was near impossible,” explains Zezia.

All the patties are 100% meat (i.e. no breadcrumbs or fillers) and are made to order by their local butcher. The sesame seed burger buns (Zezia insists there’s a different between normal buns and hamburger buns) contain real butter and are made freshly every day by an artisan baker. There are no sides or desserts on offer, only burgers. It’s a little like the also-irreverently named The Dog’s Bollocks. So how do they measure up?

If there were a competition for size, I’m fairly confident The NOB’s burgers would take home the honours for Cape Town. At 16cm in diameter, they are enclosed in paper and the key to successfully scoffing them, apparently, is to slowly move the wrapping down with each bite so that you don’t lose any of the filling.

The burgers come in seven relatively classic flavours. There’s the basic Original Captain with barbecue sauce; the Cheese with cheddar and mozzarella; the Porker with bacon; the Porra with a delicious, insanely garlicky Portuguese prego sauce (the pay-off line is ‘how much garlic can you handle?’); a Peppery Mushroom burger; and the Chilli Cheese, which comes with large rings of jalapeño and a spicy kick.

The patties are good and meaty and the rolls are perfectly fresh and delicious from the toasting they receive on the grill. There’s also a mushroom burger – not listed on the menu – available for vegetarians.

A small selection of craft beers, SAB products and a couple of spirit mixers is available. There’s also a house red and white wine available for R80 a bottle, both from boutique wineries in the Wellington area, and Steri Stumpies for those who prefer to pair their burgers with milky drinks. 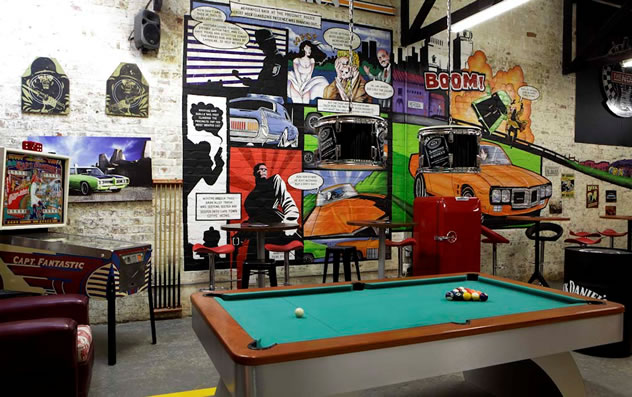 A partnership with Detroit Motor Spirit  means that the space is imbued with a Rockabilly vibe. American muscle cars, Harley Davidson memorabilia, large, brightly coloured murals and original pinball and Packman machines (free to play and also for sale) create a space reminiscent of a scene in Grease. (Which is pretty appropriate: Danny’s gang was named The Burger Palace Boys after all!) The three tables are pushed together to form one long table, adding to the relaxed, friendly atmosphere. The space is also available for hire and would make a great spot for a birthday party. Contact zeziaw@gmail.com for bookings.

It’s a three-person show – manageress Victoria Hoffman makes up the trio along with the Fourie siblings – so service is no-frills, but usually not too shabby. Place your burger and drinks orders at the counter.

If you’re of an ambitious nature, try the Mega NOB, consisting of a double patty, double cheese and double topping, served in a hubcap. It’s available in any of the regular flavours for R110 and reputedly weighs around 700g.

Given the garage vibe and propensity to serve only burgers, The NOB does invite comparison with The Dog’s Bollocks in the city bowl. But as to where it ranks, our group of six is a hung jury. Personally, I would say that The Dog’s Bollocks wins out because of their innovative toppings and tastier patties, but The NOB’s rolls seem fresher and burgers bigger. And perhaps there’s something to be said for classic rather than complex burgers, after all.

What do you think of The NOB? Who makes the best burger in Cape Town? Tell us in the comments.