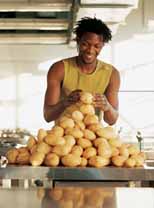 This year’s winner of the first Woolworths TASTE bursary award, announced at the Eat Out Johnnie Walker Restaurant Awards for 2006 held a few weeks ago, is Mkhanyisela Kapa, or MK as he’s affectionately known.

MyLife is an aspirational organisation which aims to create future leaders through a process of emotional regeneration, skills development and job creation.

The MyLife project has helped turn MK’s life around, allowing him to pursue his passion for food.

After living on the streets of Cape Town, MK had brief jobs in restaurant kitchens and then, thanks to the MyLife project, he did an apprenticeship under Jamie Oliver as part of Oliver’s Fifteen Foundation.

And now, MK will be attending chef school in 2007 thanks to this bursary award from Woolworths Taste. It is MK’s dream to own his own bakery one day and we are sure this dream will soon be realised.

Mk offers a real message of hope to marginalised young people and, as part of the Mylife project, he is helping to nurture resourceful, responsible leaders, well-equipped to tackle the realities and challenges of the future.