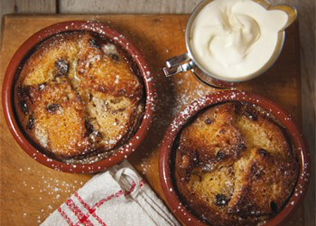 Bacon desserts are one thing – fancy a hazelnut bacon cupcake, bacon milkshake or maple bacon doughnut? – but we’re still a little old-school in the pudding department. We’re so faithful to the cause that we’ve already compiled the ultimate list of chocolate fondants, as well as a checklist of all the places to eat malva pudding.

When it comes to dessert, we want it hot, we want it sweet, and we want it to warm both the belly and the heart. And sometimes, the best after-dinner indulgences are the ones you’ve made in ouma’s baking dish, using hand-me-down mixing bowls, family pouring jugs and wooden spoons with history.

Here are 12 hot pudding recipes to feed your soul this winter.

Almond and apple pie
Sarie’s food editor, Herman Lensing, is madly in love with the French. He ate this particular apple pie for the first time on holiday in Paris, and – as he did with everything else in the city – he fell head over heels in love. This is his simple Afri-French version of it, which has gorgeous, layered golden apples and a cheat’s crust of puff pastry. (We won’t tell.)

Bread and butter pudding
This nostalgic classic was given the ‘Italian-deli-just-around-the-corner’ treatment by Marlene van der Westhuizen, who adapted it by adding cinnamon, vanilla paste and orange zest.

Carrot soufflé
The winner of MasterChef USA is known for incredible desserts, and this moreish carrot soufflé is no exception. “My sister Brittyn will not eat carrots unless they are in the form of this carrot soufflé, or what I like to call ‘vegetable candy’”, says Whitney Miller. Smart kid.

Chocolate lime fondant
“There are a lot of fondant puddings around – which is a good thing – but I wanted mine to be slightly different,” says celebrity chef Valentine Warner of this irresistible recipe. “I was thinking about my favourite sweets as a child, which were the lime éclairs, those green ones with the little chocolate centre.” You might have to taste this recipe with a spoon at various stages (though not while baking, obviously) to be sure of the chocolatey flavour. Let it never be said that you’re not dedicated.

Lemon soufflé
Scared of soufflés? This recipe shows that the light and fluffy French dessert is more manageable than it seems – although you do need to follow all the steps carefully and serve it immediately after it’s come out of the oven. No problem there.

Malva pudding
Minca Worsley’s recipe for her ouma Corrie’s malva pudding won our competition for family recipes a few years ago. Says Monica, “This was my paternal grandmother’s recipe for the South African classic and my mom recorded it when I was about seven years old. It’s the only one I go by.” We can see why: the recipe calls for apricot jam, lots of cream, evaporated milk and truly South African Cape Velvet Liqueur.

Pear and honey tart
With layers of baked egg custard, sweet pear purée and crispy pastry, this is one dreamy tart – a little like its creator, British dessert king James Martin. Pears are in season right now, so be sure of selecting the sweetest and most tender fruit.

Quince cobbler
The food editor of WEG! and GO!, Aletta Lintvelt adores the gentle perfumed flavour of quinces filling the kitchen, and is frequently looking for excuses to cook with them. This pudding is the perfect balance between fragrant fruit and a not-too sweet crumb.

Spicy baked apples
A healthy but delicious winter dessert, this recipe is courtesy of YOU Let’s Cook Step by Step, by Carmen Niehaus. The apples are stuffed with spices, raisins and nuts, and emerge from the oven covered in sticky sauce. This is a wheat-free option that still delivers on the comfort factor.

Sticky toffee pudding
British chef James Martin – renowned for his butter and cream baking – does not disappoint with this traditional English favourite. Word has it that sticky toffee pudding was invented by the first owners of the historic Sharrow Bay hotel many years ago. James has taken the original recipe and given it his trademark twist with a decadently rich toffee sauce.

Do you have a soft spot for the old days? Read about 25 of South Africa’s most nostalgic foods and the magical rise of peanut butter.