The Grill Jichana restaurant in Durban promises more than what one might expect from a restaurant in a chain hotel. Here’s why this steakhouse deserves its nomination for the 2014 Boschendal Style Award at the Eat Out Mercedes-Benz Restaurant Awards.

In just over a year, The Grill Jichana has developed a reputation as one of the best steakhouses in the country. It may be one of 11 restaurants in the Tsogo Sun’s Southern Sun Elangeni and Maharani hotel complex, situated on Durban’s Golden Mile, but is managed as an independent entity and even has a separate entrance. 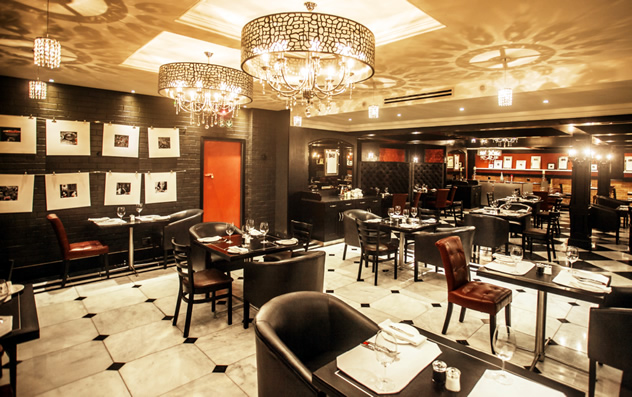 The Grill Jichana. Photo courtesy of the restaurant.

Executive chef Shaun Munro has designed a steakhouse menu that prioritises salads over starters, placing the emphasis on the star of the show: perfectly grilled meat, fish and chicken infused with the aromatic flavours of the African East Coast spice route – cassia, cloves, cinnamon, cardamom, turmeric and pepper. The banters have come out in droves, although we’re sure they can’t always resist the temptation of Shaun’s signature supersized “bafana” potato chip inspired by Heston Blumenthal.

As with the food, the design takes inspiration from Africa – but not a hokey crafty tourist’s vision of Africa. Instead it’s an Africa of worldly elegance and classic opulence. A black and white colour scheme is livened up with a rust red spot colour on the walls and some of the chairs. Leather tub seats, elaborately framed prints and ritzy chandeliers add personality.