8 reasons why fish and chips is the ultimate comfort food

Brought to you by Cape Town Fish Market

Peanut butter and jam; spaghetti and meatballs; fish and chips… There are some combos so sacred that to separate them would be blasphemous. It’s not that additions are a problem – we’re open to vegetables or a side salad joining the fish-and-chips team, or even wedging this duo into a roll. It’s just the separation anxiety that bothers us. That’s why spotting this classic on a menu soothes and reminds us that it’s always there for us to fall back on.

While the low-carb revolution would have us believe that potatoes are to be avoided at all costs, us comfort eaters know they’re a diet staple. Slightly crisp on the outside and perfectly soft on the inside, chips are uniquely equipped to soothe all ailments of the soul.

If you’ve ever tried fish and chips leftovers the next day, you will have learnt your lesson. While deep-fried potatoes are our hero, they unfortunately don’t perform too well when cold. The flip side? When the crunchy, golden batter gives way to piping hot, succulent fish, and crisp chips break open to reveal steaming, creamy potato. Not only does the heat mean your meal is fresh, it also means that the batter is going to be perfectly crisp and the chips in prime condition.

4. Your hands get greasy

Let’s be honest: There’s nothing comforting about a cold knife and fork. True comfort food must be eaten with the hands – chips from the packet, burgers, pizza; we could go on – and must leave behind some sort of residue as a happy memory. A parcel or plate of fish and chips ticks those boxes spectacularly, particularly if there are sauces or vinegar involved.

5. It doesn’t need anything fancy

Yes, tartar sauce is fantastic, but it’s more of a pleasant addition than a necessity. The only accompaniment really needed for fish and chips, if anything at all, is a splash of vinegar or a spurt of lemon juice. This bright acidity complements the delicious fattiness of the fish and cuts through the richness.

We’re not saying there’s anything wrong with naked fish. Or, for that matter, seafood cured with citrus, cooked en papillote or marinated. All we’re saying is, none of those methods provide a result quite as satisfying as that crunch when you bite into your battered fillet. In fact, most people judge their fish and chips based precisely on the quality of the casing. Is it a beer batter? Is it well seasoned and made with herbs and spices? Does it create a beautiful shell or is it a mite soggy?

No matter where you’re having your current portion of fish and chips, you’re instantly transported to the first or best time you had it. You could be in a restaurant or on the couch at home – either way, you’re reminded of that day at the fishery on the corner, or the time your family gathered on the beach in the beating sun, fending off envious seagulls.

8. It lifts the spirits

It is believed that fish and chips actually provided an edge to the British soldiers in the First World War. The theory goes that, because the Brits were so satisfyingly well fed and the German soldiers were not, it gave them an advantage to win the war. If fish and chips provided a morale boost to those whose very lives were at risk, there are few blues this special dish can’t combat. 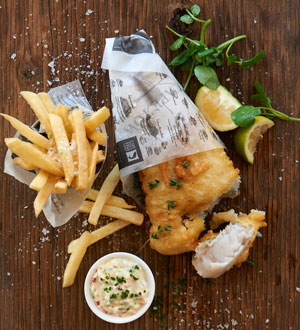 The first Cape Town Fish Market opened its doors almost 20 years ago, when restaurateur Douw Krugmann purchased a fresh fish store at the V&A Waterfront in Cape Town. Today, CTFM is proud to have 12 locations across South Africa, as well as one in Tanzania.

It is a restaurant built on fresh ingredients, a relaxing atmosphere, and, most of all, great-tasting seafood and sushi.