The accidental foodie: Good Italian at The Cousins in central Cape Town 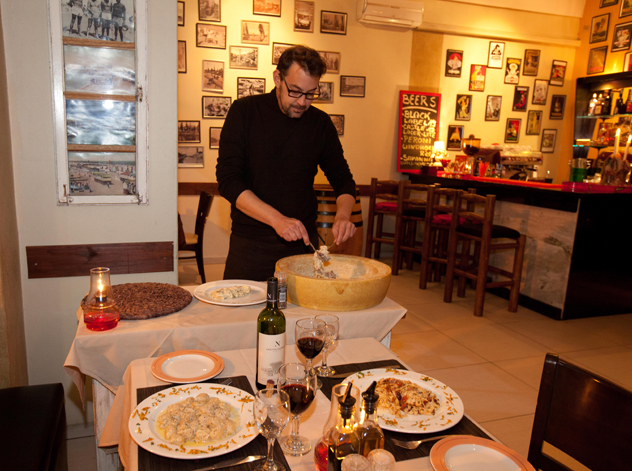 Wheel of parmesan at The Cousins. Photo supplied.

Sometimes it’s good to be adventurous in the city. Like taking an Englishman to an Afrikaans show or to visit a restaurant on the “wrong” side of town, discovers Eat Out columnist Irna van Zyl.

Barrack Street in Cape Town houses Mavericks on the one end, The Cape Town Regional Home Affairs Office and Cape Union Mart’s head office in the middle, and The Cousins at the other end. Not the most famous of streets in the city centre for finding good, trendy or fine food.

Yet we can almost not get in the door of the little Italian trattoria that was started three years ago by two Italian cousins who were joined in the past year by a third.

I had tried to get a booking by phoning that afternoon for an early dinner in time to make the 8.15pm show of Afrikaans star Nataniël at the Artscape. Eventually, after three unanswered calls, we decide to risk it because we’d heard so many good things about the eatery.

On this particular Wednesday night, Barrack Street, a one-way, is closed at the entrance, the end where the restaurant is. To get parking close by is a bit of a challenge as we make our way up and down empty one-ways but eventually, with the help of Google Maps, we find a spot. 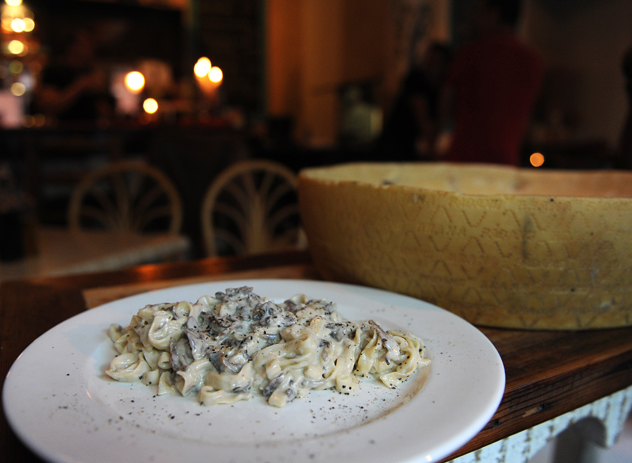 Fresh pasta and parmesan at The Cousins. Photo supplied.

It transpires that there’s an unannounced building operation happening after-hours next door to The Cousins, with massive concrete mixers coming and going one after the other on their doorstep.

But there is a reward for those who persevere: On entering, we discover that The Cousins is a little haven in this awkward street. A little piece of Italy, complete with TV on the wall and sepia pictures to help create atmosphere. All it needs is an Italian flag.

Surprisingly enough, once inside the restaurant we are bothered less by the noise than we thought we would be. And there are already three occupied tables so early in the evening.

“My cousin likes to sleep in the afternoon,” says the attractive Italian who welcomes us when I complain about the lack of phone response. He points us to a lovely table for two by the window. The last available one, it seems.

Service is prompt. So prompt that Cousin Number Three, Luca, can’t even get to us in time to explain the menu before the waitron does. We order from the specials on the board: tagliatelle with mushrooms (I think it might be porcini, but then porcini featured later on in Nataniël’s show and I might be confused. Being an accidental foodie, I obviously can’t tell the difference. But then B, the Englishman, confirms it is indeed porcini). B orders her favourite tagliatelle bolognese. “Excellent choice!” exclaims Cousin Three, explaining that his family comes from the Romagna region, and the capital is Bologna.

Our plates arrive with parmesan and parsley royally distributed. I add some black pepper. The pasta is made freshly every morning and it shows. I have also not tasted mushrooms like this before, and B’s bolognese is superb. I take a bite and concur – simply delicious. We also splash out on a bottle of Tokara Shiraz (R204) and are not disappointed.

Next time I’ll make sure I know which mushroom we’re talking about. And we’ll certainly find our way back to the east city. Often. With our wine, the bill comes to a modest R460, including the tip. When we leave just before eight the restaurant is vibey and full.

A last note about the concert: “Nataniël is excellent,” says B. “What an amazing voice. Somewhere between Robbie Williams and Elton John. An Afrikaans Eddie Izzard. A brave man.” As I said: a little adventure almost always pays off.