The Accidental Foodie: Noma in Copenhagen, the experience of a lifetime

There are only two sittings a day, with room for 45 guests and a private room for 20, so no more than 110 visitors a day. And it’s almost impossible to get a booking.

The original Noma has been named the world’s number one restaurant in 2010, 2011, 2012 and 2014 in The World’s 50 Best Restaurants before it’s closure for a move to new premises. he day before our dinner, Noma 2.0, as it is widely known, with its new location with an entirely new concept and ownership structure, achieved second best status in the world at The World’s 50 Best Restaurant awards 2019. 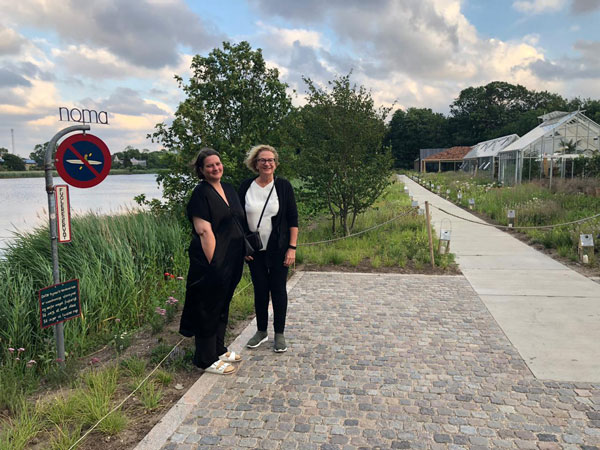 Securing a booking at Noma isn’t easy. Hannerie has tried many times before, but this year she got lucky. She was waitlisted and her computer was open in front of her when the e-mail with the good news dropped. You have to pay immediately the full amount upfront (of about R5 000 per person) in order to secure your booking. And then you have to get yourself a Visa and a flight to Copenhagen as quickly as possible.

I arrived on the first day of Noma’s vegetable season. This means 18 courses of only vegetables. Our booking was for Wednesday, the late sitting that starts at 9pm.

The restaurant is on the outskirts of Copenhagen, about 15 minutes by taxi from the city centre. You’re greeted here and pointed inside to a hothouse, where you’re served a small local beer and can make yourself at home on wooden benches whilst meeting your fellow diners. We were six at a shared table – two Danes, one American married to an Australian and the two of us, the only South Africans in the restaurant.

The building is light and airy, with big windows looking out onto the herb gardens outside. The kitchen is in an open space adjacent to the dining area, from where you can intermittently hear shouts of “yes!” when a certain dish is ready.

The dishes come out in quick succession:

1. The butterfly
We’ve seen the butterfly from last year’s vegetable season, but it still blew our minds with its beauty. It’s made of nasturtium flowers marinated in pollen and arranged as a butterfly on an extremely thin piece of flat bread.

It arrives at the table in a little glass box, reminiscent of butterfly collections, and it is delicate to eat. You pick it up with your hands, taking note of the waitron’s instructions to be careful. It melts in your mouth and blows your mind, and then, just like that, we’re off.

2. Barbecued pepper
A small green pepper, to be picked up by the stem (“Don’t eat the stem,” is the warning) filled with fava beans and more peppers. Very delicious. 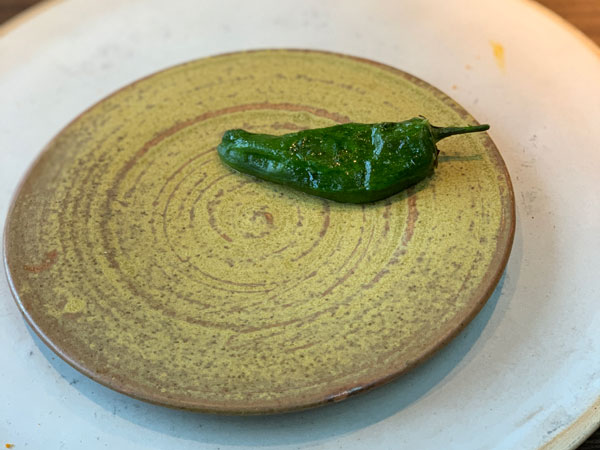 The barbecued pepper at Noma. Photo by Hannerie Visser.

3. Candied beets
This pretty beetroot is wrapped in a little parcel of food leather, made of berries and presented on a stone. Flavour explodes in your mouth and we’re fascinated by the food leather innovation. 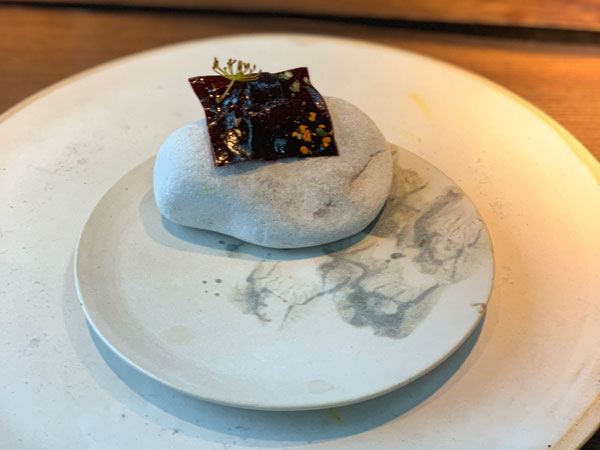 The candied beets at Noma. Photo by Hannerie Visser.

4. Chilled onion bouillon
It’s the first time a piece of food utensil appears. It’s a small spoon with which you can eat the onion bouillon, with its nuts and fresh cream. The novelty of this dish is that it arrives as a whole onion, from which you take the lid off in order to discover the small broth inside the onion.

We enter the molded food phase of the night with three special dishes.
One of the highlights of the evening is a barley pancake on which they grew mold through the restaurant’s extensive fermentation programme. It’s layered inside with black winter truffles and Danish goat’s milk cheese. 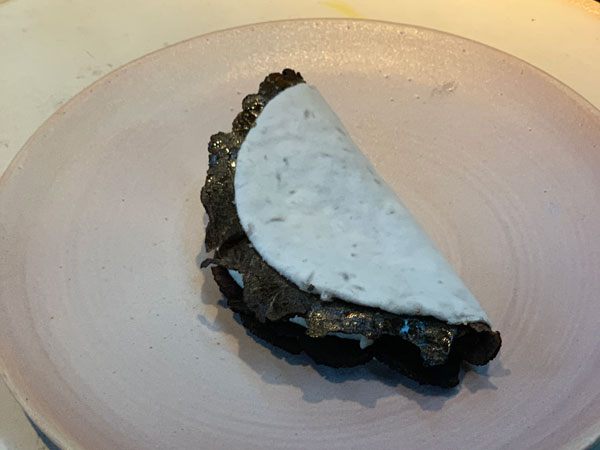 Molded pancake with truffle at Noma. Photo by Hannerie Visser.

It’s an unbelievable experience in taste and tactility. Hannerie found this to be one of the most mind-blowing dishes of the night.

6. Green asparagus preserved in mold
Served with small wild flowers and herbs from the garden and a sauce of roasted yeast and pumpkin seeds. 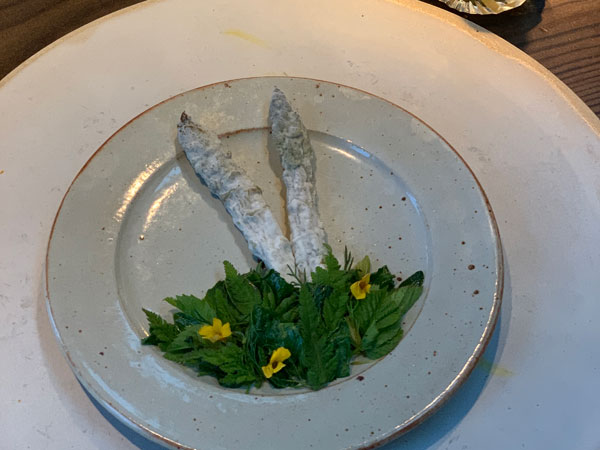 7. Mold pie
Molded egg yolk in a smoked seaweed tart. It’s very pretty and reminded me of a little jam tart from my youth. 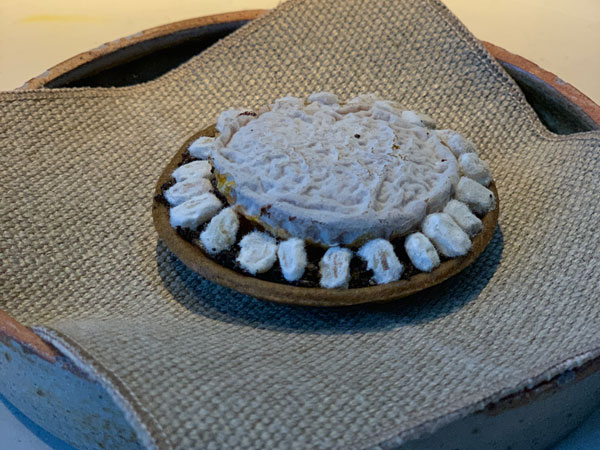 8. Berry soup
One of my best dishes of the night. (Maybe because I love tomatoes so much.) It’s a dish with baby tomatoes, fresh blueberries and raspberries, with a slight chilli bite. It’s utterly delicious. 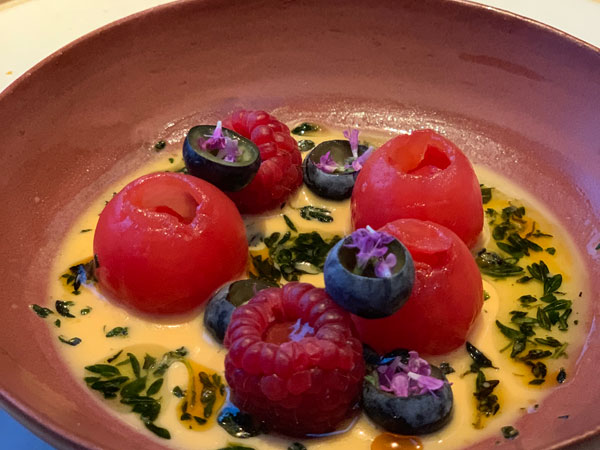 The berry soup at Noma. Photo by Hannerie Visser.

9. Flatbread with vegetables
Mainly root vegetables, some cooked and some not, presented with fried nettles and spices. Yummy. 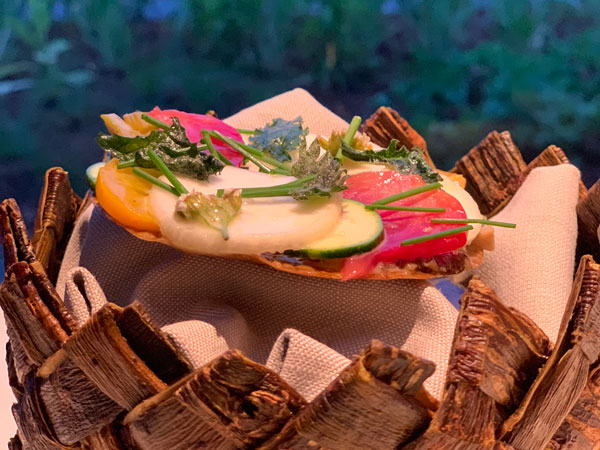 Flatbread with vegetables at Noma. Photo by Hannerie Visser.

10. Celeriac cannelloni
The chefs created a pasta imitation by cooking the celeriac ribbons in seaweed broth, drying it for two days and brushing it with egg yolk. It’s served with oyster leaves and whipped cream. 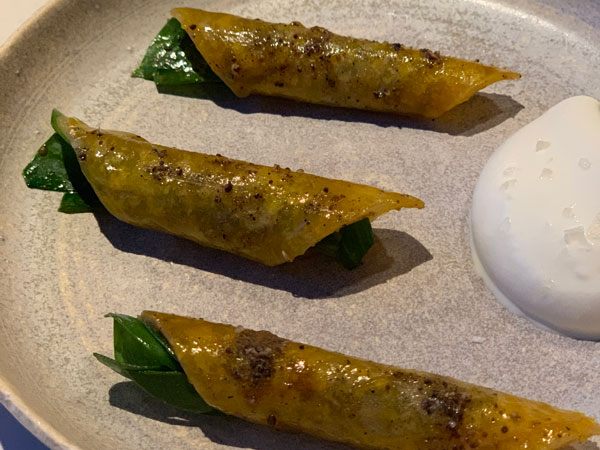 11. Boiled new potatoes
This course looks like a terracotta pot plant with nasturtium leaves in dark brown soil, but it’s actually boiled potatoes under a bed of mushroom dust. 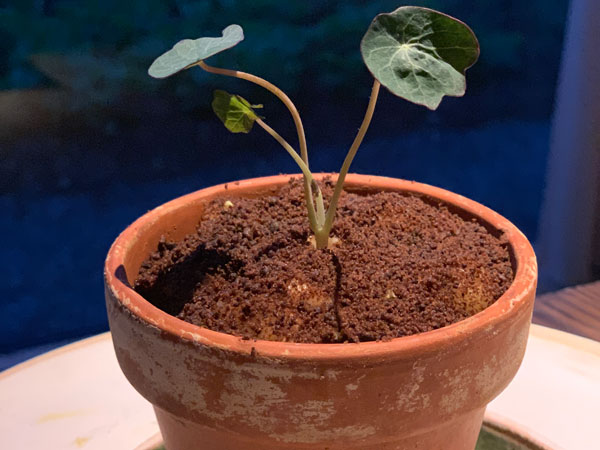 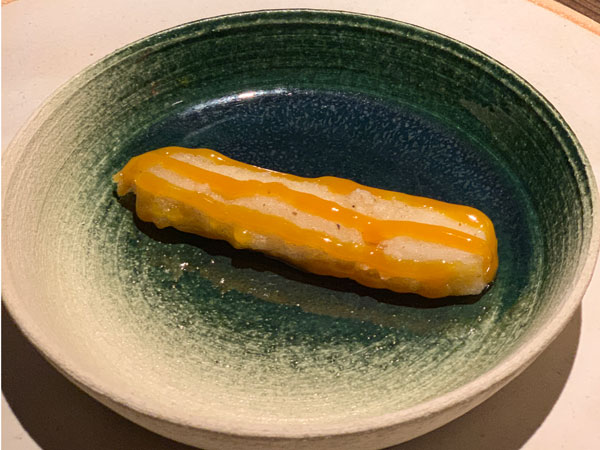 13. Quail egg in salted ramson leaves
Ramson has a garlicky taste, which really complements the egg. The Danes informed us that ramson growing wild in the fields normally signals the start of spring. 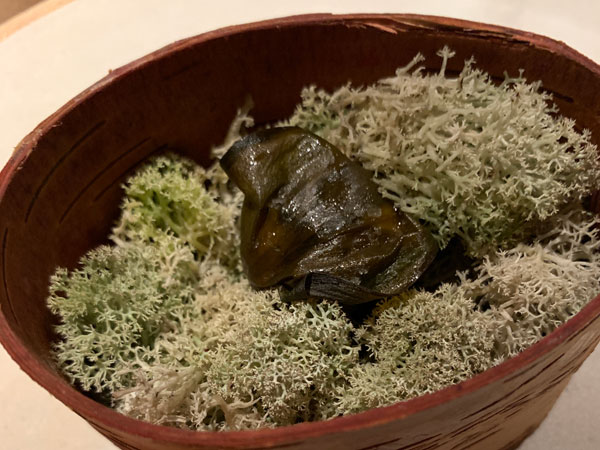 14. Wild mushrooms barbecued with pine
This looks and smells exactly like a real meat skewer, right up until you take the first bite, making for a lovely surprise. 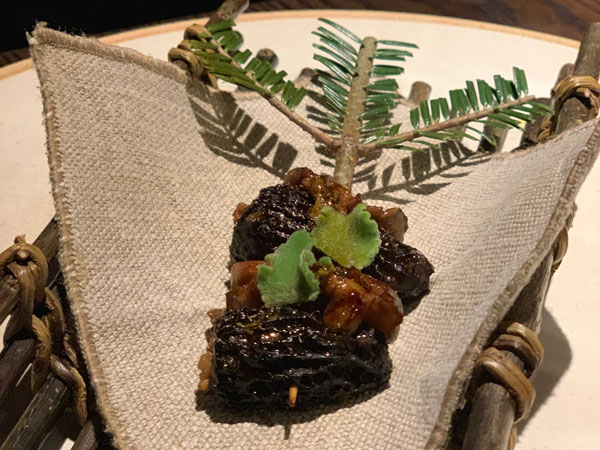 15. Vegetable ragout
This is a very pretty plate, with a combination of raw and cooked vegetables, and a summer salad. It’s a vegetable-lover’s dream. 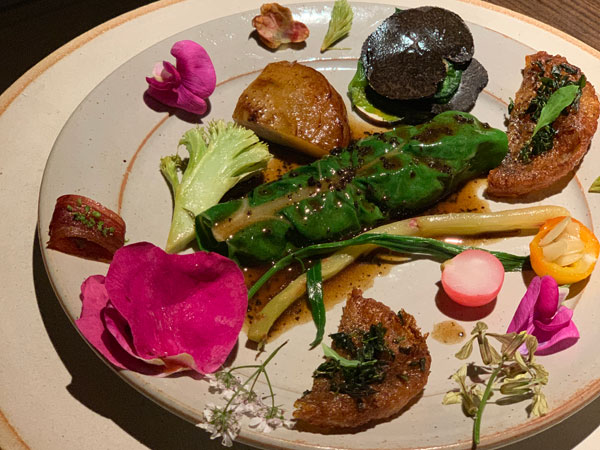 16. Woodruff and birch kombucha
The highlight of this dish was the miniature cooked pine cones that can be seen on the edge of the dish. 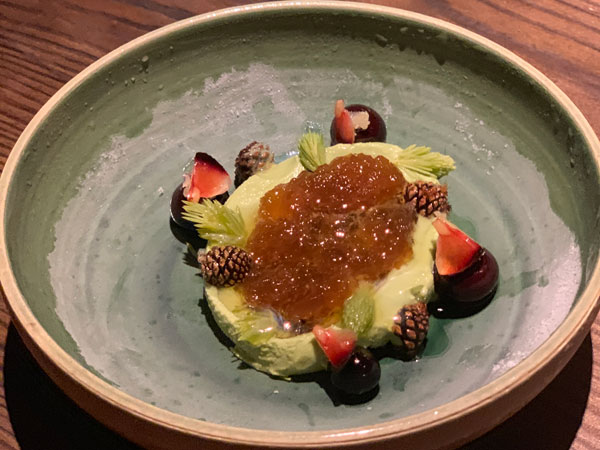 Woodruff and birch kombucha at Noma. Photo by Hannerie Visser.

17. Crispy bees cooked with chocolate
René Redzepi, the head chef of Noma, loves cooking with insects (apparently there were even ants in some of our dishes, although we didn’t know it at the time!). Last year in the vegetable season there was a dish with a grasshopper, and this year it’s bee larvae cooked with a thin layer of caramelised white chocolate. It was absolutely delicious! 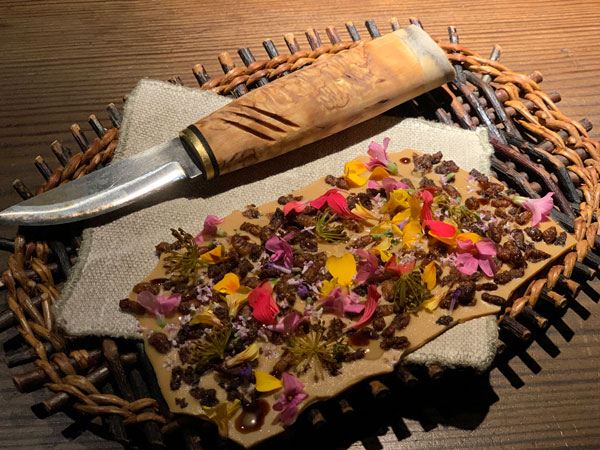 18. Fresh berries
Our last dish of the night is served with chocolate and is to be shared by two people. Amongst other things, it comprises small wild and very tasty strawberries freshly foraged earlier in the day. 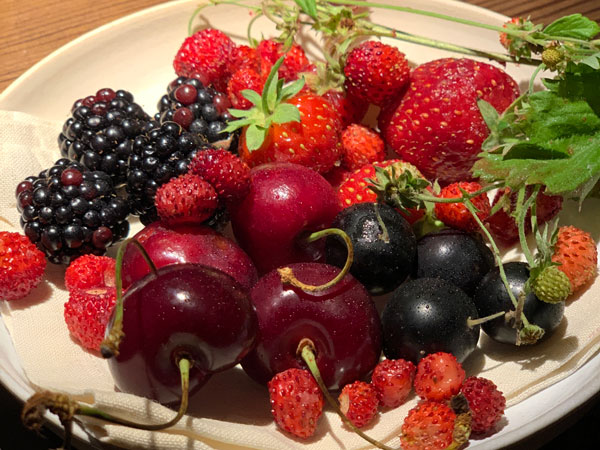 We ended the meal with hot tea infused with spearmint from Cornwall and peppermint from Malawi.

Like all good things, our meal at Noma had to come to an end after over three hours of non-stop eating and drinking. As we walked out, we were taken on a tour of the restaurant and kitchen. Then it was time to go home, sadly, but with an experience worth every cent.

The things that stood out the next morning – besides the wonderful creativity in the presentation and flavours – was the simplicity, the fact that most of the food was eaten with your hands, and the unpretentious friendly service in such a pretty setting.