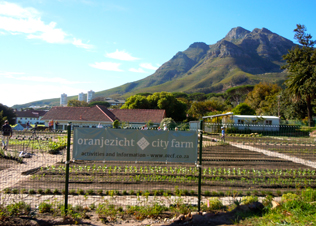 On Tuesday mornings, the women who run the community garden adjacent to the Fezeka municipality building in Gugulethu send their produce to the Harvest of Hope packing shed in nearby Philippi. There, the spring onions, turnips, spinach, and bright pink rhubarb grown by Mama Phillipina and her colleagues are packed into vegetable boxes destined for the nearly four hundred people who subscribe to the weekly Harvest of Hope scheme.

The contaminated meat scandal, where traces of goat, water buffalo and donkey meat were found in processed meat products, has made many of us realise how ignorant we are of the links that make up our food chain. Shortening that chain – understanding the journey our food takes from farm to plate – seems like the best way of eating food that is healthy, safe, and ethically produced. This interest in local, organic produce has boosted the range of community gardens and small farms based in and around cities. And, at Harvest of Hope, it has translated into growing demand for organic vegetable boxes. At the Oranjezicht City Farm on the slopes of Table Mountain, volunteers flock to lay paths, dig over beds and plant seedlings.

Veg in the city
In fact, Capetonians are in the unique position that a significant proportion of their vegetables are actually grown within the city. About a twenty-minute drive from the city centre, the farms in the Philippi Horticultural Area on the Cape Flats provide Cape Town with about half of its vegetables. It is estimated that there are at least 300 community gardens in Khayelitsha, Nyanga, Langa, and Gugulethu alone.

A number of these farmers are turning, increasingly, to organic farming methods – using fewer pesticides and chemical fertilisers, and relying on compost, mulches, pest-repelling plants and crop rotation. This is better for the environment, frees farmers from relying on big agricultural businesses, and, it would seem, produces excellent yields of top quality fruit and vegetables.

Growth of urban farming
One of the best-established urban farming organisations is Abalimi Bezekhaya. Founded in 1982, Abalimi provides support, in the form of subsidised compost and seedlings, as well as training and marketing, to around 2 500 individuals and between 55 and 100 community gardens every year, based mainly in Khayelitsha, Nyanga, and surrounds. These gardens are tended overwhelmingly by women, most of whom are pensioners. The vegetables they grow go to their families and are sold to the community.

Between twenty and thirty of these gardens are now so successful that they are growing enough to sell their surplus produce to Harvest of Hope, which Abalami established in 2008. Demand for its organic vegetable boxes is rapidly outstripping supply.

Abalimi’s success lies not only in its prosperous, productive, and independent farmers, but also in the way that it fosters strong, cohesive communities.

Community garden
Oranjezicht City Farm (OZCF) in one of Cape Town’s leafy suburbs has a very similar set of aims. Sheryl Ozinsky, one of the founders of OZCF, hopes that it will become the ‘heart’ of the local community. Located in Homestead Park, on the site of a former bowling green, OZCF encourages locals to make use of an otherwise neglected open space in the suburb, and also to get to know each other by volunteering in the garden.

OZCF employs a couple of assistants from the NGO Straatwerk, but relies on community support for planting, tending, and harvesting its produce. Although still in its early phases – the garden was established at the end of 2012 – it’s already drawing people keen to help out, and particularly on Saturday mornings. As Ozinsky observes, she ‘sees the best in people through the project.’

Cheap as (veggie) chips
Community gardens and urban farms foster strong communities, and, importantly, they ensure that we all have access to well priced, good quality fresh fruit and vegetables.

Abalimi’s Rob Small describes Cape Town as a ‘farm with a city in it’. But this farm is under threat. Last year, the City of Cape Town approved plans to build houses on a large area of the Philippi horticultural area. This poses a threat to local farmers, and means that all Capetonians – whether wealthy or poor – will have to pay more for their fresh produce. If we want to ensure that our city remains food secure, small farmers and particularly those in Philippi need our support.