Behind the scenes with the 2012 chef of the year, Margot Janse 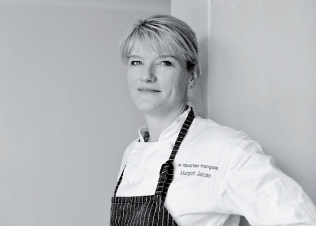 “Roer it, babes!” comes the instruction from the head chef. We’re in the kitchen at The Tasting Room at Le Quartier Français, number two restaurant in South Africa, and the subject is a young man in chef’s whites, who’s steadily whisking a vinaigrette.

In the midst of a remarkably ordered dinner service, there’s no swearing, flinging of saucepans or frantic activity. This is mostly due to respect – shown by everybody, to everybody – and the calm command of the captain, the conductor, the chef of the year, Margot Janse.

The other reason is that this is a brand-new, cool, gleaming set-up, precisely designed to specifications. The many improvements include the removal of an old, cranky, wood-burning oven, the installation of induction ovens to replace gas for a ‘cleaner’ heat, more stations, quieter fans and cutting-edge equipment.

When I arrive to have a behind-the-scenes look earlier in the afternoon, the team is quietly prepping for dinner and Margot finds me spare whites so that I can help (read: get in the way) in the kitchen. A navy striped apron finishes off the look, once Margot spins me round to wind the ties around my middle. I almost pull it off, but my impractical shoes give me away. Rookie mistake. (Later on, as I am tap-tap-tapping down some stairs into the office, Eleanor, who skilfully manages the LQF front of house, looks up from her work to say, “I knew I didn’t recognise those footsteps!”)

There’s no chance that, gadding about the kitchen, I could really be mistaken for a chef. Everyone in Margot’s team – from the chefs to the waiters – is eminently professional and focused.

I ask Alex, who’s in charge of larder, if he ever gets bored, while he methodically lays out wild flower blossoms, freshly trimmed leaves and other carefully constructed elements. He insists, “You can always do it better. You can always be faster,” with a challenging glint in his eye. No-one rests on his or her laurels in Margot’s kitchen.

The members of the team keep one another in check. Margot explains, “It’s not school; I don’t tell them when to be here. They all have a job to do.” Apparently, there’s a race of sorts every morning – nobody wants to be last through the doors.

Apart from Margot’s handpicked permanent staff, a few students have come to assist and learn. The culinary schools know by now which youngsters to send to The Tasting Room: “Only those who are smart, who get it. Who want it,” Margot confirms.

Vanie Padayachee, a LQF stalwart who’s worked with Margot for many years on and off, now runs the cooking classes on offer and manages many facets of the kitchen’s day-to-day functions. She also handles orders for the gorgeous new bar kitchen, which produces ‘bar bites’ based on a tapas concept similar to that of the erstwhile The Common Room: adventurous fare such as wildebeest doughnuts and gruyere oreos. I corner her after she and Margot spend a few minutes examining joints of vivid Karoo meat in the walk-in fridge. What’s it like working with Margot? “Well,” she says simply, “I’ve come back. It’s like coming home”.

Margot has the utmost confidence in her team: while they get on with things, she proudly shows eager dinner guests around the kitchen – she says it’s important for the team to share in the guests’ enthusiasm and interact with them – and spends a generous amount of time with me, explaining the methods, techniques and ingredients of each dish.

At one point during service, head chef glances down at a tray holding three Jerusalem artichoke wedges. She looks at the chef who prepared them, hard.

“Did you make extra on purpose?”

Margot positions them in a bowl, pours in a very special luminous-hued soup (a thorny ingredient is hand-picked at great personal cost), adds a few flourishes and places it in my hands. This is one of ten “extra” dishes made just for me, on top of those for the almost fully booked restaurant, in the course of the evening. I like to imagine it’s because the team enjoyed watching me hop, gasp and giggle through each one, but I know it’s really due to their generosity and fierce pride in their art.

Bringing new dishes to the eight-course menu is a tricky balance. “There’s got to be a flow, and I don’t repeat ingredients. With every new idea, it’s a case of ‘fiddle, think, taste’, and then taking things away,” says Margot.

“Sometimes there will be just three elements, and I’ll love it. I don’t want to eat anything else. None of ‘a dot of this’ and ‘a splash of that’…. That’s bull#$%^.”

Having said that, Margot is very supportive of her staff’s efforts at experimenting. Pastry chef Christine tells me, “She’s very understanding, and she lets me play around a lot.” The words compassionate, teach and freedom are mentioned. “She sends you in the right direction, encouraging you to be innovative and discover new things.”

Aside from Margot’s numerous awards (including eight inclusions to San Pellegrino’s World’s 50 Best Restaurants), her food is evidence enough of this creative spirit. A delicate poached quail egg dusted in pea powder tells a story, as does a mussel accompanied by sea sand and the spirit of a beach fire, and a slick black rock. Shavings of Dalewood Huguenot are intricately ruffled like chanterelle mushrooms; and don’t be alarmed if you’re served a toadstool, a tin can, or a collapsing kingdom of coconut.

Because it’s a surprise menu, every dinner guest’s dietary requirements have to be declared when they make a reservation, which means that nightly the team is conjuring up desserts with no sugar or gluten, replacements for oysters, or removing any trace of visible onion. Eleanor leads a pre-dinner meeting every evening, where it’s discussed who’s who on the guest list, whether they’ve visited before, whether they’d like to meet Margot, and countless other special requests. I notice that every single one is handled with care and consideration – yes, even mister invisible onion.

This sense of challenge-meets-compassion is a common thread. Margot has just run the Cape Town Marathon to raise funds for the Kusasa Project; her team cooks for hundreds of Franschhoek’s school children five days a week; and annually she embarks on fund-raising missions to Holland to raise millions for these feeding schemes. (Contact concierge@lqf.co.za if you’d like to get involved.)

Anyone who attended the Eat Out Conference in November 2012 will remember Margot’s power to transport an audience. In a quiet corner of The Tasting Room, thoughtfully making my way through plates of incredible tastes and textures, I am taken to the seaside, to my childhood, to the future, and then brought back to where I am, in the kitchen of one of the world’s top chefs.

“Roer it, babes!” pretty much sums up Margot Janse. Demanding, but encouraging; fun and funny; and embracing of all of Africa’s cultures and contradictions. The chef of the year, indeed.

Margot is the 2012 holder of The Eat Out S. Pellegrino Chef of the Year Award. The 2013 winner will be announced on 10 November at The Eat Out DStv Food Network Restaurant Awards.