Chef Bertus Basson is never one to rest on his laurels. His current restaurants include Bertus Basson at Spice Route, Spek & Bone, The Deck at Hidden Valley, and Overture, which has just been nominated for the Eat Out Mercedes-Benz Restaurant Awards. Now, in partnership with wife Mareli, Bertus has announced plans to open De Vrije Burger, a new spot on Plein Street in the heart of Stellenbosch. As with The Deck, which serves just two dishes (fish and chips and a burger) De Vrije Burger will serve an extremely pared-down menu. On offer: one kind of burger only. 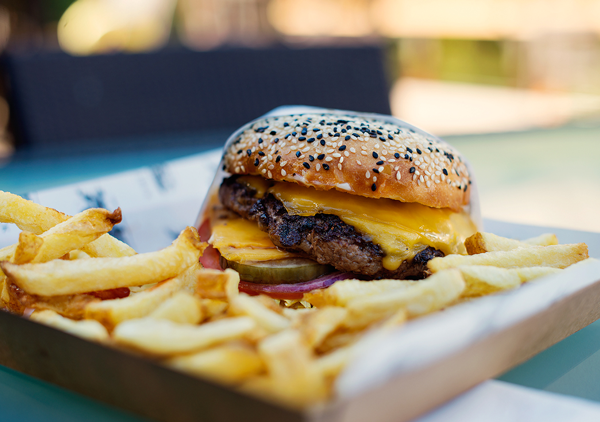 The burger served at another of Bertus’s restaurants, The Deck at Hidden Valley. Photo by Claire Gunn.

Called De Vrije Burger, the sole dish will feature butter buns encasing 100% free-range beef topped with double cheese, Bertus Basson pickles and all the trimmings. Also on offer will be two add-ons: a salad and chips. The best part? Each burger will come with a free soft serve ice cream. Bertus says he has always wanted to open a restaurant that offers soft serve. (Which is lucky because, now that we think about it, we always wanted him to, as well!)

“We are very excited that De Vrije Burger will give some of our current team a chance to grow into new positions,” adds the chef.

As for the name, the Dutch translates to ‘the free citizen’ and is also a reference to the philosophy behind the restaurant. “It’s a reference to my own freedom with food and that I believe the South African food culture is so diverse, eclectic and accepting,” says Bertus. “Our burgers are also free from bullshit.” The team will use only 100% free-range beef, hand-made buns and fresh, hand-cut fries made from potatoes from Moutonshoek farm.

De Vrije Burger is scheduled to open in early December and will trade Mondays to Saturdays from 11am to 9pm.