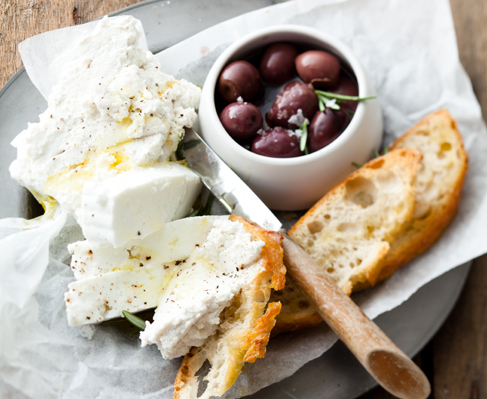 The little water buffalo’s tongue is purple and raspy as she licks my fingers. Just one week old and already the height of a great dane, this is no ordinary calf. I’m at Buffalo Ridge, and my new fan is a Mediterranean Riverine Water Buffalo. I’m here to meet the man – and the heifers – behind Buffalo Ridge mozzarella, feta, Rockwood, and range of buffalo milk products which took home the Eat In DStv Food Network Produce Award for cheese this year.

Situated at the end of a bumpy dirt track 11km outside Wellington, with two pigs, a herd of water buffalo and two enthusiastic Labradors named Leia and Padme, this place is a far cry from Wayne Rademeyer’s previous workplace.

Just eight years ago Wayne was working as an advocate in Joburg. It was at his local restaurant that the seed of an idea started: he noticed that the restaurant did not always have Caprese salad on their menu. The problem? A lack of a consistent supply of buffalo mozzarella from Europe. Wayne began investigating online. “There was less and less law, and more and more water buffalos,” admits Wayne.

Eventually, Wayne quit “the evil world of law” and gave his idea a go. Getting his buffalo into the country was no easy feat. Dangers of TB, foot and mouth, and mad cow disease – especially to the game farm industry, whose buffalo fetch a small fortune – meant he couldn’t bring them in from Italy. Eventually he found his match: a herd from Australia.

As for the mozzarella, “We had to learn ourselves,” says Wayne. He attended the World Water Buffalo Congress in 2007 in Italy and travelled around, learning from local cheese-makers, until he was able to reverse engineer the product back home.

In the modern barn, Wayne shows me how it all works. Two heifers are milked at a time – they yield significantly less than cows – and the milk is gravity-fed into the creamery. It’s here that the curds are transformed into mozzarella by local cheese-maker Richard Moso, using the ‘pasta filata’ process.

Boiling water is added to the curds and then, while hot and sticky, the dough is folded over and over on itself to remove the excess water. (This is what creates the beautiful fibrous texture.) From there, the dough is fed into a stainless steel mould with spherical holes that create uniform 120g balls, which are then left to relax and soak in brine. Altogether, it’s an eight-hour process.

How should you eat this mozarella? As quickly as possible, recommends Wayne. “Cutting mozzarella is a crime”, he adds; the proper way is to tear it. He recommends eating it simply in a Caprese salad (try adding it to this panzanella salad) or tearing it and serving it atop a pizza.

Wayne also makes old-fashioned Greek feta, which had our judges in raptures, a fromage blanc (like crème fraîche), a hard cheese called Rockwood (close to a pecorino), yoghurt and paneer to order. As for clients, Wayne supplies to most of the top restaurants in the Western Cape. Jordan, Le Quartier Français, The Greenhouse, Pierneef à La Motte, Aubergine, Bread and Wine, The Roundhouse, De Grendel, Casparus… the list goes on.

And the future? Wayne says he’s considering opening a tasting room on the farm. “When we started out, we stayed off the radar, but now that we’re more sorted out, we could really take advantage of the wine route tourism here”.

Judging by the herd of toddlers running around on their wobbly legs in the nursery, Buffalo Ridge is growing. “You have to keep your ethos while it grows,” insists Wayne, which means sticking to biodynamic methods and traditional cheese making, and steering clear of all preservatives and the like.

His environmentally friendly methods mean that fish eagles, blue crane, otters and badgers continue to make the farm their home, although the meerkats seem to have decided they’re not fans of the new neighbours. The farm is also a refuge for chef PJ Vadas’s two beloved pigs who were exiled here after they got too big for The Roundhouse’s, grounds. (I meet Porchetta in the barn, and am thrilled to hold one of her snuffling week-old piglets.)

Before I leave, there’s just time to meet one of Wayne’s three bulls, the vast and impressive Don Juan. Wayne tells me that he has to smooth down the tips of the horns, as the bulls tussle and can injure one another. When he sees Wayne, the 1.5 tonne bull swaggers over to the fence and lowers his head. “They like to be scratched behind the ears,” Wayne explains, as the huge animal leans in. Yep, it’s pretty clear why this herd produces award-winning cheeses.

Want to try it for yourself? Head to Wellness Warehouse, Raith Gourmet, or the Neighbourgoods Market.

See the story in pictures: visit our Facebook page.