Fabio Daniel, head chef at the award-winning Rust en Vrede, has a rich cultural heritage. While he was born in Brazil and grew up in the countryside of Sao Paulo, in a town called Limeira, his family immigrated to Brazil from Italy. This background means that eating, drinking and socialising have always been a part of his makeup.

“Both my parents have five siblings each. All the uncles and aunts live in Limeira, so I grew up in the classic enormous Italian family where everyone is involved in each other’s lives for better or worse,” he explains.

In 2010, Fabio and his wife decided that the Western Cape was where they wanted to settle. “I asked David Higgs if I could help him in the kitchen for free, and he asked me to start the following day.” Now Fabio runs the kitchen in one of the top-rated restaurants in the country. Rust en Vrede will be reopening its doors at the beginning of October. “The team and I have used the winter months to come up with a brand-new menu and we are very excited to get back to fine-dining!” Fabio says.

While guests can expect a fine-dining six-course menu when Rust en Vrede’s doors reopen, we wanted to know from Chef Fabio, what are the Brazilian dishes from his childhood that resonate the most with him. Here’s what he had to say.

This is a typical Brazilian food made with shredded chicken covered in dough and then moulded into a teardrop shape. It is then battered and deep-fried. We would eat coxinha every Friday evening with the extended family at my auntie’s house. When I was young, we would go to my auntie’s house every Friday for dinner. All the women in the family would be gathered together in the kitchen, rolling and shaping the coxinha. And while their hands were busy shaping, their mouths were busy talking. And it was crazy! Everyone talking together, getting louder to make themselves heard, gossiping about all the events of the week. It would always be all the women and me because I was in the kitchen trying to get something to eat ahead of when the food was ready. 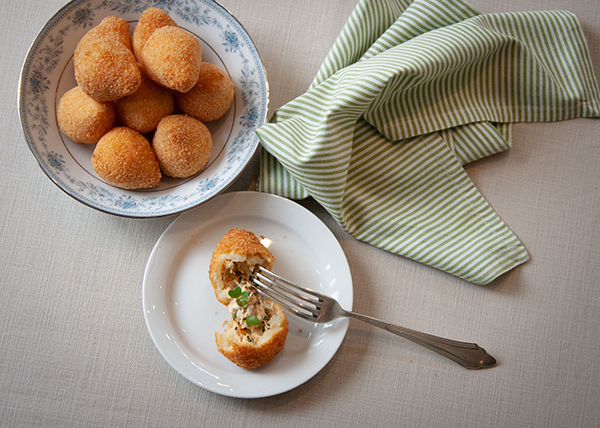 This is toasted cassava flour. Brazilians prepare it as a side dish, with many additional ingredients. Farofa usually accompanies grilled meat cooked on an open fire. Farofa is always served at the churrasco because it captures all those delicious juices from the meat. Farofa always reminds me of my uncle Le. He is the best braai master I know (in Brazil we call the braai master the churrasceiro). My uncle Le would spend all day minding the meat on the fire and there was always a fresh plate of farofa by his side. When the hot meat came off the fire, we could dip it straight into the farofa for the best flavour! When I get nostalgic for Brazilian food, I organise a full-on churrasco with my Brazilian friend who lives in Hermanus. We prepare all the typically Brazilian trimmings like farofa, picanha, and the special garlic bread recipe from my uncle. Then we show our South African friends how a real braai is done!

This is a sweet treat! It is toffee caramel rolled into bonbons, coated in chocolate sprinkles in a mini-cupcake lining. Brigadeiro takes me back to all my birthday parties as a child. Every party my sister and I had, we would have brigadeiro. It is very sweet, and the texture is so wonderful! Perfect for children like me – I had a terrible sweet tooth and would get hyperactive when I ate a lot of sugar. I was a nightmare for my poor mother. But I just loved the brigadeiro. Even as a grownup, I will still have it for my birthday! 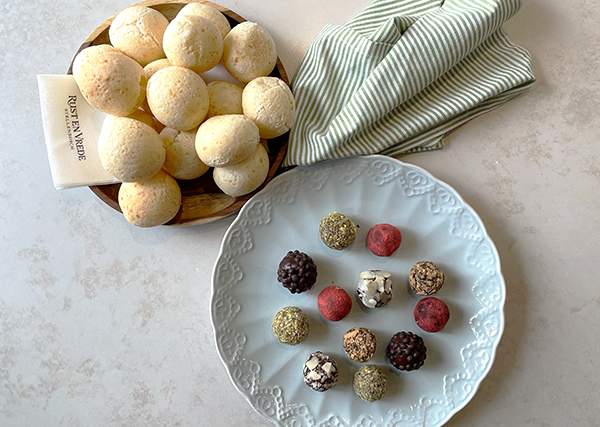 This Brazilian cheese bread is a small bread roll, made from tapioca flour and parmesan cheese. It has a crispy crust with gooey cheese in the centre. I have a very special memory of pão de queijo. After five years of travelling around the world, I had an idea that I wanted to arrive back home on foot, via public transport. My wife and I had been doing an extensive leg through South America. We caught a bus from Argentina through Uruguay then Brazil, which eventually dropped us in a city one hour from my hometown. We then took a local bus, which dropped us about a block away from home. It was 6am. We walked home with our backpacks, to be greeted by my mum in her pyjamas, with a fresh pot of coffee and a tray of hot pão de queijo. A homecoming to remember.