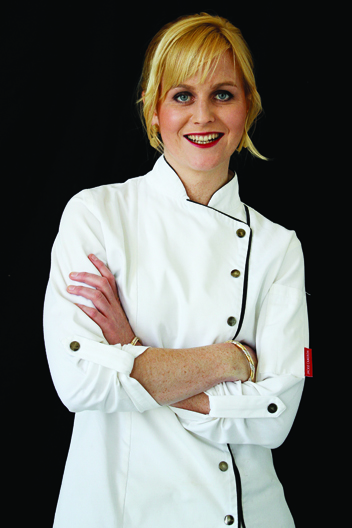 Jackie Cameron, head chef at Top 10 restaurant Hartford House, has announced that she will be leaving the restaurant at the end of July to start her own culinary school. Jackie Cameron’s School of Food and Wine will open its doors in Hilton in the KwaZulu-Natal Midlands in January 2015.

Jackie has been at the hotel since 2002 and the Hartford House restaurant has, under her guidance, won numerous awards, including a spot in the Eat Out Top 10 no less than four times. With her input, Hartford House won the 2013 Inspirational Award in the Top 100 SA Short List Wine List as well as a Diamond Award for its 2012 and 2013 wine list, as recognised by Diner’s Club International. The talented chef is a Chaîne des Rôtisseurs member, has appeared on TV programmes such as MasterChef SA, Top Billing and The Ultimate Braai Master, and is on the KwaZulu-Natal committee for the South Africa Chefs’ Association.

Jackie told Eat Out, “I always knew after Hartford I wanted something of my very own. As I have grown, so we as a team have grown together. It has been truly a special process. But I have been brought up to believe that one only truly succeeds in life when one has one’s own place. It’s time for me to have mine.

“Hartford House has been an incredible training ground for me, and there I have had the opportunity to achieve many goals. For this I am most grateful to Mick and Cheryl Goss, who took on a real fledgling and gave her wings.”

The decision has been many years in the making, so she’s had more than enough time to get her head around it. However, it hasn’t been easy. “Hartford itself, Hartford’s staff, the team are my family … But at last I am in a position to realise my dream.”

Says Eat Out editor Abigail Donnelly: “It’s astonishing to see a chef grow. Jackie has continued to surprise me every year, and I’m so proud of the way she always asks how she can do better and takes the time to care. While it’s very sad to see her leave Hartford, I’m excited to see her on her own, giving back to the industry. I’m also looking forward to giving Hartford its space for a year and to seeing who and what Mr and Mrs Goss invest in. I know it will be the very best.”

According to Jackie, it was very important to her that the Hartford House team was left intact, and she worked very hard to ensure the team was up to standard before she even thought about resigning. Asked if she won’t miss the hustle and bustle of the restaurant kitchen, she says, “I will always be a chef; this is in my blood. I could never see myself out of the kitchen. But my school will allow me to reach many goals within this industry. I love everything about food: from creating, to cooking, to writing, to designing, to cake-icing, to front-of-house, to photography and yes, even the paper work/ business side is enthralling for me… What better way to do this all than with keen students?”

The new chef at Hartford is one of Jackie’s protégés, Travis Finch, who has worked in Europe and under Peter Tempelhoff at The Greenhouse. Travis is joined by another Greenhouse graduate, Brendan Ryan, who has most recently worked at Singita Game Reserve in KwaZulu-Natal.

“All the awards we have achieved at Hartford is truly special but seeing the development in another human being is what is key for me,” Jackie revealed. She’s very appreciative of everyone who has supported and encouraged her over the years. “And now it’s time for me to go it alone. I look forward to seeing you at my new school in Hilton. Do come and visit in the new year!”

Interested in restaurant openings and closures across SA? Read our story with all the hot news.