Is this the country’s most Instagrammable coffee? A Melrose Arch café is serving macchiatos in ice-cream cones

Exciting news: we may just have found the most instagrammable cup of coffee Jozi has to offer. Since it opened in Melrose Arch a month ago, The Grind Coffee Company has been causing something of a stir – partly because of some seriously good coffee, and partly because of its signature drink, a macchiato served inside an ice-cream cone cup.

The cones were developed in conjunction with Simone Mann of World’s Best Brittle, and are now custom made by chef Jill Okkers using a special recipe, and are then coated inside with a series of different dark-chocolate compounds to prevent them from leaking. “It took us a while to figure that out,” admits creator Dayne Levinrad. “At first we had people spilling – I had to replace quite a few. But we’ve now found a recipe that works.”

The cone is then filled with your choice of an espresso or macchiato. As it is, it’s not a beverage with an infinite shelf life. “Once we pour it, you’ve got about three minutes to drink it,” warns Dayne. (We recommend enlisting the help of a friend if you intend on Instagramming the experience!) 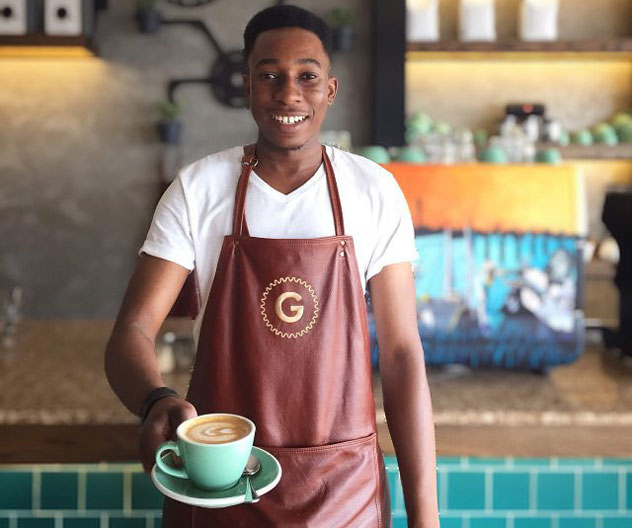 One of The Grind baristas, Alfred. Photo courtesy of the cafe.

Coffee expert Dayne had the idea while watching one of Heston Blumenthal’s crazy experiments on The Food Channel. Heston was pairing chocolate from different regions with chilli, which inspired Dayne to try his own chocolate and coffee pairing. He’s also done a chilli-infused coffee, using Jamaican scorpion chillies.

As for the coffee used – it’s got some great credentials. The seasonal house blend, a three-bean Arabica mix (from South America and North Africa), is roasted quite gently to extract better floral notes. Dayne has consulted all over the world with his coffee expertise, and most recently spent four years in Australia at cutting-edge coffee shop Pablo & Rusty’s in Sydney.

How has the reception been? “We opened a month ago only and we’ve been so busy, we can’t keep up with demand. Poor Jill has been slaving away in the kitchen to keep us in ice cream cones,” says Dayne.

Yours for R40 at The Grind Coffee Company in Melrose Arch.