Will there be a wine drought?

Although Day Zero has now been pushed out to 9 July 2018, the South African wine industry has reached a challenging stage in the harvest season due to the continuing drought and devastatingly low water supplies in the Western Cape.

What will happen to your favourite bottle of chenin or shiraz? While some might find this trivial in the grander scheme of things, the truth is that the wine industry and the Western Cape’s agriculture industry in its entirety is facing some huge challenges. 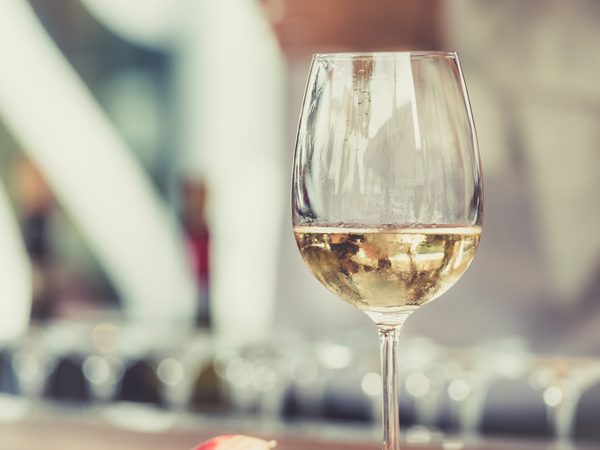 What will happen to your favourite bottle of chenin or shiraz? Image by Thomas Martinsen via UnSplash.

At present many wine farms are facing the smallest crop in 12 years. “The 2018 wine grape crop is expected to be the smallest since 2005,” says Francois Viljoen of VinPro, a non-profit company that represents 3 500 South African wine producers, cellars and industry stakeholders. That’s due to several reasons, says Francois: a decline in vineyard area, an ongoing drought, and crop losses due to frost and hail.

While many consumers may only have been affected this year, the drought is actually in its third consecutive season. As a result, most wine producers are depending on irrigation water from various schemes that have been rationed since 2017’s growing season. “This available water is simply not enough to meet the needs of the vineyards at this stage,” says Francois. “Vineyards are now beginning to show symptoms of water shortage and declining berry growth. Smaller berries mean a lighter harvest with lower juice levels, which contributes to lower volumes,” he adds. 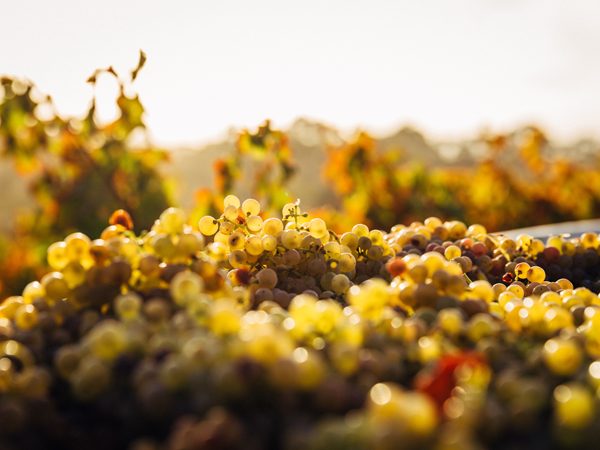 Image by Thomas Schaefer via Unsplash.

Duncan Savage, winemaker of Savage Wines, has seen a notable decline in crops this harvest. “I didn’t even harvest one of my old dry-land vineyards in the Skurfberg, there were just no grapes! The farmers are in trouble, the crops were low in 2016 and this year it’s ridiculous. Some areas are going to see some of the old vines dying, which really sucks,” shares Duncan.

Spier in Stellenbosch is seeing a slightly lower crop than usual on the farm, but has noticed more of an impact on the grapes sourced from other areas. “The vineyards in the dry-land and semi dry-land areas (such as Agter Paarl/Perdeberg, bigger Swartland and parts of Darling and Durbanville) are most affected by the drought. Depending on the location and the varietal, the harvest appears to be down by 15 to 25 percent,” says Spier communications manager, Marina Vermeulen. “It is a little early to say – we are now only 20% into the harvest – but the estimate is that we will be down by 20 to 25 percent,” she adds.

Lower crop might mean lower volumes, but is it all bad? While we might see less wine in our cellars, this could also mean that the end result will be produce of a higher quality. Francois explains: “A smaller crop can result in higher quality, as the smaller berries that result from dry, hot conditions have a more intense colour and flavour. However, this is also very dependent on the climatic conditions in the run-up to harvest time.” 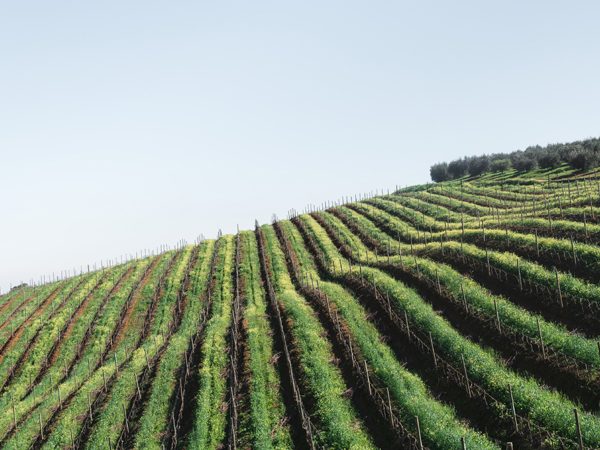 Lower crop might mean lower volumes, but is it all bad? Image by Matthieu Joannon via Unsplash.

This could also give the local industry an edge when it comes to wine exports. “A decrease in volumes available for exports can also enable South African exporters to negotiate better prices with international importers,” explains Christo. Alan Winde, Western Cape Minister of Economic Opportunities, adds to this by saying: “Reduced rain has meant an improvement in the quality of our produce, giving us a clear competitive edge in international markets.”

Perhaps the most serious consequence could be jobs in the industry. “The wine industry supports close to 290 000 employment opportunities. It is a concern that a lower harvest might have a negative impact on the number of seasonal labour opportunities,” says Christo from VinPro. “This is most definitely a concern from a social perspective, and here the industry will work together with the government and organised agriculture to find interim solutions,” he adds.

Due to the decrease in crops during harvest, the price of the produce will inevitably increase. VinPro agricultural economist Pieter van Niekerk has stated that there could be a spike in grape prices – from 7 to 20 percent – which in turn could mean that consumers will be forking out more rands for their favourite bottle. 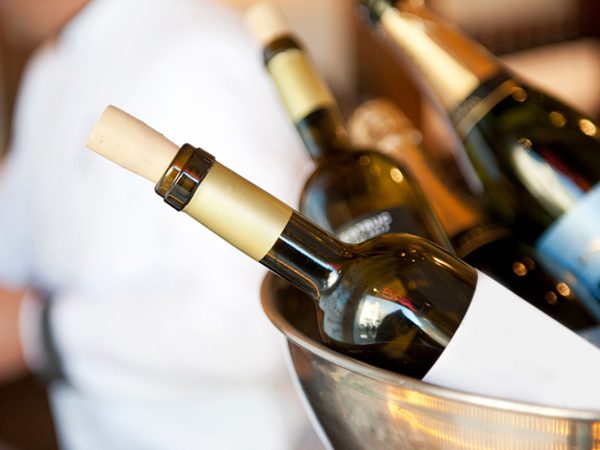 Wine farms throughout the Cape, no matter the severity of their area, have contingency plans in place to reduce their water usage and to delay Day Zero. Here are just a few examples.

At Babylonstoren in Franschhoek, the farm has managed to reduce their usage by 50 percent within a year. No municipal water is used on the farm and they rely exclusively on a borehole source. The farm also has a recirculation system that enables them to re-use water up to three times. 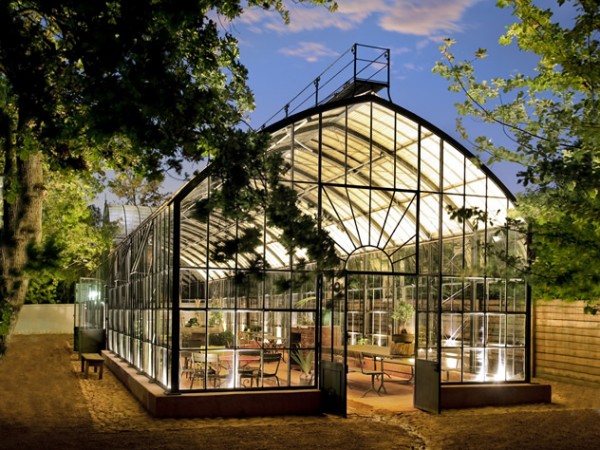 Outside The Greenhouse at Babylonstoren. Photo supplied.

Duncan Savage’s Savage Wines cellar is centrally located in Salt River, and with that comes a few more obstacles. “Wineries using municipal water are in big trouble – I’m one of them so we are having to get very creative. We are recycling as much as possible and making use of borehole water for most of the work. One has to truck this in, but at least it takes pressure off the potable water system. Recycling water until it can’t be used anymore is really important and something wineries will need to continue doing, even in times of plenty,” says Duncan.

Riandri Visser, winemaker at Cape Point Vineyards, explains that the farm uses their own treated dam water and that no municipal water is used. She adds, “In the cellar, we are catching any water used for cleaning and we sanitise and re-use it for cleaning floors.” 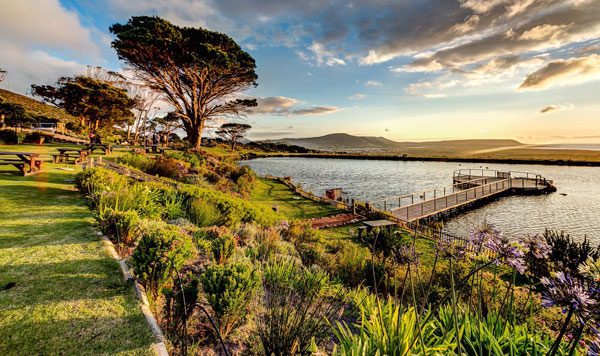 At Boschendal the farm was fortunate enough to fill its dams directly from mountain runoff generated by winter rains last year. This is partly a result of good pre-planning: the farm implemented a major alien vegetation clearing programme that has resulted in the quality and quantity of water increasing in their dam network. They also cover crops to reduce evaporation and only irrigate where and when necessary.

Graham Beck Wines has ensured to measure their consumption on a daily basis and educates workers on how to save water. They also assist the community by supplying water from their own boreholes.

Waterkloof in Somerset West have also cleared alien vegetation that would take a lot of water and have continued to do so for the last 15 years. The winery also collects any rain water from the roofs of the building through a closed system which drains into a rainwater reservoirt. This is used to irrigate the younger vines.

While there is a multitude of challenging tasks to overcome, it’s certainly not all doom and gloom. We may see the wine industry pulling together to delay and defeat Day Zero. And while lower volumes might push prices up, we can take solace from the possibility that 2018 could be a good – if scarce – vintage.

So, should we be stockpiling our wine?

While there’s no need to panic and start converting your pantry into a cellar, it’s probably a good idea to keep a few bottles of a good vintage cool climate sauvignon, sémillon, pinot noir or cabernet on the shelf so that, when the prices do go up, your wine glass won’t go empty. Plus, you’ll be doing certain built-to-last wines justice with a little extra aging time.