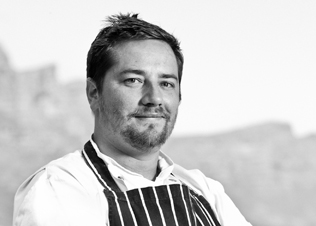 Award-winning local chef Eric Bulpitt, who Capetownians will know from The Roundhouse – and prior to that, Jardine – is to open a new restaurant on the Newton Johnson wine farm in the Hemel-en-Aarde Valley outside Hermanus later this month. The restaurant will be called simply The Restaurant at Newton Johnson, which perhaps suits the chef’s approach.

“I want to make less complicated food, and focus on really good flavours,” says Eric. The restaurant will embrace the farm-to-table concept, and the team will work towards growing their own vegetables, foraging in the farms and fynbos in the valley. Eric says he is also taking inspiration from mentor George Jardine, whose restaurant on the nearby Jordan wine estate is known for its simple, but gutsy flavours.

The winelist – like the menu – will be small and bespoke, and will start out with Newton Johnson wines. Eric does however indicate that future tastings may celebrate wines from the Hemel-en-Aarde Valley and Walker Bay region.

“There’s been such enormous growth in Hermanus. We thought it was ready for something special,” says Eric, who has just moved to the seaside town with fiancée Celeste, who will also be involved in the project.

The restaurant will take over the space occupied by the former wine estate restaurant, Heaven,  which closed three months ago, and renovations are currently in full swing. “The kitchen is the heart of any restaurant. I believe in breaking down the barriers between the kitchen and diners,” says Eric, whose kitchen will be even more open than Heaven’s. There will also be an open fire in the kitchen, which will allow the team to finish off meat over the coals, and roast beets, carrots and other veggies.“There’s a lot of soul in food cooked on open flames over wood,” says Eric.

The new space will seat around sixty diners initially, and will serve lunch six days a week, and dinner twice a week.

The restaurant is accepting reservations from the public from 19 September, in time for the Hermanus Whale Festival.

“We’re balls to the wall at the moment!” says Eric.