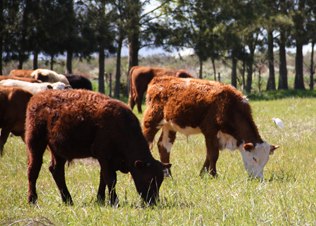 “Hello, my darlings,” says Farmer Angus as we approach the nine little greenhouse-like structures. There’s a gentle cooing emanating from the other side, where the snow-white chickens are gathered on the grass. “Hello, my beauty,” he says, reaching down and picking up one bird. She sits calmly against his chest, entirely unbothered by proceedings. “They’re the only commercially farmed chickens in the country that aren’t de-beaked,” Angus tells me, pointing to her orange beak.

I feel a tug on my foot, where, as if to drive the point home, one adventurous chicken is carefully untying my shoelaces with her beak.

I’m at Angus McIntosh’s farm at Spier Wine Estate in Stellenbosch, one of only forty biodynamic farms in the country, and supplier to many of our top restaurants .

We slip inside one of the structures to find an egg as yet uncollected for the day. It’s a far cry from the world of battery hens, where each bird sits in a space the size of an A4 piece of paper, stacked in cages as many as five levels high, de-beaked, de-clawed, and regulated to lay by artificial light.

Here, Angus’s egg-laying hens can come and go as they like; they effectively the run of the Spier estate, though they tend to stick close to their egg-mobiles, where they lay their eggs and roost at night.

“Would you mind filming me for a second?” Angus asks, passing me his camera. He cracks open the egg we found to show me the remarkably yellow yolk. While many commercial farmers add chemicals to create yellow yolks, Angus’s hens produce beautiful amber yolks without any artificial help. Their diet of grass takes care of that. “What does it taste like?” he asks, repeating my question, before slurping the raw egg into his mouth. “I can’t taste the pasture, but I can tell you they’re the best tasting eggs in the country.”

And crucially, apart from being delicious – used by the likes of Le Quartier Français,The Roundhouse, Overture and Terroir – they’re part of a larger, biodynamic vision for the farm as an eco-system.

It’s a satisfyingly complete circle. Further up the hill, it’s easy to see the chickens’ value. Where the egg-mobiles were placed just a few weeks ago are now rectangles of lush grass, reaching almost to my knees in some parts.

This of course, is crucial for Angus’s cows, whom we meet in a pasture a little way away. The cows receive no artificial feed to fatten them up, and hence require as much lush grass as possible. They’re moved three times in winter and six in summer, to take advantage of the energy-rich top third of the grass.

Wandering through the grass, and greeting his young bullocks affectionately as “my boys”, Angus looks as if he was born to farm. But, I’m surprised to learn, he started out on an entirely different career path, as a banker in London, working for Goldman Sachs.

So what changed his mind? “A book called The Omnivore’s Dilemma,” says Angus. Michael Pollan’s analysis of the options available to ominvores is also an indictment of American farming methods, many of which don’t differ greatly from our own.

Since he began farming at Spier, Angus has been asked to convert the Spier vineyards to biodynamic principles. We drive through the vineyards so that Angus can show me the work he’s begun doing in the past year to start off the five-year process. “Clover,” says Angus, pointing out the lush plants growing beneath each row of vines. Creating a carpet that excludes other plant growth, the clover eliminates the need for herbicides.

On his informative blog, Angus explains that to keep plant growth down between the vines – particularly that of ramnas, a virulent wild radish that can inhibit air flow and cause fungus – he also calls on his cows, who eliminate the need for tractor mowing and who helpfully fertilise the area while they graze. (Both with their manure and a chemical in their saliva that stimulates plant growth.)

Before I leave, Angus shows me the cool clay cellar, where he makes straw wine from a bank of chenin blanc with the advice of friends, who happen to include top winemakers Georgio Dalla Cia and Adi Badenhorst.

“For you,” he says, handing me a bottle of caramel-coloured straw wine. Ezibusisweni reads the label. “It means place of blessings,” Angus explains. Remembering the hen, playfully untying my shoelaces earlier, I can’t help but think it’s a perfectly apt name.

Angus will be one of the speakers at the Secret Festival, a two-day feast of workshops, talks and exhibitions taking place from the 27th to the 28th October 2012 at Spier.

Want to try Farmer Angus’s produce for yourself? Angus delivers within the Western Cape, and also supplies to a host of top restaurants. Click here for a full list of stockists.