Getting the dosa right is a recipe for success 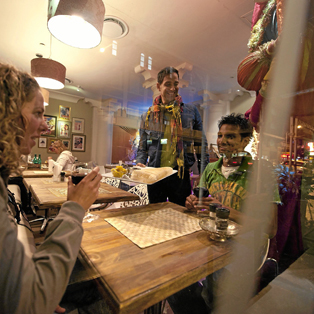 For ethical reasons I have avoided writing about Masala Dosa, which is run by my good friend Amit Raz. I have had more free meals here than I can count and have also paid for more than I can remember. The place has now survived for five years and remains popular, so it seems acceptable, after full disclosure, to give it a personal take.

When Raz, who is of Israeli origin, said he was going to quit teaching art to open an Indian restaurant, I told him that he was mad. Starting a new business in South Africa is not for the faint-hearted. The paperwork is not more onerous than elsewhere, but the bureaucracy surrounding it is.

Ticking new boxes for the government is wastefully time-consuming. Our banking system is punitive for small enterprises and the monopoly- capital structure of our economy is stifling. Developmental support in the form of information, advice and expertise is pathetic.

The result is not surprising. According to the Global Entrepreneurship Monitor and recent research conducted by Fort Hare University, we have about the worst failure rate for new businesses among the 80 ­countries surveyed.

Small business is risky enough, but a restaurant!

Besides our dreary economy, restaurants are an awful trade in which to be. For starters, you are only as good as your last meal. Returning the goods is not a desirable option. Margins are small and overheads rocketing — food prices are way ahead of inflation — and customers are fickle, always out to try the next new place.

The next new place usually opens with unrealistically low prices in an attempt to achieve market penetration. When these become realistic after months of cut-throat pricing, customers are off to the next place. So, you have to be either a food nut, nutty or unable to do anything else.

Raz is the first of these, a real foodie with a sharp nose. His journey, however, has been a steep learning curve. He opened a second Masala Dosa in Sea Point that failed after two years. But the original, in Long Street, is thriving. It has built an eclectic following, ranging from an artsy crowd and advocates from the nearby courts to tourists.

Many of the Indian tourists are quite traditional, with granny in a sari and running shoes waiting patiently until the patriarch of the family has sampled a dosa before deciding whether it is good enough to order for the whole family.

The decor is unlike any other Indian eatery in the city — modern and funky, with fake Bollywood posters, two giant puppets and, on the washroom roof, an upside-down cow. Raz and I cannot agree on music or lighting policy, however.

When he first opened, nobody else in Cape Town was serving dosa, a south Indian staple street food. Since then Bukhara has added dosa to its menu and the Eastern Food Bazaar has a dosa stall.

Dosa is a thin pancake made from rice and lentils, so it is gluten- and fat-free and nutritious. With his crazy idea to open a restaurant, Raz, then all of 27 years old, headed off to Udipi, home of the dosa, to research, train and bring back equipment. When he returned, he discovered to his horror that what worked in India did not work here. I remember the opening-night panic well: everything but dosa was on the menu, but he has subsequently got it right.

Raz serves his dosas with various ­fillings: potatoes sautéed in onions with curry leaves and mustard seeds; channa (chickpeas) or mixed beans in a rich gravy; chicken fillets and ­butternut with aromatic spices and coconut cream; or lamb cubes in a tomato gravy. All dishes are spicy but mild.

The dosa is accompanied by sambar, a vegetable and lentil broth, and extras include chutneys: chili, coriander — my favourite — or tomato. Chutney means sauce in India and is very different from our peach blatjang. Clients are encouraged to eat with their hands, but there are napkins and cutlery on every table.

Raz’s latest adventure on the menu is a marvellous six-course meal of surprise dishes for R100. Booking is essential.