Gold dining in a mining town 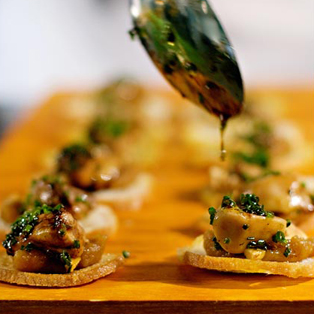 Chef Marthinus Ferreira had taken his first night off when I visited his curiously named DW Eleven-13 restaurant. Despite this (he told me later he had phoned every 20 minutes to check on the evening’s progress), the staff seemed to get on very well without him.

It has been open for two years and has attracted a loyal following among those looking for food and service a cut above what is usually found in Johannesburg. It’s an elegant bistro and there’s a sense of occasion to a visit — you’re welcomed by name and then taken to your table.

Fussy and very fresh, the beetroot-marinated Scottish salmon arrives in a loosely formed slab, on which is perched a piece of goat’s cheese with a dusting of miniature herbs. Next to this is a dredging of oat crumbs and horseradish, and the plate is studded with diminutive piles of lumpfish roe and finished off with a brunoise of pickled cucumber and beetroot.

Welsh rarebit bruschetta is indeed satisfying if you seek comfort in melted cheese, and there was a pleasing contrast between matured cheddar, caramelised onions and a balsamic reduction.

Beer-battered prawns come with stripes of tomato chutney on the plate (again, with those herbs) and a good guacamole.

The kabeljou fishcakes are more like rissoles, nestling in a puddle of gribiche with a slice of lemon, and apparently the rib-eye steak with a bone-marrow sauce, and excellent triple-cooked chips can’t be taken off the menu.

Heston Blumenthal and Gordon Ramsay are name-dropped as Ferreira’s former employers, which is technically correct. Assistant manager Lindi Venter says he worked at a station in the Fat Duck kitchen “near Blumenthal”. Still, something seems to have rubbed off as DW Eleven-13 (named for its location in the suburb and its shop number) was voted one of Eat Out’s top 10 restaurants of 2010.

Venter says Johannesburg “doesn’t have the mountain setting” and Jo’burgers tend to like “harder, cheaper liquor” (which sounds right for a mining town) but, on the other hand, there are plenty of people here who don’t turn a hair at paying R500 a head for the tasting menu, served on the third Monday of every month.

“This isn’t going to break the bank?” a diner asked her partner, who “shushed” her.

It could be well worth it.