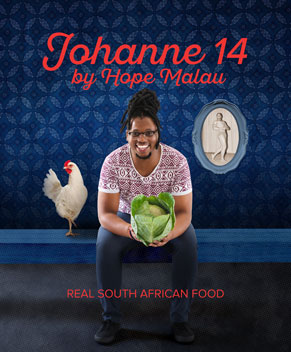 The book takes its name from the colloquial name for a head of cabbage – an ingredient, in township cuisine, so ubiquitous and essential for a wholesome meal, that it’s named after the Bible verse, John 14 (often regarded as the most important one in the religious book). The implication: If you’ve got a head of cabbage, you should never let your heart be troubled. But what other traditional township dishes should you try?

We chatted to Hope to find out, as well as where he goes to get great home-style food around South Africa, and how he went from Klerksdorp to editor and recipe book author.

How did you get into food? 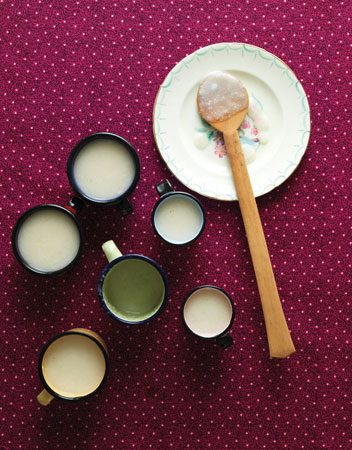 My dad used to work in the kitchen at a mine compound and he used to take me to work with him when I was sick. One day he asked the chef to make me breakfast and the chef served me a sunny-side up egg. It was so unusual, biting into the yolk and having it all run down my face. I was so amazed. I was only used to scrambled egg. I thought, what a messy job! But I got used to it.

My dad also used to take me on his shoulders to the hostel market. There was ox liver, wild spinach and organic eggs and it was all very cheap. That was an experience, though – the meat was just out there, with people pushing the flies away. But the end product, once it was cooked, was amazing. I remember sitting on the kitchen counter and tasting that delicious ox liver.

From there, I studied cheffing in Rustenburg and cooked in some restaurants in Cape Town, before I got into media.

How did the recipe book come about?

I was on the bus to the Galliova Awards and my manager at Drum, Este Langeveldt, asked me why I didn’t write a book. I was surprised, and not sure if I could do it, but she was sure I could. After that, she kept asking me if I’d started yet until I did.

I started calling family members and talking about traditions and cultural practises. My uncle – Kabelo Mokoena – is a miner in Rustenburg, and he is very knowledgeable about culture and how things are done, so he was the biggest help with this book. 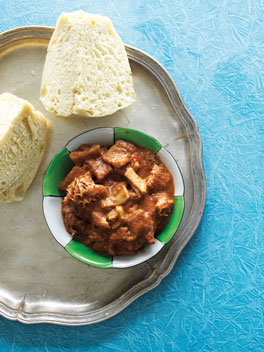 Hope’s mogodu will convince anyone into loving tripe. Photo supplied.

Where do you go to find great food like you grew up with?

You can’t find great traditional South African food in restaurants in Cape Town. You can get amazing fish and chips and burgers, but not traditional South African food. We really need to work on that. Some supermarkets have started stocking the ingredients I grew up with, though. I love skopo – sheep’s head – and now you don’t need to go to a township anymore to buy it – some butcheries and stores are stocking those cuts of meat.

Dombolo
Malome’s African Food in Klerksdorp is a place where you find already cooked meals during lunch. They specialise in home cooking – things like salads with pap or dombolo and vleis.

Kotas
Shops selling these are everywhere in the North West Province and in Gauteng. It’s the number one meal because just R10 gets you everything: A quarter loaf of bread filled with chips, egg, polony, Russians, Viennas, and atchar. They come wrapped in plastic and, when I was a schoolkid, it used to be a trend to put it behind the back wheel of a car so that when it reversed, the kota would get squashed flat and all mushed up. Amazing! (Check out our guide to 5 great kotas here.)

Magwinya
George and Brothers Supermarket in Jouberton Sun City is a supermarket, but they also do dumplings in the mornings and sell them for 50c each. They’re great when you find them still hot in the bucket. I normally enjoy them with atchar and a cup of tea.

Chisa nyama
Vito in Kraaifontein and Maphindi Chisa Nyama both have a great vibe and loud music. Both are great for eating meat with friends. Adwa Cafe in Kraaifontein also does really good meat. They make a chuck steak spiced with a dry rub. It’s cooked really well; you can tell it’s not rushed.

Fish and chips
If you haven’t eaten the chips from Vaal Fisheries in Klerksdorp then you haven’t experienced the Klerksdorp vibe yet. They sell fish, Russians, pap and meat, but they’re famous for their spiced chips. It’s always busy, from lunch till late. You need to be great at manoeuvring and shout out your order from within the crowd.

Child-friendly spot for eating with kids:
I have a five-year-old son, so I tend to avoid formal restaurants. He’s a flexible kid who loves attention from the ladies, so he loves Shawarma Express in Sea Point because he can stand on the chair while eating and say hi to ladies sitting at the table next to us. We also enjoy Fish on the Rocks in Hout Bay because he can run around and chase after seagulls while eating.

Mageu – a porridge made from fermented maize.
Curried tripe – a must-try, even if you don’t like tripe!