Luke Dale-Roberts sure has been busy. The chef-patron at The Test Kitchen, SA’s Restaurant of the Year for 2012, 2013, 2014 and 2015, has just this week opened his pop-up at The Saxon in Johannesburg; his development kitchen and bar in Woodstock, Naturalis, is in its second month of trading; and now Luke has yet another new venture – The Shortmarket Club, due to open in Shortmarket Street in the heart of Cape Town in June 2016, in conjunction with chef Wesley Randles and restaurateur Simon Widdison, both of The Pot Luck Club. 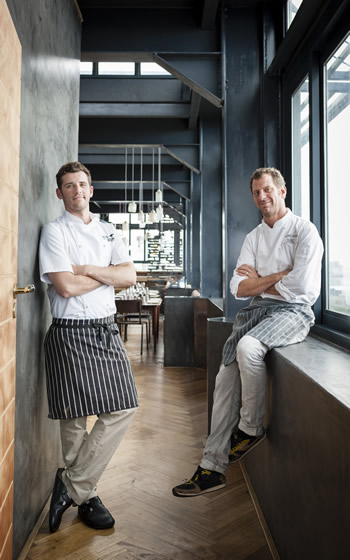 Keen food lovers can get a taste of what this new offering has in store at THE BREAK – FAST CLUB / A Shortmarket Street Introduction, held at Naturalis, in the second week of February. The three-course pop-up breakfast menu is priced at R200 per person, and includes coffee by Espresso Lab Microroasters. For an additional R60 per person, guests can enjoy a glass of Avondale’s organic Armilla Cap Classique. Diners can be assured of bold, fun and fresh flavours all the way, says Luke.

Located in two converted containers, Naturalis has seating for 12 people only, so best you get your foot in the door soon by sending a mail to Naturalis. This special peek into The Shortmarket Club will run for five days only, from Monday 8 February to Friday 12 February 2016, with two seating times, 7.30am to 8.30am and 9.30am to 10.30am.

This is but the first of a series of pop-ups to showcase The Shortmarket Club in the build-up to its opening in June. This street seems to be the location of the moment, with achingly hip artisanal cocktail bar Outrage of Modesty recently opening up there alongside popular hipster haunt The House of Machines.

Keep your eyes on Eat Out for updates on the Naturalis Charcuterie and Wine Bar concept coming to Cape Town soon, as well as further developments on The Shortmarket Club.