Lunch at the 5th best restaurant in the world 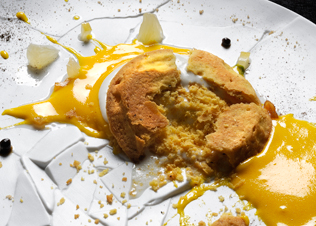 It’s round about 35 degrees on the day we head to Osteria Francescana for lunch, and while walking there we stick to the shadows offered by Modena’s narrow cobbled streets.

Osteria – meaning ‘informal tavern’ – is something of an ironic name for Massimo Bottura’s eatery. This is the number five restaurant in the world, according to The World's 50 Best Restaurant Awards sponsored by S. Pellegrino, the best in Italy, and the proud owner of not one, but three Michelin stars. I’m ever so slightly nervous.

“Massimo phoned from Taiwan to suggest a menu of about fifteen dishes for you to try; would you like to try that or order off the menu?” enquires one of the waiters.

Naturally, we submit to Massimo’s wisdom, and it begins, like a ballet.

“The amuse bouche,” the waiter says, as our plates land in front of us in unison. The two waiters, I notice, catch each other’s eyes before putting down the plates, so that the event is perfectly synchronised. Almond granita with coffee, candied bergamot, oregano, capers and sea salt.

The ice crystals dissolve to leave an intense almond flavour, like marzipan.  Buried under the snow are coffee beans and little candied sweets. It’s fun – like discovering treasures hidden in your sandpit as a child.

Before we know it, the next course appears. Deconstructed razor clam, we are told. I ate these improbably long crustaceans in Venice; they’re one of those creatures where it’s hard to tell which end is which, with a firm texture, almost like calamari. Massimo’s rendering is an artwork: served in a ‘shell’ of very fine pastry and flavoured with seaweed. Inside, the razor clam meat is perfectly tender, decorated with little leaves of seaweed, like a clam plucked fresh from the sea.

This playful, light dish is followed by Baccalà mare nostrum: salt cod with pesto, a broth of green tomato, and green olives. It floats like an iceberg in the Mediterranean-flavoured sea. “An Emilian chef dreams of the Mediterranean sea,” Massimo explains of the dish. “Emilia is a landlocked territory, 150 kilometres from either coast.”

Our favourite of the fish dishes, though, has to be An eel swimming up the Po River: saba-lacquered Adriatic eel served with cream of polenta, campanine apple jelly and burned onion powder. Saba, our waiter explains, is made from grape must, a sweet and sour, sticky black sauce with some of the notes of the balsamic vinegar it will one day become. It seeps into the eel’s sectioned flesh, filling it with rich, sweet, tanginess that sends me into raptures.

“Eels were a great source of income for the Este family, the Dukes of Modena, who were forced to move from Ferrara to Modena in the 16th century,” says Massimo of this dish. “Each accompanying element is fruit of the eel's imaginary journey from the Adriatic sea to Modena, via the Po River.”

This is the mark of a top chef: there’s nothing extraneous on the plate; nothing is here for decoration or affectation, and everything is full of flavour, and meaning. In a video on the restaurant’s website, the dish’s story is also about hunger, about the un-seasoned polenta and apple cores that are eaten by the poor of the region.

Speaking of his own food, Massimo mentions artists such as Joseph Beuys and Lucio Fontana, and it strikes me that eating is a similar intellectual experience to viewing contemporary art. I’m constantly trying to read the signs, interpret all the references.

It’s not an easy task. Some of the flavours I can honestly say I’ve never tasted before. Others – like the flavour of a colour – capture the concept of synaesthesia. Think green, the vegetable course, is a little island of green asparagus, shellfish, shrimp and fresh market vegetables in a green sea of chlorophyll and oyster mayonnaise. Massimo says this dish is a deep reflection on the relationship between what we eat and where our food comes from. And the slightly sour, raw flavour of the chlorophyll will now forever appear in my mouth when I look at the colour green.

As green and fresh as the previous course is, the next is rich. The beautiful monochrome Five temperatures and textures of Parmesan is one of Massimo’s signature dishes. A fluffy soufflé spliced with a Parmesan crisp – like a biscuit in a scoop of gelato – topped with a light-as-air foam and a rich cream, are each made with different ages of the precious cheese, creating an intense meditation on the precious export of the region.

The wines – all organic – are nectar. I’m not expert on Italian wine, but suffice to say they’re each events in their own right. There’s a cloudy white Sicilian Serraglia Bianco Zibibbo (a new grape for me) with a hint of peaches, a Timorasso Derthona Sterpi with notes of almonds, and an Occhipinti Il Frappato, which I’d dearly like to take home with me.

We finish with Oops! I dropped the lemon tart, which perhaps gives away the most about the chef, his utter reverence for food, his understanding of its social, political and historical implications, and a healthy sense of humour.

Says Massimo, “I was totally obsessed with food as a child, but very impatient as a young chef. When my mother was teaching me her technique for Emilian crostata crust, the first couple of batches turned out crumbly or too hard. Every time I was dissatisfied I would throw the pie on the table and blame her. After many broken pies, I learned how to knead the dough properly. I never broke another pie until last year when one literally fell on the floor. Only then did I think about how important those first pie lessons were to me, and appreciate how very patient my mother was with me… This dessert, by the way, is now my mother's absolute favourite!”

Click here for a gallery of all the dishes.

Massimo Bottura, chef at Osteria Francescana, is coming to Cape Town. The chef is one of the distinguished speakers at the inaugural Eat Out DStv Food Network Conference, taking place this November. Click here to find out more, or buy your ticket.