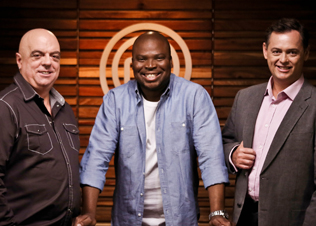 After the potato-peeling chip-chopping challenge from their first introduction to Bootcamp in episode 3, the 25 hopefuls were taken to the Nirox Foundation for their final wooing of our inimitable judges Pete Goffe-Wood (PGW), Andrew Atkinson (AA) and Benny Masekwameng (BM).

Some of the contestants were a bit baffled by the artistic setting, leading Alistair to wonder if they were “fishing for trout or are there chickens round the bend?” PGW challenged the hopeful cooks to create works that reflect their own unique style. “We want you to be inspired, with your style and skill displayed in a spectacular way that we would want to take you to the MasterChef kitchen”. And so the task of the day was to prepare breakfast, which prompted Seline to remark: “My world stops, it goes silent, all I hear is a ticking bomb… I don’t like breakfast, I don’t cook breakfast, I don’t eat breakfast.” A sunrise special of the day it was not going to be!

It was interesting to see how the contestants approached the breakfast challenge of cooking outdoors on a gas Weber-style braai. While I’m sure some of the dishes are consumed for breakfast somewhere in the world (tobacco-smoked chicken, pork fillets with potato fondant and Korean-style marinated beef with coconut rice for instance!), some of the contestants did exactly what PGW asked of them – think out of the box. And so we had egg cloud fluffs with fruit purée, nutty oat crunch and spun sugar; snoek salad on French toast with apricot jam; a trio of trout dishes; potato rösti with various toppings; and even a bread and butter pudding with stuffed mushrooms and tomato skewers.

A few moments of panic and drama always adds a good dose of expectation for viewers, starting off with Zane’s meltdown, Sherwyn’s flopped soufflé, and when PGW declared to Seline that she wasn’t going to crack it with the caramelising for her spun sugar orbs, she armed herself with fierce determination, even shouting at the stove top, “You make caramel, you hear me? I’m the boss of you!” Eish, the heat was certainly on.

By this time, the judges were salivating at some of the dishes being prepared and were suitably impressed with the choice of ingredients from the pantry.

“Packing for Paarl” And then there were 16… It was evident from the taste test which of the contestants were shoo-ins for a workstation in the Nederburg base camp that will test their kitchen prowess and ingenuity. Comments ranged from “bloody marvellous” and “I hate talking with my mouth full, but that is awesome” to “it’s the type of dish I’d expect to find in a top restaurant”. And we had confused dishes, white chocolate gone wrong, chicken that tasted like cigarette and dumplings that went south. Our judging trio was in top form. The 16 finalists earned their aprons in fine style and you can be assured of a rollercoaster ride with some very colourful characters and fabulous food over the coming weeks.

Sherwyn, a nightclub manager from Durban, said, “I’ve never used a Weber. I’m just a coloured guy from Newlands. I know about fire, potjie pots, stoves and ovens. That’s about it!”

Tune in next Wednesday morning for a run-down of Tuesday’s episode, and check out our MasterChef SA page, sponsored by Nederburg, for weekly updates.