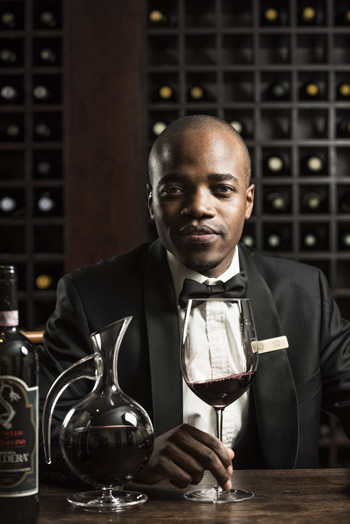 Lloyd Jusa, sommelier at Five Hundred at The Saxon in Johannesburg.

Lloyd Jusa, sommelier at Five Hundred at The Saxon in Johannesburg, has been named the winner of the Wine Service Award at the 2015 Eat Out Mercedes-Benz Restaurant Awards held at SunExhibits Centre at GrandWest on Sunday 15 November.

Lloyd left his career in corporate governance once he found his real vocation in celebrating the fruits of the vine and enrolled in the sommelier programme at The Saxon. After completing his introductory certificate with the Court of Master Sommeliers in the UK, he obtained his certificate in Vienna before returning to South Africa.

In a year in which the judges were very impressed with the overall quality of wine service, Lloyd blew the competition away. Chief judge Abigail Donnelly explains, “Lloyd delivers superior, sophisticated and polished wine service that shares in the philosophy of the chef and the menu at Five Hundred. He has a great way of imparting his unique wine knowledge.”

After charming all the guests with his banter while on stage to accept his award, Lloyd became more serious: “This is a really humbling experience for me and I am so honoured to be up against my talented sommelier friends.”

“It is wonderful to feel so appreciated”

Lloyd continued, “Wine service is all about connecting with the guests and not imposing on them. It’s about creating memories – that’s what is important.”

Lloyd Jusa was named the winner of the Wine Service Award at the 2015 Eat Out Mercedes-Benz Restaurant Awards held on Sunday 15 November at SunExhibits Centre at GrandWest. See a list of all the winners here.