There’s a cool new brew in town, and it combines two of our favourite things: coffee and beer technology. Nitro coffee – cold-brewed coffee that’s infused with nitrogen bubbles and served from a beer tap – has come to SA.

Yes, you read that right.

A photo posted by Stumptown Coffee Roasters (@stumptowncoffee) on Feb 4, 2016 at 5:43pm PST

The idea, according to Tech Insider, was first dreamed up by an American food scientist, Nate Armbrust, who worked at Stumptown Coffee Roastery in Oregon. His goal: to infuse small bubbles into cold-brew coffee to give it a rich, creamy mouth feel. He found that the beverage did feel thicker and creamier thanks to the bubbles, but it also slowed the degradation of the coffee by forcing out the oxygen and thus preventing oxidation, which is what gives coffee a bitter, sour taste. First, the coffee is extracted via a cold-brew method for up to 16 hours. Then, the resulting cold-brewed coffee is put into a pressurised keg with nitrogen, where it slowly infuses with the gas. Finally, it can be served chilled from a cooled draught tap – exactly like the taps from which you’d ordinarily receive an icy pint.

We can report that the beverage does have a surprisingly creamy mouth feel. Flavour-wise, you can taste that it’s cold-brewed – nuanced, potent, but perhaps slightly less sour. And it might be our imagination, but there’s something slightly Guinness-like in its flavour. (To be clear, there’s no alcohol in nitro coffee – although the nitrogen kegs are the self-same as those used to brew stouts and other nitrogen-infused beers.) The reason for its popularity, in our humble opinion, is how it makes you feel after you’ve sipped it – nitro coffee can be extremely high in caffeine. “I think that’s why it’s so popular in the states,” admits Theo Snyckers of Kamili, who’s brewing a magnificent version of nitro coffee in Cape Town. The caffeine content is not to do with the nitrogen, but rather the extraction method, he explains. While an espresso-based coffee has contact with beans for a matter of seconds, a drip coffee or vat-brewed coffee is in contact with the beans for much longer – sometimes up to 16 hours – meaning that the caffeine has a lot longer to infuse.

At Origin in Cape Town, baristas also now serving a nitrogen-infused tea made with cranberry, pineapple and mint. Elsewhere in the world, coffee geeks are taking the trend even further. According to Eater at Cuvee coffee in Texas, you can get nitro coffee in a ready-to-drink can. At Mighty Brew Bros in New York, you can get a nitro pop – a nitro coffee with a coffee ice lolly resting in the drink – and a nitro float, with, you guessed it, a scoop of vanilla ice cream on top. Also on offer: a nitro pina colada cocktail, and a nitro matcha tea. We can hardly wait.

Where to try nitro coffee in SA 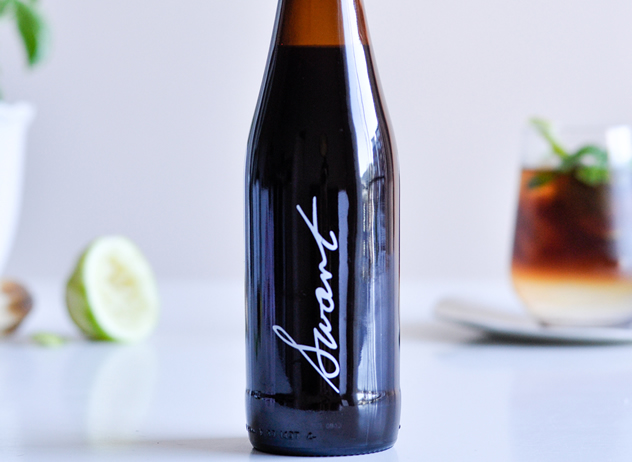 Swart in a 330 ml bottle is equivalent to one cappuccino. Photo courtesy of Nicette dos Santos.

Swart
If an intense caffeine rush is not your bag, try out a bottle of Swart online from Cape Coffee Beans. Durbanite Ernest Andrews and partner Nicette dos Santos have developed a recipe in which the caffeine content per 330 ml bottle is equivalent to one cappuccino. Flavour-wise, they promise a light roast with strawberry and peach notes and a smooth creamy finish. Four glass bottles will set you back R199 on the Cape Coffee Beans site. It’s also sold at Frankie Fenner in Cape Town. 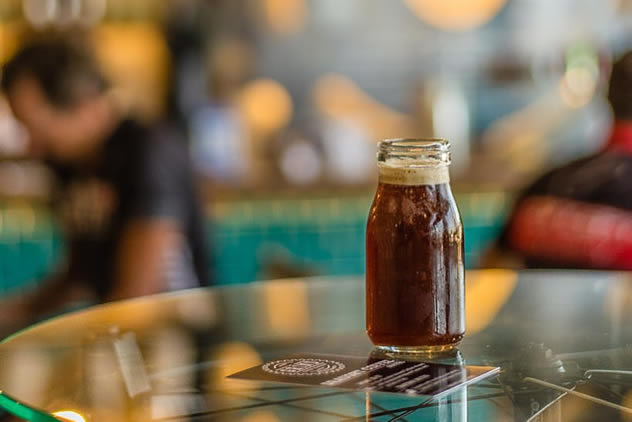 Coffee at The Grind. Photo courtesy of @za5.

The Grind
The creator of the now-famous coffee cone is also something of a nitro expert, and spent time with the original creators in the USA. At The Grind in Melrose Arch, Dayne Levinrad uses a very light roast with more floral notes, brewed using a combination of hot and cold brewing methods to get the best flavour out of the beans. He then takes it through a series of gases over a period of two weeks to get a well-rounded chocolaty, Guinness-like texture. His brew is served in an iced milk bottle. R35 for 250 ml serving.

Origin (De Waterkant)
Here beans are sourced and roasted for natural sweetness. Then the coffee is extracted for 12 to 16 hours in a Yama slow-drip coffee maker (one of those enormous glass contraptions that look like they come from a Victorian science lab), before being put into a pressurised nitrogen keg for around 48 hours. The Origin team found pure nitrogen to be best; a carbon dioxide mix creates a more sour brew. Alternatively, try a nitrogen-infused tea, currently being made with cranberry, pineapple and mint. The coffee is R30; nitro tea is R25.

Cove (Woodstock)
Jonty Medcalf and partner Kelly serve up nitro coffee every Saturday at the Neighbourgoods Market at the The Old Biscuit Mill. Their coffee is produced with their normal blend of ethically sourcedand locally roasted Peruvian, Honduran andEthiopian coffee. These then go through the cold-brewing process for over 12 hoursand are double filtered. Over a period of a few days, they nitrogenate the cold brew through a series of steps that involves controlling the temperature and pressure in the keg. The result is a deliciously creamy cold brew that pours very similar to a Guinness, with cascading nitrogen bubbles and a creamy head. R30 for 330 ml.

#Regram from @peteyuilljohn enjoying some chilled cold brew in Port Elizabeth. We love the Friendly City Remember you can order six packs of Cove online through @capecoffeebeans and they deliver country wide #coldbrew #coldbrewcoffee #portelizabeth #easterncape #southafrica A photo posted by Cove Cold Brew | Cape Town (@covecoffee) on Feb 1, 2016 at 2:43am PST

Kamili Coffee
on Long Street Theo Snyckers of Kamili favours brewing his coffee in a large vat over the drip method, so all of the coffee is exposed to all of the water, all of the time. He uses very coarsely ground coffee and Mountain Falls spring water. “My dad’s a doctor and biochemist,” he explains, “and we worked together to figure out the best way to get the most consistent result.” After brewing, the cold brew is put into pressurised nitrogen kegs before being served. The result is creamy black brew with lots of fruity flavour – and an intensely strong caffeine kick.

Have you tried nitro coffee yet? Let us know what you think of it in the comments below.