Partner content: Taking it to the next level in the S.Pellegrino Young Chef 2020 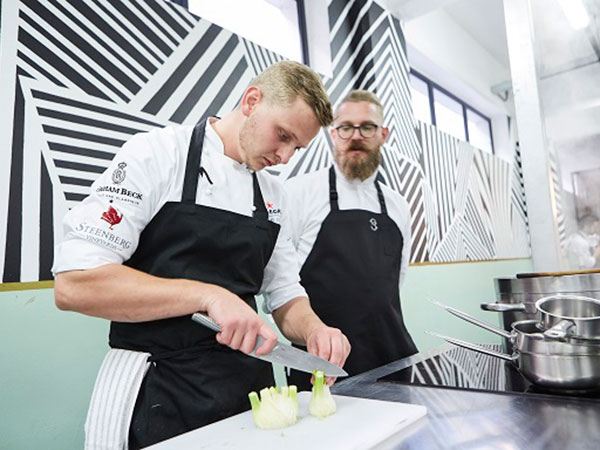 The prestigious S.Pellegrino Young Chef takes place over two years, challenging young chefs from all over the globe to come up with a signature dish that will impress judges selected from the highest levels of the global gastronomy scene. The S.Pellegrino Young Chef Africa & Middle East Regional took place last October in Cape Town and the winner was Paul Thinus Prinsloo. Paul is the chef de partie at The Restaurant at Waterkloof, the 2018 Eat Out Restaurant of the Year.

Normally he would now be gearing up for the Grand Finale, which was scheduled to take place in Milan in May, competing against the 11 other regional winners for the S.Pellegrino Young Chef 2020 title. This has now been postponed to May next year. In the meantime, Paul tells us more about his experience of the international culinary competition so far and how it first captured his imagination.

“When I started at Waterkloof, one of my colleagues was busy doing a dish for S.Pellegrino Young Chef. I went to read about it and found it interesting that there was a competition that promotes young chefs to such an extent on the international scene, so I decided to give it a shot.”

The first time he entered, his signature dish got him to the S.Pellegrino Young Chef Africa & Middle East regional in Dubai, but there he found himself unprepared for the demands of such a high-level competition. “I was way too cocky. I didn’t do nearly enough practice and, lacking confidence, thought I’d smash it quickly with a cold dish that I was familiar with and that didn’t require too much cooking. I didn’t make it.”

He immediately decided he would enter again for the 2020 edition and do it properly the second time around. “I started working on a dish and by the time the entries opened, I already knew what I wanted to do and how it was going to look.” Paul submitted his Bouillabaisse 2.0 signature dish and, once he knew he’d been selected, he practised his dish against time. This is where the role of the mentor came into its own for him, a role that is fundamental to the S.Pellegrino philosophy of nurturing and growing the talent of young chefs in the industry as a whole.

Paul chose Gregory Czarnecki (executive chef at The Restaurant at Waterkloof) as his mentor. He’d already conceptualised, created and submitted his dish by himself. “At the end of the day it still has to be you on the plate,” he says. Where the mentorship came in was in making refinements to the execution of the dish. “Instead of the bouillabaisse sauce being a consommé, he suggested making it a beurre monté; instead of oven-baking the fish he suggested poaching it; and we made a few minor changes to perfect the presentation,” Paul explains.

A mentor is also a huge support in the mental preparation for the competition. “He made me practise my dish once a week over eight weeks within the five-hour timeline, then he’d taste it and give feedback to work on until we were both entirely happy.” This mental preparation helps in transitioning from your own kitchen to the pressure of the competition space, he says. “At the regional, I walked into the cooking school and found we’d be cooking on induction tops, which I’d never cooked a full dish with before, so it was a challenge. But because I’d practised so much, I knew I was ready. I’d worked out my time schedule and stuck to that.”

Paul’s advice to other young chefs:

Paul’s preparation for the Grand Finale will start soon. “I’ll be practising cooking my dish in even less time, four hours instead of five, so that I have time to fix anything that goes wrong. And working on my presentation.” The pressure is on for the final, cooking for such an eminent panel of judges. “It’s not often you get the opportunity to present a dish to the head chef of the number one restaurant in the world. So to try and wow them is going to be a big thing,” says Paul. “There’s not going to be time for any error.”

The S.Pellegrino Young Chef competition provides an opportunity otherwise unavailable to most young South African chefs to be nurtured and promoted on the international gastronomy scene, and Paul is determined to make the most of it.

Visit https://www.sanpellegrinoyoungchef.com for the latest news on the competition.