The Restaurant at Newton Johnson: a contender for the nominees list? 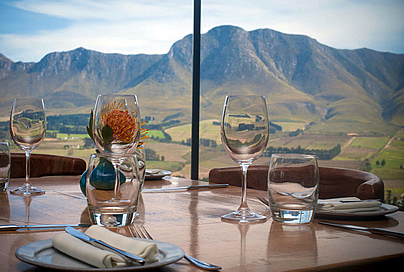 When Eric Bulpitt left The Roundhouse last year we were thrilled to hear he was going out on his own, with wife Celeste (plus some mentorship from George Jardine of Jordan), and taking over the old Heaven space at Newton Johnson estate in the Hemel-en-Aarde Valley. Now that the dust has settled, Katharine Jacobs reviews The Restaurant at Newton Johnson.

The food
Hot little white bread roll balls with butter start proceedings, while we peruse the concise three-course menu. Fresh and seasonal are the order of the day here, and the presence of producer’s names highlights the care that has gone into sourcing the best of local produce.

In the interests of proper research (and to compare it with the famous Noma-inspired version that used to be served at The Roundhouse) I start with the vegetable salad. The plate of veggies that arrives feels a little austere, but the pickled cucumber and carrots pair nicely with the porcini crumble and brinjal purée. 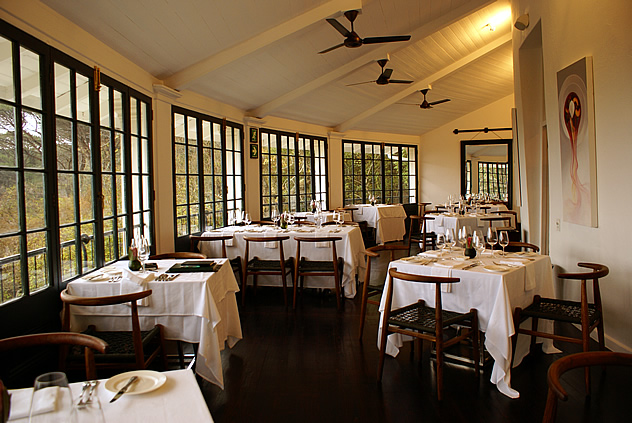 Because I have my family well trained, I also sample the slow-braised beef tongue with carrot purée and tasty homemade mustard. It’s tender as butter, but ever so slightly bland (we miss salt on the tables, here). The olive oil-poached yellowtail is incredibly moist and swimming in a delicate tomato emulsion with touches of amasi and celery.

For mains, I order the cashew-crusted hake, a lovely rendition that successfully convinces me that the fish belongs in places other than a thick layer of batter. The Glen Oakes pork loin with braised lentils and a white bean and truffle espuma is tasty enough, and the aged beef sirloin with pickled and butter-poached turnip is pretty good. (My brother is annoyingly smug about the crispy young potatoes that accompany it, and I am left with no choice but to steal one.)

The undisputed winners of this section of the meal, though, are the three bowls of chips we order as a side, having seen other tables do the same. Triple-cooked, they are exquisitely crunchy and golden. (I wish they’d come with an aioli though – having ordered fish, I am forced to swipe meaty juices from adjacent sirloin plates, for dunking purposes.) They also need better draining – one or two are dripping oil. 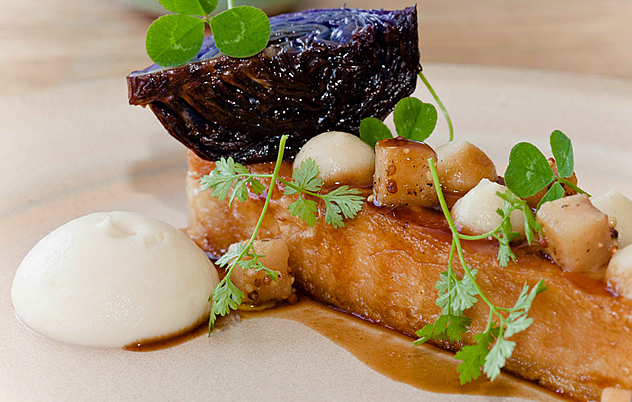 The Restaurant at Newton Johnson

Eric has a definite eye for plating – there’s a visual delight in each plate that arrives – but he has a tendency of spotting of ingredients around the plate in several places. I watch my family of less invested eaters dutifully eat round everything they deem to be a garnish, and thus miss out on some of the flavours they’re meant to be experiencing. Perhaps better sometimes to serve a steak in one piece with a sauce with a pile of potatoes and be clear about it.

For dessert I have an Eton mess, which comes with a heap of slightly lurid pink foam, too-hard meringue, and a totally incredible coconut ice cream. I offer it round, carefully shielding the ice cream quenelle from marauding spoons.

I claim tax from my brother who has predictably ordered the chocolate mousse (I think this plating needs a second look), which is suitably rich and chocolatey, though the orange is very tart.

The lemon verbena panna cotta with pistachio and honeycomb is the most beautiful of the desserts, and fairly subtle. (I want a bigger whack of honeycomb here, but perhaps that’s my over-active sweet tooth).

Nobody orders the butter-toasted brioche with Camphill milk whey sorbet, pears, oats and almonds, which is annoying because it sounds kind of amazing. 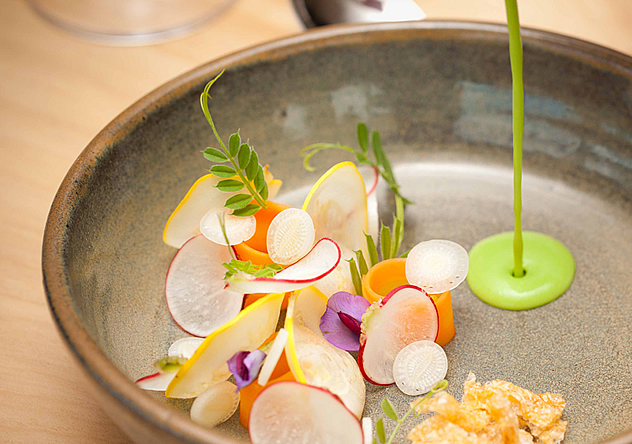 The Restaurant at Newton Johnson

Wine
The winelist comprises predominantly Newton Johnson wines (they offer a top-of-the-line range, plus a more affordable Felicité range), with some bubbles and dessert wines from elsewhere. There is a bit of a mark-up on the Newton Johnson wines – which might seem a little unreasonable given the extremely short distance they need to travel from the vine to table – but doesn’t actually bother me, given how affordable the food is. (They’ve got to break even somehow!)

Ambience
The Hemel-en-Aarde Valley is a breathtakingly beautiful part of the world and this restaurant has one of the best views. The restaurant décor is designed to take advantage of the view, with some stylish designer chairs and tables, but needs a little finessing. The floor –which resembles rough patio tiles – could definitely do with an update. A bigger concern is the acoustics. It gets so loud in one of the rooms that it’s a little hard to hear the rest of my party. Some soft furnishings are needed pronto to soak up some of the sound on busy days.

Service
Relaxed and not in the least overbearing (which is a cardinal sin in my book). We do need to summon the waiter once or twice though. Bookings are also taken in a staggered fashion, to help the small kitchen cope, so be aware that you may wait a while if you arrive late. 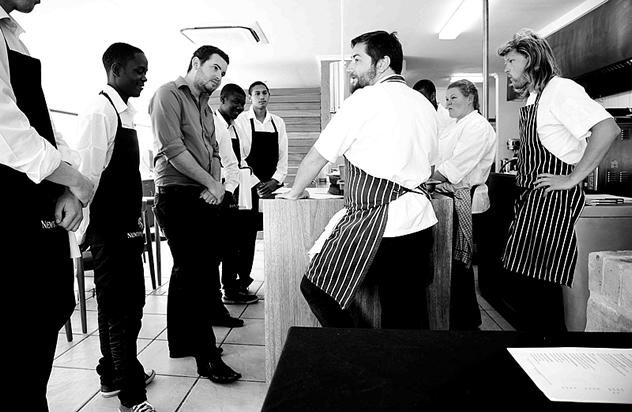 Chef Eric Bulpitt of The Restaurant at Newton Johnson

The verdict
This is definitely food with ambition, but I can’t help but feel it needs more gumption. Even dishes like the sirloin feel a little tentative – I miss the exclamations of joy from my fellow diners. The restaurant only opened in October 2013, so it will perhaps take a little longer for Eric and his team to find their voice and to really push their flavours. The foundations are there, though, and it will be interesting to see what the judges make of it come nomination season.

Besides that, at just R220 for two courses and R285 for three this is a great value fine dining option.