We review Borage, the new gourmet brasserie on the Foreshore

Monday, May 26th, 2014 by Linda Scarborough and Jeanne Calitz 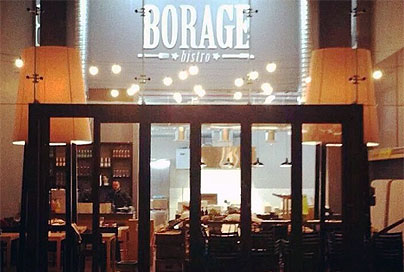 There’s been talk on the street that a certain big-name gastronomist (can you spell Blumenthal?) had opened a restaurant in Cape Town. While this would have been pretty exciting, the truth has the potential to be even more so: an up-and-coming young chef who trained and worked under Heston Blumenthal has set up shop at his own bistro, Borage.

Namibian-German chef Frank Marks worked at The Fat Duck (former no. 1 restaurant in the world) for two years before coming to Cape Town for a stint at The Pot Luck Club. Borage, named after the blue-flowering culinary herb, is Frank’s first venture at the helm of his own kitchen, backed by an investment banker business partner and managed by Dennis Molewa, who looks after marketing and front-of-house.

Dennis explains that the restaurant is based on a typical French-style brasserie found in Paris, where you can pop in for ‘proper’ croissants and crisp sandwiches with meats and melted cheese. There’s also the top-drawer fare that demonstrates the calibre of the chef and his full-fledged team in whites.

The pastry chef at Borage bakes croissants, pain au chocolat and brioche from scratch and, for now, orders in bread from Woodstock Bakery until an oven and a qualified baker – apparently a scarcity in the city – can be secured.

Despite being open for only a few weeks, the kitchen has the full complement of staff, from head chef to sous chef and chef de partie. The uniformed pros bustling around the open-plan kitchen serve as a reminder that you’re not here for ordinary fare in overflowing portions. Borage is very definitely pitched at food lovers and the well heeled.

The breakfast options include French toast, eggs Benedict and a French bread basket containing a croissant, pain au chocolat, mini brioche and baguette, along with spreads and seasonal preserves. The other set options are salads and hot and cold sandwiches, with toppings like prosciutto, gruyère, chicken, bacon and colby cheese. All the sauces, jams and syrups are made in-house; the ingredients are chosen according to season; and locally grown products are used where possible.

The ever-changing blackboard menu features about six fine-dining options, which we opt to try on our lunchtime expedition. A tomato soup with basil and pickled lemon (R60) makes an appearance as does kingklip* with roasted potatoes and beetroot gel (R106), but we decide on the pork belly with buttered mash (R106), paella (R100), sweetbreads (R95) and the roast chicken pie (R75).

Happily, the pork belly is delicious, and the accompanying mash particularly smooth. The paella is not the rustic jumble of veggies, rice and seafood scraps that you might expect. A delicate leg and breast of quail, perfectly cooked kingklip*, butter-fried calamari tubes and a single prawn nestle on a bed of almost-luminous saffron risotto, dotted with cucumber-and-basil foam and pea shoots. The dish is superbly presented, sporting subtle flavours and utterly delicious textures.

A reward for the braver diner, the veal sweetbreads are sublime: little crumbed, fried morsels are served with chunks of roasted cucumber, which cut the richness beautifully. 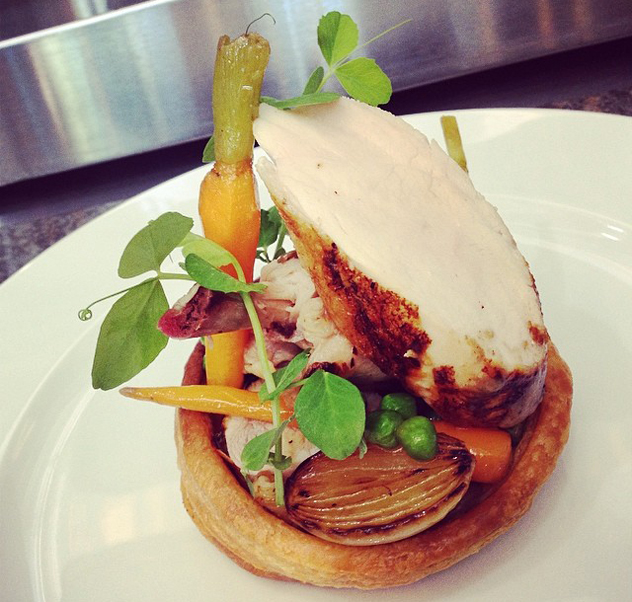 The chicken pie is known to sell out soon, so make sure you get there before the noontime rush hour to sample it. You’ll find no thick pastry with familiar oozy filling, but rather a deconstructed approach to this old favourite. The buttery pastry is fashioned into a round nest that holds some wonderfully tender pieces of chicken on the bone, peas, the softest baby carrots and tangy onion petals for a piquant crunch. The gravy is drizzled from a tiny jug at table. It’s scrumptious and as good to eat as it is to behold.

The dessert options are limited to a cheese platter and a lemon tart, but the latter is a perfectly balanced sweet-sour treat with a sugar-glaze crust.

As the restaurant is open during daylight hours (from 7am-4pm), alcohol’s not going to be consumed in massive amounts, says Dennis. However, the licencing paperwork has been submitted, so hopefully we won’t have to wait too long before being able to sip a glass of bubbly on the deck outside under the trees. The team is currently doing tastings and will be stocking some champagnes, noteworthy Italian whites and local reds (most likely from Constantia), as well as Pimm’s and candy-red Aperol spritzer. As far as hot drinks go, the flat white cappuccino (beans from Truth) comes highly recommended, as does the rich and super chocolatey Belgian hot chocolate – pure bliss – that’s also available as a takeaway. 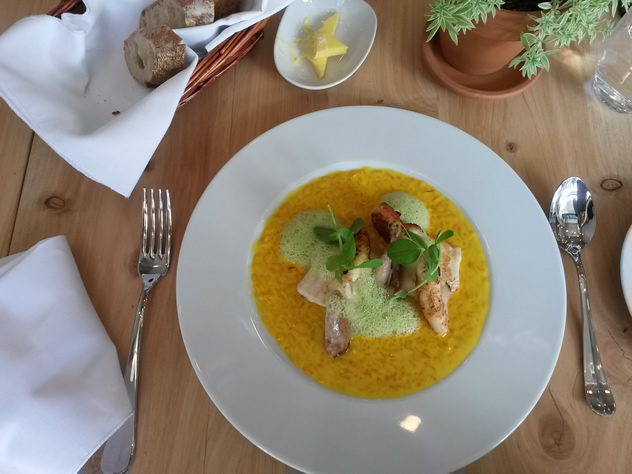 This is a very elegant eatery that lends itself perfectly to smart business lunches or a celebratory daytime meal. With food this good, we’re hoping they’ll open for dinner soon…

*Kingklip is on the SASSI orange list, but we called Just Island Foods, Borage’s supplier, who explained that the fish is a by-catch of hake, i.e. it is not targeted as a species, but up to 5% of a hake haul is allowed to be kingklip, and that is sold on.

Have you been to Borage yet? Why not write a quick review?